How could a US ambassador die because of a YouTube clip? Alas, the answer is: Why not? In the global age, it seems that not only dictators can direct history to the edge of an abyss, but also fruit vendors and lousy filmmakers.

"Facebook is now the third largest country on earth and surely has more information about its citizens than any government does," the magazine noted. "Zuckerberg, a Harvard dropout, is its T-shirt-wearing head of state."

Assange, founder of the whistleblower website WikiLeaks, on the other hand, undermined entire nation states' public narratives of themselves by providing a platform where individuals can anonymously whistle blow and show their government's dark underbellies by uploading top secret documents. Spy agencies can only look on with envy and alarm. 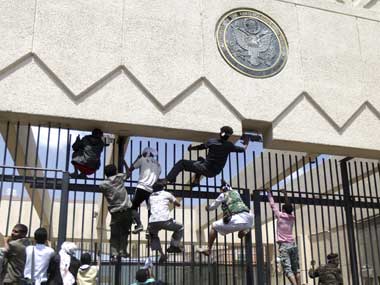 An unknown amateur filmmaker until this week, fanned the flames in the Middle East with incendiary video clips. Reuters

In 2011, a fruit vendor made the cut. Mohammed Bouazizi, a Tunisian who set himself on ablaze protesting police corruption, became literally the torch that lit the Arab Spring revolution that spread quickly throughout the Middle East. Bouazizi achieved this in his very public death because many who had cell phones saw it and the subsequent videos kick-started the uprising. The revolution took all governments by surprise.

This year no doubt Time can add "Nakoula Basseley Nakoula," aka "Sam Bacile," as a major contender. An unknown amateur filmmaker until this week, fanned the flames in the Middle East with incendiary video clips. In effect, the film mocked and insulted the prophet Mohammed and turned the whole Arab Spring of 2011 into Autumn Rage of 2012 Against the USA.

Nakoula/Bacile is currently in hiding and may in fact be fictitious. Much evidence now points to him as a Egyptian Coptic Christian, who allegedly holds grudges against Islam. On Thursday, US Attorney GeneralEric Holder announcedthat Nakoula was convicted two years ago on federal charges of financial fraud.

The jury is out on who instigated the violence against US personnel in Libya, resulting in the death of the American ambassador and three other personnel. The attack was carefully planned, it was reported, and not the mere work of angry protesters - but few doubt that the film has a direct effect in stoking a combustible anger in the Middle East against what many consider as yet another American act of profanity against the sacred.

In the global age, it seems that not only dictators or overzealous elected heads of state with power of preemptive strikes can direct history to the edge of an abyss, but also fruit vendors and lousy filmmakers.

If Zuckerberg is a kind of head of state of the third largest country and Julian Assange has become the equivalent of a CIA institution gone rogue, then Bouazizi, a private individual, has become the modern equivalent Joan of Arc.

Soon, too, the director of Innocence of Muslims, whoever he is, will become a kind of knuckle headed hater, who nevertheless emerged with the extraordinary power to incite violence against America. That would make al-Qaeda, by comparison, seem a tongue-tied shyster.

For all its planning, for all its propaganda and brainwashing of the illiterate and easily duped to blow themselves up - merely to garner dwindling media attention in the West --Al-Qaeda hasn't achieved what an inane video has. The film and its 13-minute YouTube trailer quickly undermined much of the United States' soft diplomacy in a region it considers of utmost important.

In a blog for theBoston Globe,a friend of slain Ambassador Chris Stevens shared her shock with this headline: "How could Chris Stevens die because of a YouTube clip?" Alas, the answer is: Why not? In our information age, the break up of a virtual friendship can lead to suicide, and misinformation can create a real lynch mob, half a world away.

A while back, Robert Young, an Internet entrepreneur, noted, "People around the world are now learning how to leverage the incredible power inherent in the URL to create what is essentially a parallel universe of digital identities."

What he didn't predict is that people do not only leverage URL power for self-promotion or product sales, but to change the outcome of world history. While governments worryabout sophisticated cyber terrorism, a virtual town square is now available to any second-rate hater willing to desecrate what others consider sacred in order to push the buttons that might lead to mass protest.

It is important to note that within the 24-hour period after Ambassador Stevens and his staff occurred in Libya, Apple came out with its iPhone 5 version. "Larger, meaner, faster" is how one reporter at the convention described it. In the same news cycle, CNN published article with this headline,"How Smartphones, Tablets Make Us Superhuman."

"The Agricultural Revolution took thousands of years to run its course. The Industrial Revolution required a few centuries. The Information Revolution, propelled by mobile technology will likely reshape our world on the order of decades," notes Saylor. "But despite the turbulence ahead, we live at one of the greatest times in history. Software will suffuse the planet, filling in every niche, and exciting opportunities will lie everywhere."

And so are the risk factors as the magic wand of history is bestowing incredible power to private citizens, to fruit vendors and hateful amateur filmmakers. Through the digital world people can attain real power to speak beyond their own geographical constrains. Erstwhile, unknown singers and performers can become famous practically overnight with a well-placed YouTube video. And haters can pinch the right nerve endings at the most vulnerable time so American missions anywhere at distant place can go up in flames.

Nation states are being stunned by the swiftness with which social media can change the outcome of world events. Excited copycats are waiting in the wing. Why not make a false video showing Japanese killing Chinese on Dao Yu island? Why not show blurry videos of Pakistani soldiers raping Hindu women in Kashmir? The list is endless.Of course, there is only fairness in the law of exchange. Assange is now in virtual house arrest in London, living in a tiny space in Ecuador's embassy, as he is a wanted man in the United States and elsewhere. Bouazizi is, of course, dead.

And this moronic filmmaker, whose identity is yet to be fully determined, is now in hiding, perhaps for good. Lawsuits and arrest may follow, death threats are only to be expected. He will learn soon enough: There's a price to pay if you incite in these global days.

Still, this amateur with a camera crew and a group of funders has made his point. No longer do heads of states and sophisticated terrorist organisations have the monopoly of power to press those dangerous buttons. Those buttons are available now for those who want to spend $199 or, for swifter downloads and uploads, $399 for the 64 GB version of the latest iPhone.

New America Media's editor, Andrew Lam, is the author of "East Eats West: Writing in Two Hemispheres," and "Perfume Dreams: Reflections on the Vietnamese Diaspora." His next book, "Birds of Paradise Lost," is due out in Spring, 2013.