The Cupertino-based company has just announced that it will be making its own chips for the Mac lineup of computers from early 2020.

Apple is at it again.

The Cupertino-based company has just announced that it will be making its own chips for the Mac lineup of computers from early 2020. This will replace processors from Intel which have been powering Mac computers since 2005, before which Apple used the IBM-made PowerPC chips in its Mac systems. Back then, IBM processors just weren't competitive enough when compared with the Intel chips. They also ran hotter and used a lot of power, something over which Intel chips had a definite advantage.

According to a report in Bloomberg, the initiative has been code-named Kalamata and is in the development phase at the moment. It is part of Apple's larger strategy to make all Apple devices such as Macs, iPhones and iPads in-house, on both the software and the hardware front. According to executives familiar with the matter, the project will involve a multi-step transition.

Naturally, this news has hit the Intel stock adversely. It dropped by close to 9 percent when the news was out about Apple's plans. This is the steepest fall in Intel share prices in two years. Apple provides Intel with 5 percent of its annual revenue according to Bloomberg supply chain analysis.

Apple is not new to making its own custom components for its devices. The iPhones and iPads are powered by custom Apple AxX chipsets alongside the M-series co-processor. The Apple Watch houses the Apple S-series dual-core chip which is paired with the W-series wireless chip. What powers Apple TV? Yes, again, a custom Apple AxX chip. Apple's decision to go with its in-house chipsets on mobile phones has made Apple a class-leading brand when it comes to the raw performance of its devices. The Apple A11 Bionic chipset seen on the iPhone 8 / 8 Plus and X saw Apple have its own custom GPU inside as well, and we have all seen how the performance numbers have set a benchmark. This integration between the hardware and software makes Apple immune to the higher-the-better numbers game that we see a lot of Android smartphones indulging in.

And if you have been following reports over the last couple of years, Apple wants to make more components in-house to reduce its reliance on third-party suppliers.

Apple wants to replace Dialog semiconductors and make its own battery-saving chips. Dialog Semiconductor share prices dropped by about 24 percent after this announcement.

Apple wants to replace Imagination Technologies and make its own graphics chips. Imagination was subsequently sold off in two separate deals. The sensors in the Notch supporting FaceID

Apple is even testing its own microLED display technology to be used in future devices such as the Apple Watch. This news also affected share prices of display makers such as Samsung Display, Japan Display Inc, Sharp Corp and LG Display.

Apple makes the sensors for the TouchBar and the TouchID sensor on its MacBook Pros and that runs on ARM chips. The secondary ARM chip is meant to keep essential services running when the lid is closed, and the laptop is in low power mode.

You can see the trend clearly.

According to a report in Nikkei Asian Review citing industry sources, apart from the fingerprint chip for TouchID, the Bluetooth chip used in the AirPods and the core processor designed in-house, Apple wants to invest or design in-house the touchscreen sensor, the display driver IC, the baseband chip, the power management chip, and the NAND flash memory chip. Affected chip suppliers are likely to include Intel, Synaptics, Skyworks, Broadcom, Samsung, Micron, SK Hynix, Toshiba, Dialog Semiconductor and Imagination Technologies.

Why is Apple doing this?

Apple has known to be ensuring that its consumers are deeply invested in the Apple ecosystem. To that extent, a lot of the Apple users are behind a walled garden, where if you have Apple products, the communication between them is seamless with features such as AirDrop, Continuity and more. Try interfacing non-Apple devices with Apple devices and you realise that you will have to jump through some hoops to achieve the same objectives.

Apple's software stranglehold is quite evident with its macOS, iOS, tvOS and watchOS ecosystems. Barring Intel processors inside its Macs, Apple makes its own chipsets (on technology based on Arm Holdings) for running the iPhones, iPads, Apple TV and the Apple Watch. The seamless communication between its mobile products is a great indicator of how important it is for Apple to have complete control on not just the software but also the hardware. Also, making its own chipset for Mac makes sense if Apple wants to be independent of the Intel processor release cycle — thereby giving it the flexibility to decide the Mac refresh cycle based on its production strengths.

Speaking to Bloomberg, an analyst with Cross Research, Shannon Cross said, "It makes sense that they’re going in this direction. If you look at incremental R&D spend, it’s gone into ways to try to vertically integrate their components so they can add more functionality for competitive differentiation." Another reason, that is obvious, is the advantage it would give Apple over the competition if it made all its products in-house with complete control over hardware which outsiders have no access to. Today, whether it's the Intel chips in Macs or the Samsung-made OLED display on the iPhone X, there is nothing stopping competition from using these same components and improving on them. In the personal computer space for instance, if Apple goes ahead with its in-house chipset, that will immediately differentiate it from other OEMs who use Intel chipsets to power their laptops and desktops.

By doing this, Apple has the complete freedom to tweak the component tuning to its advantage. Apple won't have to play by Intel's rules to say improve the battery life on it Macbook's or optimise the code on its native programs to ensure it works optimally with Intel processors. All said and done, Apple is just one of the customers of Intel, so there is little incentive for Intel to make a separate processor lineup for Mac systems.

The holy grail of iOS and macOS integration, which has been talked about for a while now, could finally be becoming a reality if Apple does have its own hardware powering both these product lineups. As of today that isn't possible simply because while the chips inside the iPhone and iPad are Apple-made, those inside the Mac are made by Intel. Microsoft tried doing that with a Universal Windows Platform, where an app designed for the PC would also work on the phone and vice versa. Knowing Apple, it can take that idea to its logical conclusion, making it mainstream with a synergy in its hardware and software. In fact, Apple is already working on this idea with its Marzipan platform. With an Apple made processor inside a Mac, this platform could just get the much-required boost it needed to make universal apps on iOS and macOS a reality.

Late last year, Qualcomm announced its plans to get into the laptop space with the launch of the always-connected PCs which basically run a version of Windows operating system on ARM technology. The prospect of having a thin and light laptop which is always connected has a lot of promise, especially considering the stagnant laptop space. The Snapdragon 835 is a powerful mobile platform and Microsoft has worked with Qualcomm to optimise Windows 10 S for this platform. All the more impressive is the fact that architecturally, the 835 is based on the RISC (reduced instruction set computing) architecture vs CISC (complex instruction set computing) architecture that the likes of Intel and AMD have offered to the PC. So Apple's rival Qualcomm is pivoting, in a way, in this new category of devices.

What does this mean for Intel?

As has been the case with most Apple component suppliers in the recent past, Intel too saw a drop in its share price by as much as 9 percent, after the news broke. But it ended the day with a 6 percent share price drop. Regardless, Intel is too big a company to feel the repercussions of Apple opting out, as compared to other victims we have mentioned above. For starters, Apple contributes to 5 percent of Intel revenues. In the larger scheme of things that does not amount to much. 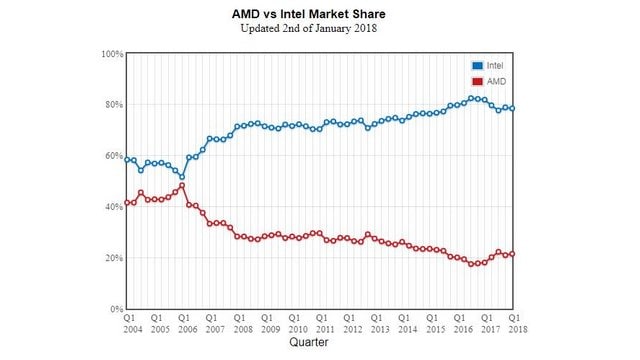 AMD vs Intel market share as of Jan 2018. Image: Passmark

Also, unlike other Apple suppliers which pretty much were specialist companies, Intel has stakes across the board. Intel processors and chipsets power a lot more than just laptops, desktops and servers — although that is a major component of its revenues and profits. Apart from the client side and enterprise side, Intel is heavily invested in end-to-end 5G solutions, internet of things, non-volatile memory solutions, security, field-programmable gate array (FPGA) based solutions and much more. In the core-computing space, it has little competition from its nearest rival AMD.

According to an analyst Kevin Cassidy, who spoke to CNBC, this potential Apple move is not a major threat to Intel. "The market is overreacting to Apple's announcement for using an internally developed CPU for its Mac systems as early as 2020," said Cassidy while claiming that this will not result in other PC manufacturers to make their own CPUs. This makes sense as making your own CPUs requires significant investments, which may be difficult for many laptop OEMs but something that a company of Apple's calibre with its $285 bn cash pile should not have an issue with.

While in the ideal world, this sounds rosy, one needs to note that moving from an Intel x86 architecture based system to something completely new will take its own sweet time. At least such systems will not become mainstream right off the bat when they launch in 2020. One of the reasons the idea behind merging iOS and macOS app ecosystem was the fact that the macOS app ecosystem wasn't growing as much as its iOS counterpart. Completely changing the underlying architecture for laptops and PCs will involve its own onboarding process for the app developers. And to optimise the current macOS apps to run optimally or even better on non-Intel platforms is an uphill task as well. Considering a lot of professionals use iMacs, the expectations to have a flawless chipset which is power efficient and a workhorse will be high as well.

One thing is for certain though. If there is any company which has the potential to pull off a fully vertically integrated hardware and software ecosystem, then it is Apple.