To help parents manage screen time for their kids, Apple has announced new tools built into iOS 12 that will let them take control of the time children spend interacting with iPhones and iPads. 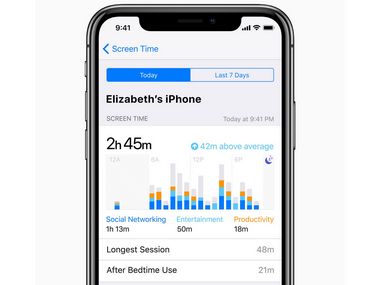 The new features, to be available later in June as part of the iOS 12 public beta, include Activity Reports, App Limits and new "Do Not Disturb" and "Notifications" controls, the tech giant announced at its Worldwide Developer Conference (WWDC) 2018 here late on 4 June.

"In iOS 12, we're offering our users detailed information and tools to help them better understand and control the time they spend with apps and websites, how often they pick up their iPhone or iPad during the day and how they receive notifications," said Craig Federighi, Apple's Senior Vice President of Software Engineering.

"We first introduced parental controls for iPhone in 2008, and our team has worked thoughtfully over the years to add features to help parents manage their children's content," he added.

The new tools were announced after Apple shareholders Jana Partners wrote a letter in January, asking the iPhone maker to add more parental controls in its devices to tackle screen addiction that is growing among kids.

"With 'Screen Time', these new tools are empowering users who want help managing their device time, and balancing the many things that are important to them," Federighi said.

"Screen Time" creates detailed daily and weekly "Activity Reports" that show the total time a person spends in each app they use, their usage across categories of apps, how many notifications they receive and how often they pick up their iPhone or iPad.

"Parents can access their child's Activity Report right from their own iOS devices to understand where their child spends their time and can manage and set App Limits for them," said Apple.

iOS 12 brings enhancements to "Do Not Disturb", making this time management tool even better by helping people stay in the moment during times like studying as well as during a class, meeting or dinner.

There is also a new "Do Not Disturb during Bedtime" mode to help people get a better night's sleep by dimming the display and hiding all notifications on the lock screen until prompted in the morning.

"Siri can also intelligently make suggestions for notifications settings, such as to quietly deliver or turn alerts off, based on which alerts are acted upon," the company said in a statement.

iOS 12 also introduces "Grouped Notifications", making it easier to view and manage multiple notifications at once.

The new tools will be available with iOS 12 this fall (between September and December), said Apple.