Along with a new iPhone 5, Apple unveiled accessories Wednesday that could prove to be a blessing and a curse for customers.

Along with a new iPhone 5, Apple unveiled accessories Wednesday that could prove to be a blessing and a curse for customers: a set of earbuds that are meant to fit comfortably in more people's ears, and a new adapter that will be needed to plug the new phone into older car dashboards and speaker systems.

The new earbuds, called EarPods, are being sold separately for $29 but will be included at no extra charge with the iPhone 5 and the refreshed iPod Touch and iPod Nano.

The company says the earbuds were three years in the making and required scanning hundreds of ears looking for commonalities. They are more elliptical than the current earbuds and have a smaller speaker that points into the ear canal. They also have other ports meant to maximize airflow.

They don't create a seal like other in-ear headphones, but Apple says the audio quality is "just as impressive as what you'd hear from more expensive headphones."

Like the older versions, the EarPods come with a microphone and a remote control on the cord to adjust volume, control playback of music and movies and answer and end calls. 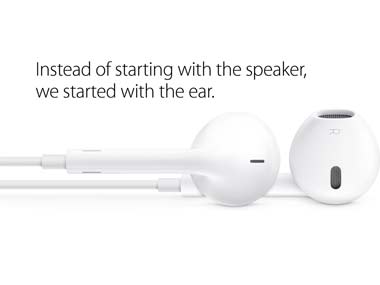 From the official Apple site

One design change that could cause some annoyance is the iPhone 5's new "Lightning" port, through which the device gets charged. It's 80 percent smaller than the 30-pin connector that has been on iPods since 2003 and all iPhones and iPads ever released. It also accepts the new cord's flat connection reversibly, so you don't have to fumble with its orientation as you had to before.

Apple said the new connector is appropriate because the iPhone 5's body is thinner. It is also a feature of the new line of iPod Touch and iPod Nano devices, which were refreshed on Wednesday.

Along with getting the new connector, the Touch adopted the iPhone 5's bigger screen. It is equipped with a better processor and now comes with the digital assistant Siri. Meanwhile, the iPod Nanos have a longer, bigger screen and now have Bluetooth wireless connectivity for streaming audio.

The headache for many people will be making the new Lightning port compatible with the array of peripherals they've collected over the years. Apple says speaker makers such as Bose and JBL are working on new docks and speakers for the connector.

In the meantime, you'll need a separate $29 adapter that turns the port into the old 30-pin connector, a $39 cord that does the same or a $19 USB cord that connects to the Lightning port. These seemingly small changes could result in big costs to consumers.

Velti PLC, a mobile advertising company, said the cost to consumers could reach around $400 if they purchase an iPhone 5 and then decide to buy a new screen protector ($15); case ($29); belt attachment ($45); speaker system ($250); adapter ($29); spare USB cord ($19); and car charger ($25). "It is a bit annoying," said Velti's chief marketing officer, Krishna Subramanian. But he said connection issues may soon become a thing of the past as more accessory makers adopt wireless standards like Bluetooth and Wi-Fi.

"It's one of those inconveniences that you're pleased about in some ways because ultimately you as an end consumer are benefiting," he said. At least the new attachments still come in Apple's signature color: white.