As per the patent itself, we learn that it was filed back on 8 September 2016 which happens to be a day after Apple launched the iPhone 7 and 7 Plus.

If keeping your keyboard clear of dust, and spills are a menace to you, Apple seems to be working on a solution to that problem. As per a patent, it filed recently, the company seems to be trying to work on a keyboard that resists crumbs and other forms of spillage. 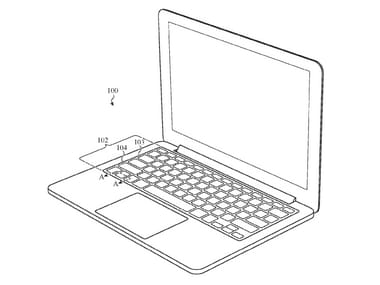 The patent which was made public on 10 March, describes two different ways that Apple seems to be trying to tackle the problem. According to a report by The Verge, the first way is to try and seal the gaps off completely or the second way which involves having a membrane beneath each key that would blow out air every time a key is pressed.

While the keyboards on the MacBook and MacBook Pro are very shallow, it comes with very little travel distance. The problem here is that once crumbs or any form of dirt creeps below the keys, the keys cannot be fully depressed properly. This could be a reason why Apple is actively working on a solution to deal with the problem.

Apple noted in the patent that the moving keys of a keyboard can get harmed by liquid or solid particles.

The company went on to mention, “residues from such liquids, such as sugar, may corrode or block electrical contacts [and] prevent key movement by bonding moving parts.” Based on the information provided in the patent itself, we learn that the patent was filed back on 8 September 2016 which happens to be a day after Apple launched the iPhone 7 and 7 Plus.

We could expect Apple to apply the patented solution in its next refresh of the MacBook and MacBook Pro lineup, but the fact that the patent exists in itself does not guarantee it.