If you've been following any of the iPhone leaks so far, we've known for a while that Apple was very likely launching three iPhones this year and so they have. This year, we have two premium iPhones — the iPhone Xs and the iPhone Xs Max, and a more affordable iPhone called the iPhone Xr. The pricing, however, is what might make tears roll down your face.

The iPhone Xs and the Xs Max will start shipping on 21 September, while preorders begin as soon as 14 September. The iPhone Xr, meanwhile, begins shipping a little later on 26 October. 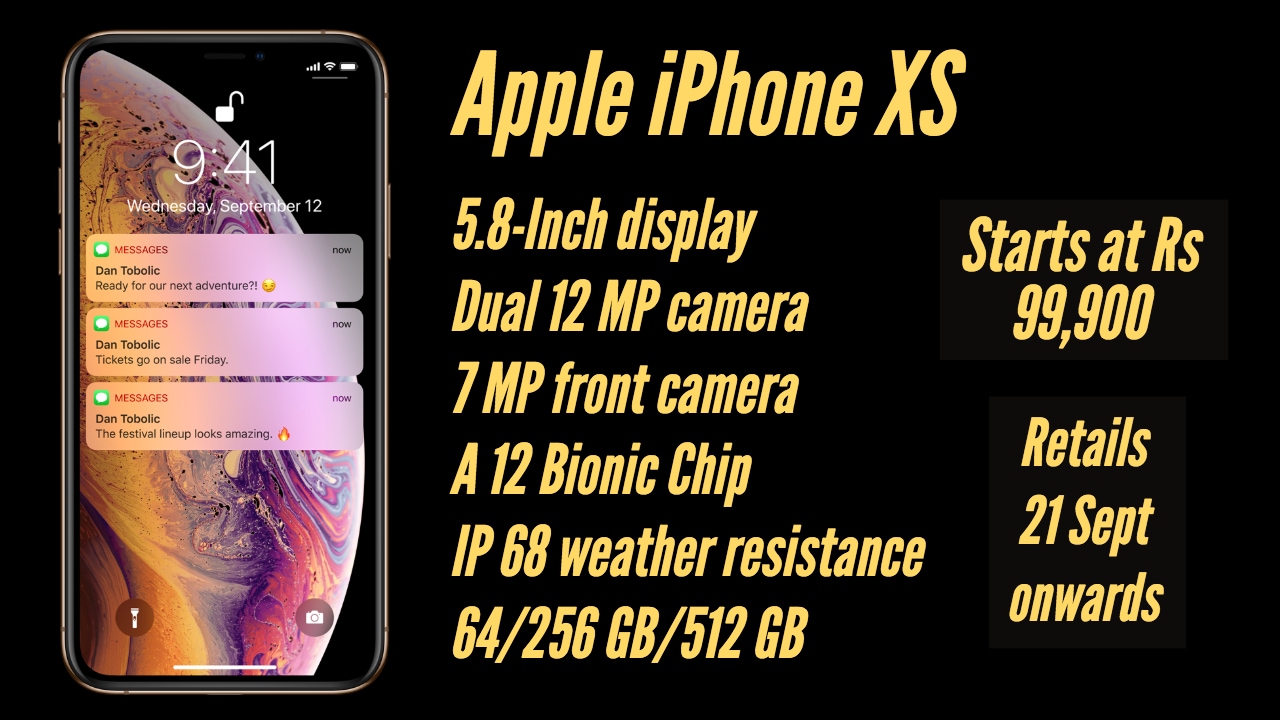 The Xs is basically the S version of the iPhone X.

Other than their respective dimensions, the two premium iPhones are basically identical in terms of feature, differing only in display size and battery capacity.

Dual SIM:
Perhaps the biggest update to the iPhones, at least as far as we Indians are concerned, is that the phones all support Dual SIM dual Standby. Finally.

The exact implementation of the feature is unknown, but from what Apple said on stage, it seems that the phones will use a regular SIM alongside and eSIM for delivering this functionality. Of course, your carrier will have to support eSIM for this to work. Thankfully, Airtel, Vodafone and Jio appear to be supporting the feature as their names were displayed on stage.

Airtel, Jio and Vodafone already support eSIM on the Apple Watch Series 3 LTE, so it's expected that they will support the new iPhones.

A Chinese variant of the iPhones will support two physical SIMs.

Build and design:
The phones are identical to the iPhone X in this department. They both feature a stainless steel frame, glass back and support for wireless charging.

Both displays are obviously OLED and feature a pixel density of 458 PPI. Interestingly, the displays support Dolby Vision and HDR10, which means that we might see support for YouTube HDR.

A12 Bionic:
The biggest update to the phones is the new A12 Bionic chip. It's the world's first 7 nm chip and is packing in a whopping 6.9 billion transistors and a total of 18 cores. Six cores are CPU cores, 4 are GPU cores and 8 are dedicated to the Neural Engine for AI tasks.

Of the 6 CPU cores, 2 are high-performance cores that are apparently 15 percent faster than the previous generation core. The 4 high-efficiency cores are claimed to be 50 percent more efficient. The biggest bump comes in the GPU department, which is claimed to be up to 50 percent faster. The GPU is Apple's in-house design.

The Neural Engine (NE) is the most exciting bit of the new design, though its true power will be seen only later when more apps are out. According to Apple, the new chip is about 10 times faster than the A11 Bionic on the previous phones.

In demos shown by Apple, the Neural Engine was used by developers to do things like track objects, vastly improve camera performance. The Neural Engine is also the reason we have a 512 GB storage option.

Apple also says that the Neural Engine increases the performance of the Face ID sensor. 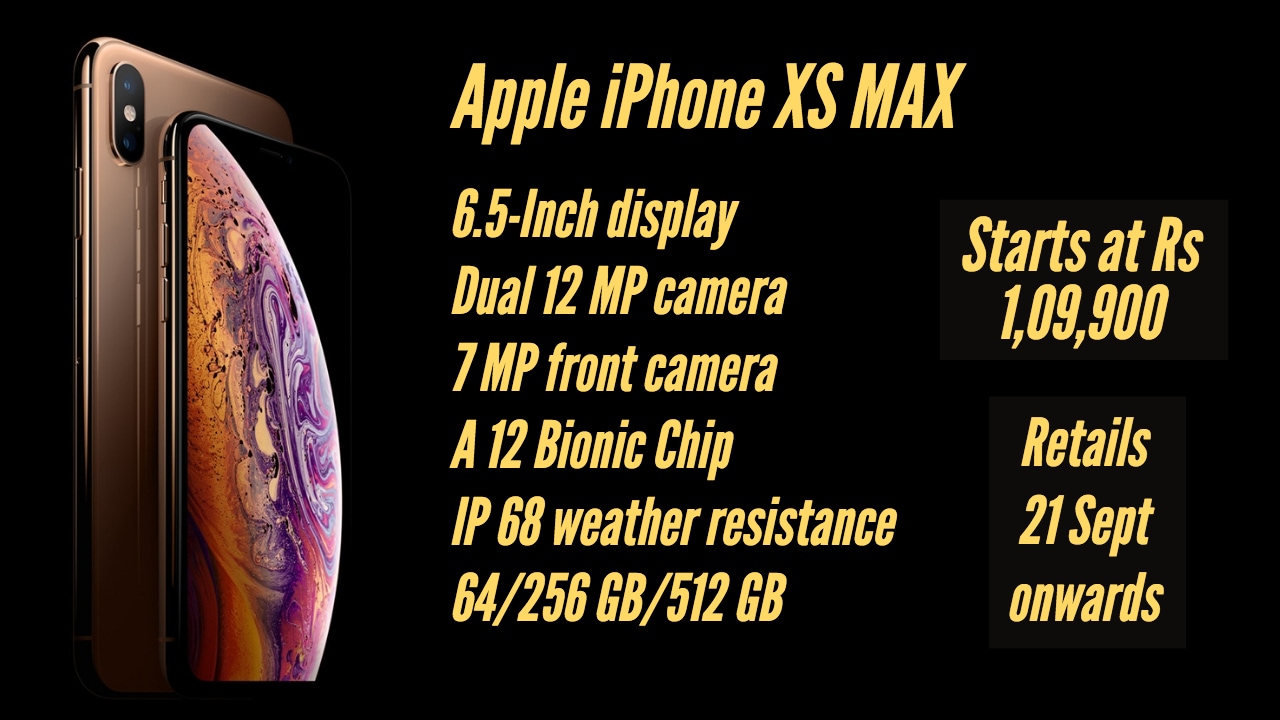 The larger iPhone features a 6.5-inch display, but it's only the size of the iPhone 8 Plus.

A new update is a feature called 'Depth-Control', which lets you adjust the background blur using a virtual aperture slider. This slider can simulate apertures ranging from f/1.4 to f/16. AI updates also mean that features like Portrait Lighting are improved

There's also a new Smart HDR mode that is said to dramatically improve low-light performance as well that of images in tough lighting conditions. The camera can recognise faces, determine the best lighting option based on a face and make depth maps based on the captured data.

The front camera remains the same at 7 MP f/2.2, but now features stabilisation. It can also record 1080p video. Since the Face ID sensor is on all cameras, Portrait Selfies are now supported.

Battery Life:
Apple says that these phones will last about 1.5 hours longer than the phones they replace. 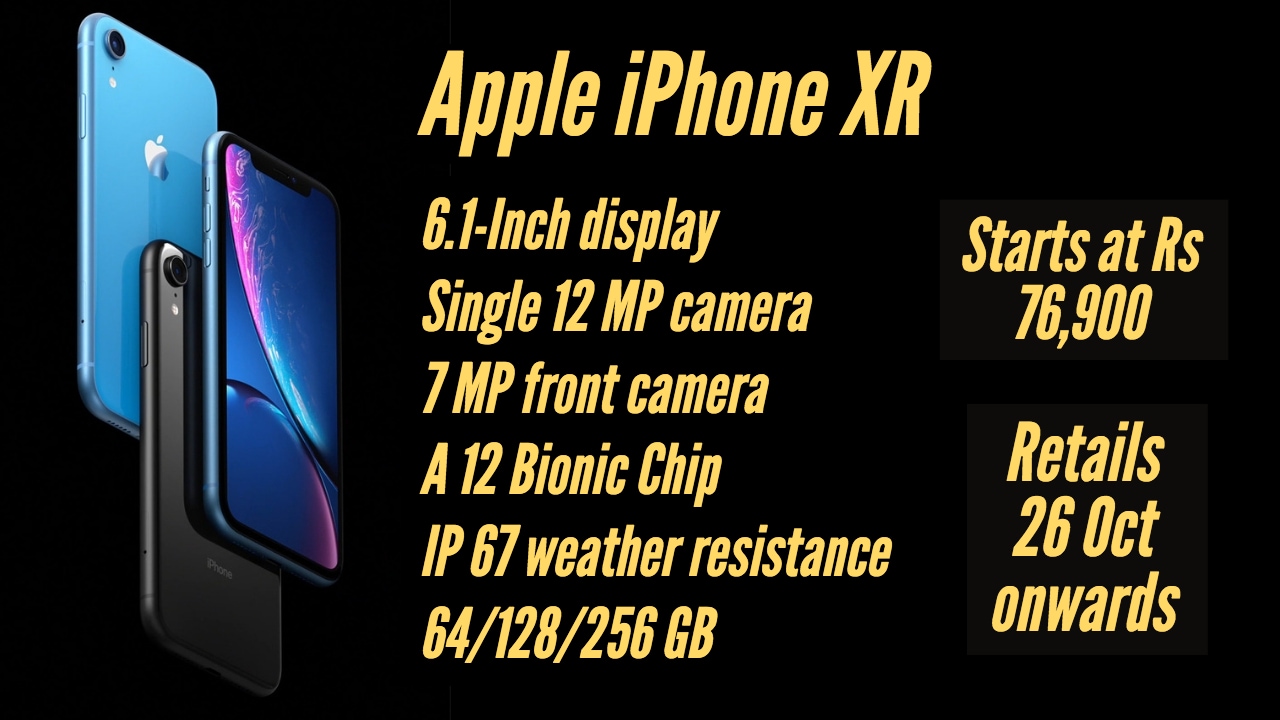 The cheapest of the new iPhones has the same software features as its more expensive cousins.

The cheapest iPhone of the bunch cuts back on the hardware but retains all the software features of the expensive iPhones. The display is now a 6.1-inch LCD unit with a resolution of 1792x828. This is surprisingly low but translates to 326 PPI, which is acceptable.

Apple is calling this a "liquid retina" display and say it's the largest LCD ever on an iPhone. The phone is smaller than an iPhone 8 Plus.

The frame on this phone is made from aluminium rather than steel and the back is made from glass to support wireless charging.

The phone also takes a hit in the camera department with Apple opting for a single lens unit on the rear. Thankfully, while the rear camera lacks a 12 MP tele lens, its 12 MP f/1.8 wide-angle camera is identical to the ones on the Xs and Xs Max. Better yet, Portrait Lighting and adaptive bokeh modes are still supported, just as they are on the single lens Pixel 2 smartphone.

The colour options are also far more interesting and include White, Black, Blue, Yellow, Coral and even a (PRODUCT) RED edition.

An area of concern is the contents of the box your iPhone will come in. Judging by Apple's website, it seems that Apple has dropped the Lightning to 3.5 mm adapter, which is essential for connecting any sort of headphone