Apart from the iPhone 8, the iPhone 8 Plus, and the iPhone X, eight previous iPhone models will support an upgrade to iOS 11.

At the tenth year anniversary of the launch of the iconic iPhone, Apple revealed details on the availability of the public release of iOS 11. The new iPhone models will all ship with iOS 11 out of the box. Users with compatible iOS devices will be able to download iOS 11 from 19 September onwards. 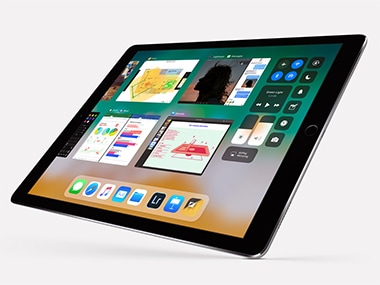 One of the biggest features of iOS 11 is support for augmented reality applications through Apple's AR Kit. A number of early applications already show off the capabilities of AR Kit, which definitely look promising. The kit allows developers to overlay 3D or 2D shapes on top of real world objects. Some of the advanced capabilities of the kit include support for realistically adapting to ambient lighting conditions, and draw shadows appropriately.

Apart from games, augmented reality applications promise to be practical as well. If there is no scale or measuring tape around, AR apps can be used to measure distances between two points. Users can also check out the actual sizes and dimensions of products sold on e-commerce platforms.

Google's AR platform, Tango, is available only on a select few Android devices, and the rollout of iOS 11 promises to bring AR technologies in the hands of hundreds of millions of Apple users around the world. The true capabilities of AR Kit will only come to the fore on devices with depth-sensing capabilities, however. The new A11 Bionic chip in the iPhone 8, 8 Plus and X is also optimised for AR work, says Apple.

Apple is finally bringing a file manager of sorts to iOS 11, with the new Files application. The app brings all the files together, for both locally stored files as well as files stored on cloud services. The listing of files includes files stored on iCloud as well as third-party cloud hosting services such as Box, Dropbox, OneDrive, Google Drive and others. Files stored locally on one device will be available on other Apple devices where the user has signed in with the same Apple ID. For better organisation, the files can be tagged. The tags are colour coded and individual files can be tagged with multiple tags. Live Photos have now been improved with a number of features to make them more expressive. Two new features create repeated looping moving pictures, known as Loop and Bounce. Loop replays the same Live Photo over and over again, while Bounce slingshots back and forth like Instagram's Boomerang. Users can choose their own Live Photos to turn into Loops, but the device also suggests Live Photos that can be converted into great Loops.

The Long Exposure feature converts a Live Photo into a light painting, similar to an extended exposure on a DSLR. The camera application now has a number of filters that can make your photos look professional. A number of these filters are specifically meant to enhance portrait photographs. Apple did demo a new 'Portrait Lighting' feature at the iPhone X launch. This feature uses the dual camera setup on the rear of the iPhone 8 Plus and iPhone X, and the front camera setup on the iPhone X, to map your face in 3D and create contextual lighting effects. These effects are said to replicate various studio lighting setups.

For now, it looks like the feature will only be available on the new iPhones. The iPhone 7 Plus may not get the feature because it doesn't contain the A11 Bionic chip. Also, Portrait Lighting is still in beta and will not be available with the first release of iOS 11.

Apple has indicated that it has implemented new image compression algorithms that provide the same quality of photographs, yet taking up only half the file size. There are a number of new video modes, including native support for 4K 60 fps recording and 1080p 240 fps recording.

The Scan and Sign feature allows users to capture images of documents with ease. The document scanner feature is in the Notes app and device automatically removes glare and corrects the tilt of the camera at the time of snapping the picture. The device can also automatically crop the image to exactly fit the dimensions of the scanned document. Once a document is scanned, the Apple Pencil can be used to fill in any forms or sign the document before sharing it.

As with every new iOS release, we're going to see the arrival of a few new wallpapers. Some of these wallpapers will be exclusive to the iPhone 8 and iPhone X of course, but older devices should also get some new ones. In fact, leaks suggest that the iPhone X will get some OLED-specific wallpapers to go with its new OLED display.

I am so feeling these new wallpapers pic.twitter.com/vJIF3ColM2 — Steve T-S (@stroughtonsmith) September 9, 2017

The emoji have also been improved, and are now more expressive as they are animated and in 3D. Better yet, the TrueDepth sensor on the iPhone X can be used to animate the emojis, create custom animated messages, etc.

Several improvements and enhancements have given the App Store one of the most significant makeovers since its launch. For iOS 11, Apple engineers have rebuilt the App Store from the ground up. The App Store is really the heart of the device, opening up a whole world of new possibilities. However, those who have had classic and legacy applications may face problems as 32-bit applications will not run on iOS 11. There is no way to use these applications if you upgrade to iOS 11.

There are three new tabs to aid in the discovery of new applications, which stand to benefit the end users as well as developers. The Today tab features hand-picked applications that are trending or in the news for some reason. The Games tab has a selection of the latest games curated by expert gamers. The Apps tab showcases new applications that the Apple editors were attracted towards.

Apart from the new tabs and sections, there is also a new App of the Day and Game of the Day listing, which is updated every day. The expanded search allows users to search through the editorial stories, the lists as well as the tips and tricks. The App Store listing will indicate an application that is on top of the charts. There is now an improved ratings system, where developers can directly answer questions that users may have.

One of the exciting new features in the new iOS Maps is the ability to check out detailed maps and floor plans of the interiors of airports and shopping centers. You can find out places to eat or shop within these large buildings, before even reaching the location. Detailed indoor maps are available of hundreds of shopping centers and airports around the world.

Another interesting feature is the automatic do not disturb mode that kicks in when a user is driving. The users simply have to start driving to initiate the feature. No notifications will be shown while you are driving, and those attempting to contact the user can be automatically notified of the fact that the person that they are trying to reach is behind the wheel.

Sadly, Apple hasn't commented on any specific enhancements to Maps to make it more useful in India. Until that happens, Google Maps will always be the better option.

You can now ask Siri to translate phrases from English into German, French, Italian, Chinese and Spanish. Siri now anticipates what you are about to type and makes smart suggestions as you type. Siri can suggest names of movies, of places, or estimate the arrival time when you tell your friend that you are on your way. On confirming travel plans or appointments, Siri automatically prompts you to add the engagement to your calendar. The suggested searches on Safari now vary according to the articles that you were just reading. Siri also acts as a personal DJ now, playing back songs that you already like, or are likely to like. You can now ask specific questions related to a track to Siri, such as the name of the band or that of the lead vocalist. Multitasking and the Apple Pencil

Enhancements for the iPad

There are a number of features coming in iOS 11 that are meant specifically for iPad users (finally). There is a new dock that can be accessible while using any app. The dock can be customised and smart suggestions based on recent activity appears towards the right side of the dock. Recently used applications on a Mac or an iPhone appear in this section of the new dock.

It is now easier for users to multitask and keep two applications running concurrently on the screen. Users can simply drag an app from the dock to a side of the screen to place the app on that portion. There are two views possible for multitasking, the 'Slide Over View' and the 'Split View'. In the Slide Over View, an app is placed on top of another application running in fullscreen mode. In the Split View, a majority of the area is taken up by one app, while the other appears as a sidebar. Users can also drag and drop files directly from one application to another.

There is a new instant markup feature for the Apple Pencil on the iPad Pro. Users simply have to start writing, drawing or scribbling on any screen to take a snapshot of the screen, along with the markups done with the Pencil. Users can also start writing on the lock screen with the Pencil to instantly initiate a note. The creations are saved in the Notes app. Users can also sketch in the notes app, with the text moving automatically out of the way. Handwritten notes can now be searched through, using the regular search function. In line drawings are supported for emails as well.

Which devices will support iOS 11?

Apart from the iPhone 8, the iPhone 8 Plus and the iPhone X, eight previous iPhone models will support an upgrade to iOS 11. The supported devices are:

The supported iPad models are:

The sixth generation iPod touch will also be able to receive the update to iOS 11.

The new OS has rolled out. To upgrade from an iOS device, simply head to the Settings app>General>Software Update and hit Download and Install.

You can also update your device from iTunes. Connect your iOS device to your PC/Mac via its cable and hit the update option in iTunes.

While iOS updates usually go off without a hitch, it's best to take a backup of your device before updating. 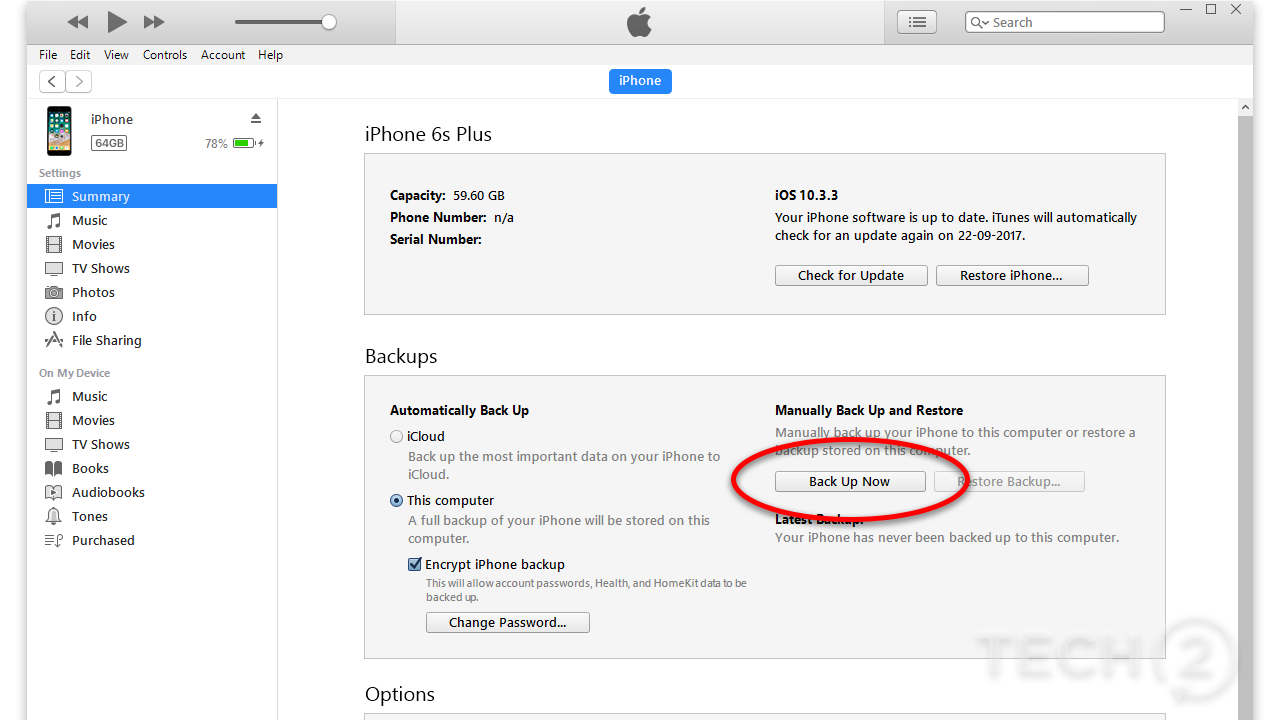 Backing up your iOS device via iTunes

Connect your device to iTunes via its cable and hit the "Back Up Now" under the "Manually Back Up and Restore" section of the phone screen in iTunes.

Once done, feel free to update to a later version of iOS.