Apart from the regular bug fixes and improvements, there are three major additions to AirPlay 2, HomePod stereo pairing and Messages in iCloud.

Apple has just released the iOS 11.4 update and a lot of the new features pertain to the HomePod and the audio capabilities. Apart from the regular bug fixes and improvements, there are three major additions to AirPlay 2, HomePod stereo pairing and Messages in iCloud. 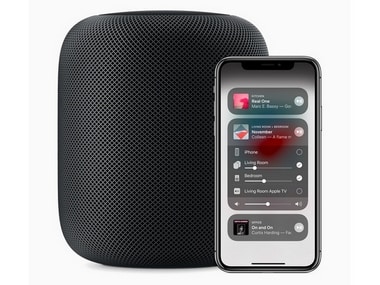 The updates on the AirPlay 2 will let you control your home audio system and AirPlay 2 enabled speakers, letting you play music on multiple AirPlay 2 supporting speakers in your house, in sync. To control these AirPlay 2 supporting features, you will have to head to the Control Centre, Lock Screen or AirPlay controls within the apps on iPhone or iPad. To cut a long story short, this particular feature is to do with multi-room audio. AirPlay 2 will also work with Apple TV. Apart from Apple's own HomePod, around 32 products from six brands will be compatible with AirPlay 2 as well.

"While listening to music, it’s as easy as selecting or unselecting where the music is playing in Control Center, or users can ask Siri to play music in any room, a group of rooms, or everywhere in the home," says the Apple release. Apple Music subscribers can also fire up Siri to play different songs in different rooms or the same song everywhere.

The other major update is the support for HomePod stereo pairing using your iPhone or iPad. If there is a pair of HomePods, the new update will let the HomePod pair automatically sense its location in the room and accordingly perform advanced beamforming for a wider soundstage. Unless you disable the updates in the Home app, HomePod will automatically update to support stereo pairs.

Messages in iCloud is finally available on Apple devices as well. This will let you store your messages, photos, attachments in iCloud and every time you sign into a new Apple device, all your Messages will be synced as well.

Similarly, when you delete Messages on one device, it will be synced across other devices as well, so that you don't have to repeat the process on each device. Your conversations will still remain end to end encrypted. To turn on Messages in iCloud, you need to head to Settings > Apple ID [your name] > iCloud > Messages. You will need to have two-factor authentication enabled. On the Mac, you need to go to Messages app > Preferences  and check 'Messages in iCloud' to turn it on. You will need to do these steps across all devices, for the syncing to work seamlessly. Messages will take up space on your iCloud, but this means, you don't need to have a lot of them on your end devices as they're stored in the cloud.

Messages in iCloud and AirPlay 2 were both features that were announced at WWDC 2017 when the iOS 11 was launched.

Apart from this Apple also released a whole range of bug fixes and improvements to iOS. These include