Apple does not seem to miss the iPod, but do you?

Apple has silently pulled the iPod Shuffle and iPod Nano variants from its store. The iPod product line does not even appear on the top bar of Apple's website. The iPod touch is the only device now available in the iPod lineup. This signals the end of an era for non touchscreen variants of one of the most popular mp3 players ever sold. The prices of the classic devices are likely to rise over time, especially for boxed pieces. The iPod Touch is now available in 32 GB and 128 GB variants, up from 16 GB and 64 GB variants. The devices are powered by the A8 chip, have an 8 MP camera and a "desktop" class GPU chip. The iPods are available in five colours. Even though smartphones have swallowed up the mp3 player and pmp (portable media player) market, some still prefer to use the smaller, pocketable devices for a number of reasons. Some users still prefer to have a dedicated device for listening to music so that it does not eat into the battery life of a smartphone, especially while travelling. For those who want to listen to music while exercising or running, the smaller devices which can be mounted on an arm offer more freedom for movement.

Apple confirmed that it was the end of the line for the iPod Nano and the iPod Shuffle in a statement to TechCrunch. "Today, we are simplifying our iPod lineup with two models of iPod Touch now with double the capacity starting at just $199, and we are discontinuing the iPod shuffle and iPod nano," Apple said. The first iPod was launched in 2001 with an iconic rotating wheel that would be a mainstay of the lineup for seven years. In 2004, Apple launched the iPod Mini, the iPod Nano and the iPod Shuffle, which landed a year later. The iPhone was launched in 2007 and that was when the iPod sales stopped climbing year after year. The launch of the iPhone signaled the downward trend of iPod sales and Apple seemed to have cannibalised its own products. 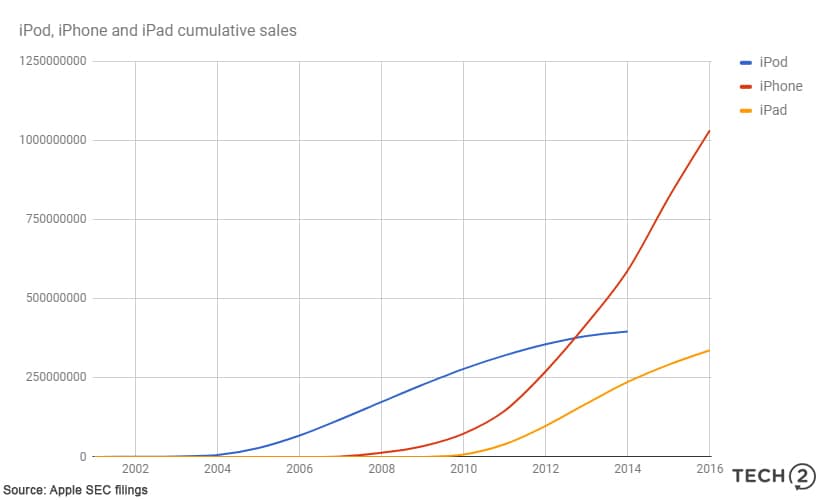 2009 saw the launch of a fifth generation nano with a redesigned body and the smallest iPod yet, the Shuffle, was launched in 2010. The product has remained more or less the same since then. From 2015 itself, Apple stopped reporting annual sale volumes of the iPod and bundled those figures along with a number of others. The sales of "iPod, Apple TV, Beats Electronics and Apple-branded and third-party accessories" were together categorised under "Other Products" in the annual financial reports filed by apple. In 2015 itself, it was time to say goodbye to the iPod.

Apple sold the most iPods in 2008, when it reported sales of 5,48,28,000 units. A year after the launch of the first iPod, Apple sold 3,81,000 units. Compared to that, the iPhone sales in 2007, which was the year of its launch, saw a staggering 13,89,000 units sold. The move to pull devices that have not been updated in nearly 5 years is not surprising. The remaining iPod can support the same applications as the iPhone, ensuring a steady stream of revenue for Apple.

Apple does not seem to miss the iPod, but do you? Let us know in the comments section below.