According to a report by Sensor Tower, in the first six months of this year, Apple had a worldwide gross app revenue of $22.6 billion, whereas the Google Play Store gathered $11.8 billion.

This is actually an ongoing trend, where the Apple App Store has been consistently generating higher revenues than its Android counterpart, despite the number of subscribers being way higher on Android. In 2017 as well, App Store had a total revenue of $38.5 billion, while Play Store had $20.1 billion. Facebook led worldwide downloads in the first half of the year, with WhatsApp, Messenger, and Instagram ranking at the top four apps by combined installs across both platforms.

But of course, factors like the availability of these stores, also make these numbers vary. For instance, App Store is available in China, but Play Store is not.

Further, according to the analytics platform, the consumer spending on the App Store has increased by 26.8 percent, since what was recorded in 2017 in the same period. Google Play Store too has seen an upward graph in terms of spending by 29.7 percent. The increase in spending owes to the increasing number of apps on the stores that demand monthly or annual subscription, like Netflix, Amazon Prime, Bumble, etc.

Consequently, Netflix has become the top non-gaming app with the maximum amount of spending by consumers, in the first half of 2018, noted Sensor Tower. In 2017 as well, Netflix held that position. 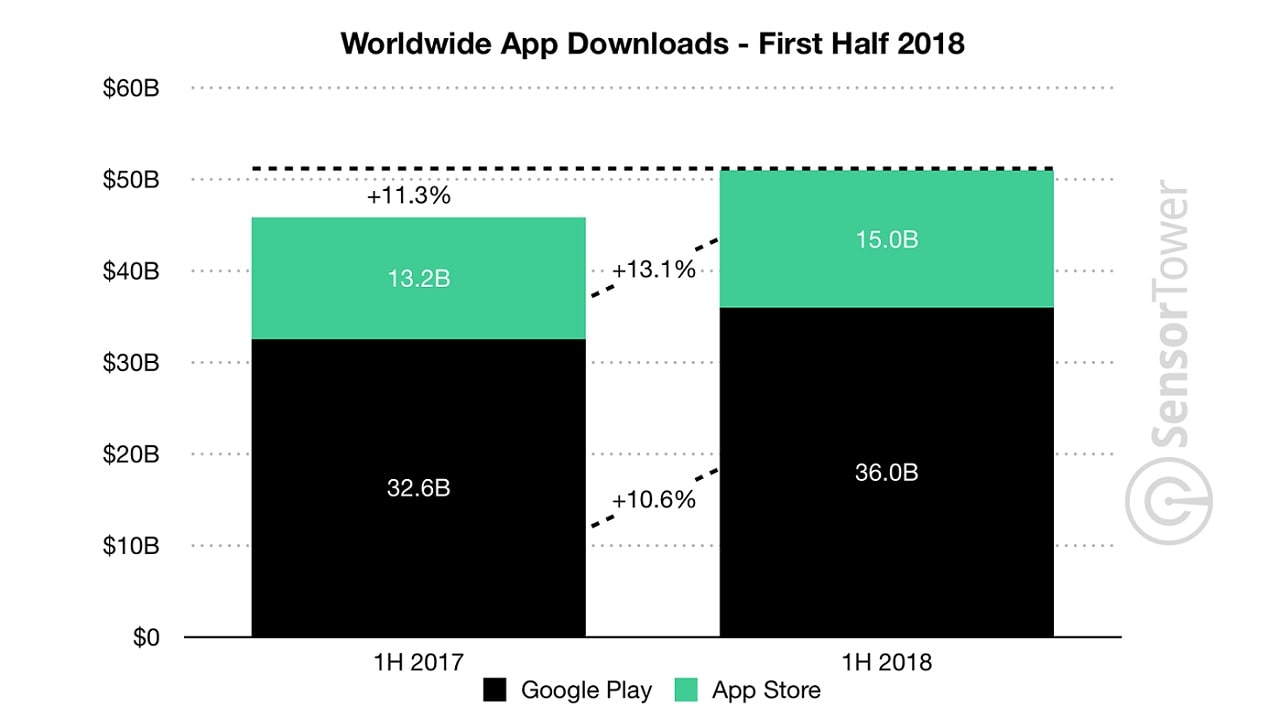 The worldwide game downloads have come to a total of 15 billion in the six months on Play, Store. Credit: Sensor Tower

Gaming apps, however, continue to lead the genre of app consumers spent the most on.

“App Store mobile game spending reached $16.3 billion for the first two quarters of this year, growing 15.1 percent year-over-year. This is compared to $10.3 billion spent on Google Play games during the period, a year-over-year increase of 26 percent,” Senor Tower found.

The worldwide game downloads have come to a total of 15 billion in the six months on Play Store. As compared to that, game downloads on the App Store grew slightly more at 14.1 percent versus the first half of 2017 to an estimated 4.5 billion.

PUBG Mobile, Helix Jump, and Subway Surfers were the three most downloaded mobile games across both stores.