In what reminds us about the Samsung Galaxy Note 7 debacle last year, there have been at least half a dozen cases where batteries of newly-launched Apple iPhone 8 and 8 Plus are swelling and phones are being left split-apart. 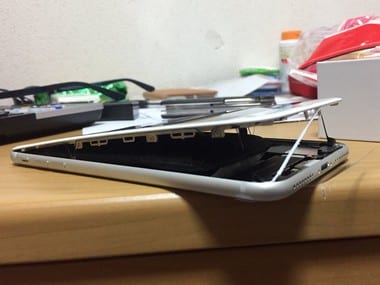 Apple iPhone 8 Plus with a swollen battery. Image: Twitter/@magokoro0511

The first case was reported in Taiwan where a woman found her iPhone 8 swollen apart after plugging it in to charge. The woman had purchased a 64GB "Rose Gold" iPhone 8 Plus and she put it on charge, using the supplied cable and adaptor.

"After about three minutes, she reported seeing the front panel bulge, and eventually lift completely from the device", media reports said. "Someone in Japan then posted photos of a split-apart phone on Twitter. And in the days since, there've been cases in China, Canada, and Greece," The Verge reported on Saturday.

CNET also found at least six different reports in at least five countries of the iPhone 8 splitting along. Apple has issued a statement and said: "We are aware and looking into it."

So far, there have not been any fires but new iPhones are splitting along, exposing the smartphone's internals.

"[Swelling is] very unusual for a brand-new battery and leads toward the direction of there's something fundamentally wrong with this battery," Sam Jaffe, Managing Director of Cairn Energy Research Advisors, told The Verge.

But it could be a few units, say reports, and Apple must be praying not a full batch is affected, that means recalling units, ruining the whole reputation build around iPhones for years.

The pre-orders for "super-premium" iPhone X will begin on 27 October, with shipping starting 3 November.

Last year, the batteries of the Rs 59,900 Galaxy Note 7 started exploding. Samsung counted several such incidents across the globe (over 90 Galaxy Note 7 smartphones owners in the US reported overheating).

Amid conspiracy theories, a global recall of 2.5 million devices was announced quickly and faster replacements were guaranteed.

The fiasco over Samsung's flagship smartphone caused the firm operating losses of some $5 billion.