This week, we curate a collection of the most fun ways (apps) to spend time on your phone: Watch the night sky on Cosmic Watch, play Blood Runs Cold and more...

This week, we curate a collection of the most fun ways to spend time on your phone. Watch the night sky on Cosmic Watch if you live in the city and miss a pollution-free sky. Play Blood Runs Cold, the best hidden-object game we have seen in a long time, perhaps ever. Or indulge in tower defense with Mystic Racer. 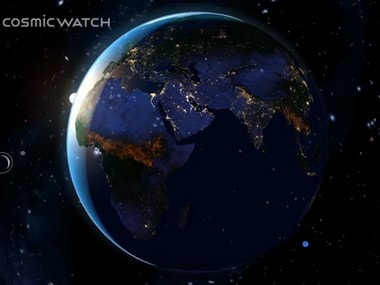 Cosmic Watch is a stellar app which has captured the night sky into the (relatively) tiny screen of your phone. Experience the cosmos in a new way and scroll through time with the touch of a finger. This educational app is perfect for creating a sense of wonder about the Universe in the young and reigniting it for everyone else. Cosmic Watch is an accurate description for this app because of the handy time-control panel. Watch how the sky changes with time in whatever speed you’d like. Slow it down so you can see the constellations drift across your location or speed it up and watch the solar system rotate in a tizzy. There are enough settings to engage you for quite some time. Choose between a celestial orb or open sky, clouds and high-resolution imagery or just an outline of the Earth and more. The app could have done with a little guide to explain how it works, but if you keep tinkering with the menus you will eventually discover all that it has to offer. Cosmic Watch retails at Rs 100 on the App Store.

If you thought hidden object games were lame, Blood Runs Cold will make you reconsider the entire genre. This beautifully scripted game follows a reporter who is being framed for a murder she didn’t commit. Almost everything about this game feels well-thought out, from the dialogues to the art-style. You’ll feel like you’re in a thriller where even finding the hidden objects is purpose-driven. Blood Runs Cold also features a kind of detailed game art that is pretty rare in mobile games. There are cut-scenes which drive the story forward and they keep introducing new characters. The only thing that you won’t like about this game is the points and energy system which stops you from running through the levels too fast. It can get a little too gory at times, so keep this away from younger kids or anyone easily grossed out. Most other hidden object games are two-dimensional and limit your search to a fixed screen. They may even help you out with silhouettes. However, Blood Runs Cold presents three-dimensional levels to you and sometimes the lack of definition in what you are searching for adds to the intrigue. For example, your next objective might be to search for something that you can escape a closed room with. Other characters will help or harm you along this journey to redeem yourself. Even the side quests make sense and are linked to the story.

Caravan War is an intricate tower defense game with some elements of city-building built in. If you love running your own town and managing resources, Caravan War has plenty of it in store for you. What it is also has is solid tower defense gameplay. You can unlock the units needed to steal from the caravans passing by your territory. Place them strategically and see the battle unfold. Caravan War looks gorgeous, with the different classes of warriors and buildings neatly fleshed out. It is definitely a game that requires commitment from you; you will have to keep growing your city and gathering resources. It is the ideal game for someone who loves tower defense and city-building. Players of Clash of Clans will notice the strong resemblance in the art style.

Full of Sparks is the story of a firecracker who doesn’t want to burst and well, die. Bet you never thought about firecrackers that way when you were busy bursting them last Diwali. The puzzles include trap doors, gates and special objects that will help you get through to the other side and jump into the water. Full of Sparks provides captivating gameplay, much like in Monument Valley. There is a collection of terrified firecrackers to rescue and with the right blend of puzzle solving and timing, you’ll save them all! You can collect special objects and unlock different vision which helps you manipulate the objects in your path.

Full of Sparks will win you over with its interesting storyline, varied levels and art style. Play it for a unique adventure you wouldn’t want to miss.

Music Racer is like the revered AudioSurf, only many times better. It takes the collection of MP3 songs on your phone and converts them into levels you can race over. Basically, Music Racer uses the song you pick to generate obstacles in your path and create a race-track which flows with the rhythm of the song. The graphics are neon and retro and will completely immerse you into the game world. In fact, you could think of Music Racer as an extension to your listening experience, rather than a standalone game. You get to experience your favourite songs in a different way when you drive over them. There is a collection of levels and cars that you can unlock with in-game currency. The app is plagued by a lot of ads. They pop up quite often but strangely, this is a game where even that is worth it. There have been several renditions of an AudioSurf like game for the mobile platform, but only this one takes an old idea and puts a spin on it to make it better.