App Weekly: Read, play old arcade games along with learning about finance and investing well with our collection of apps this week

Chill with two old-school arcade games reimagined for your phone. Pick up books on a budget with BookChor and learn how to manage finances with Investmate.

Read and learn more with our collection of apps for this week. Chill with two old-school arcade games reimagined for your phone. Pick up books on a budget with BookChor and learn how to manage your finances well with Investmate. If that’s not enough, head on to Brain Baazi and pit your knowledge of trivia against others for a chance to win a cash prize! BookChor is the used books marketplace you never knew you needed. If you are supremely lucky, you might live somewhere where you can buy used books by the kilo. You can head out every weekend and forget about your budgetary constraints as you gather up books in your arms and get them weighed. The famed Daryaganj Sunday market sells books for Rs 50 per kilo!

If this excites you as a book lover who likes Kindle eBook prices but prefers paperback, check out BookChor. Buy hard copies of your favourite fiction at bargain rates. You can even choose from books at a flat rate of Rs 75 or Rs 85. There is also a ‘blind date with a book’ section that keeps the book you’re ordering a secret until you open the package. You get clues as to which genre and time it is based in. It is a great choice if you can just never figure out what to read next.

Now, you won’t find absolutely every title you want as a majority of their collection depends on used books that were widely popular. Expect plenty of James Patterson, Jeffrey Archer, Bill Bryson and Sophie Kinsella on here. There is also BookChor School, a community of like-minded readers that you can interact with. Take part in quizzes and bring glory to your house (you are sorted on the basis of the genres you like reading). Bookchor believes that everyone who reads a particular book or used books, contributes something to the understanding of the book. Image: Google Play Store

If you are in school and want to understand the esoteric world of finance or just someone who wants to invest and wants to learn the very basics, Investmate will hold your hand and guide you through lucid flashcards. Personal finance is a very important skill but limited to some because of paucity of time and lack of proper knowledge of the field. Investmate makes the information required to understand the financial system accessible in super short nuggets.

This app by Capital.com offers five courses and seems to be expanding the range of lessons. The content is extremely friendly for the absolute beginner. The app also includes a financial dictionary with simple explanations. Start with an introduction to financial markets, financial instruments and move rapidly towards Wall Street stardom as you read up on derivatives and leverage. The lessons are easy to digest and you can revise what you’ve learnt through the in-built quizzes.

You could try and search for the terms contained in this app on the web. However, you’d be hard-pressed to find a resource that breaks down something as (seemingly) hard to understand as finance into comprehensible tidbits. A great resource to continue learning about finance after you’re done with the 5 courses is Investopedia.com. Snake on a String

Snake on a String is a revival of the Snake game you have undoubtedly come across, perhaps on an ancient cell-phone. Snake on a String has you guide the snake around the board in its quest to eat something that looks like apples. Like any great revival, it builds on several aspects of the original and updates many others. The snake does not move just horizontally or vertically anymore. Because it is a slippery, slide-y snake, it slithers around in curves, following your finger across the level. The levels also include several power-ups, the most common of which is the magnet. Later levels introduce moving parts and puzzle elements.

The best part of this game is the fluidity with which the snake moves. Also, the objectives aren’t as narrow in this game. You don’t just have to keep eating and growing longer. To win in some levels, you will actually have to eat a bomb and shorten the snake (instead of killing it, which is what would happen if you fed an actual snake a bomb). There are several different worlds with their unique enemies and design.

The game looks pretty cute but is deadly in its power to become an addiction. You will sail through the levels and before you know it, be at least 15 levels in. To punish yourself, you can try out the hard and extreme levels too.

If you are running low on arcade games, Sheriffs vs Cowboys is going to be your fix. You play as a noble Sheriff combating the wayward cowboys who have overrun your town. You get off your horse and shoot your automatic aiming pistol at them.

Unlike some arcade games, this one does not make anything too easy for you. The enemies will swarm the screen and shower you with bullets. You will have to depend on your reflexes and show them who has the fastest finger. You will be hilariously under-equipped to handle the enemies at first. They seem to have an endless supply of goods with swords, bazookas and crates of toxic substance that will blow up as soon as you go near it. Upgrade your weapons with the coins you collect from the those you shoot dead. Sheriffs vs Cowboys is good old fun for the sheriff in you. 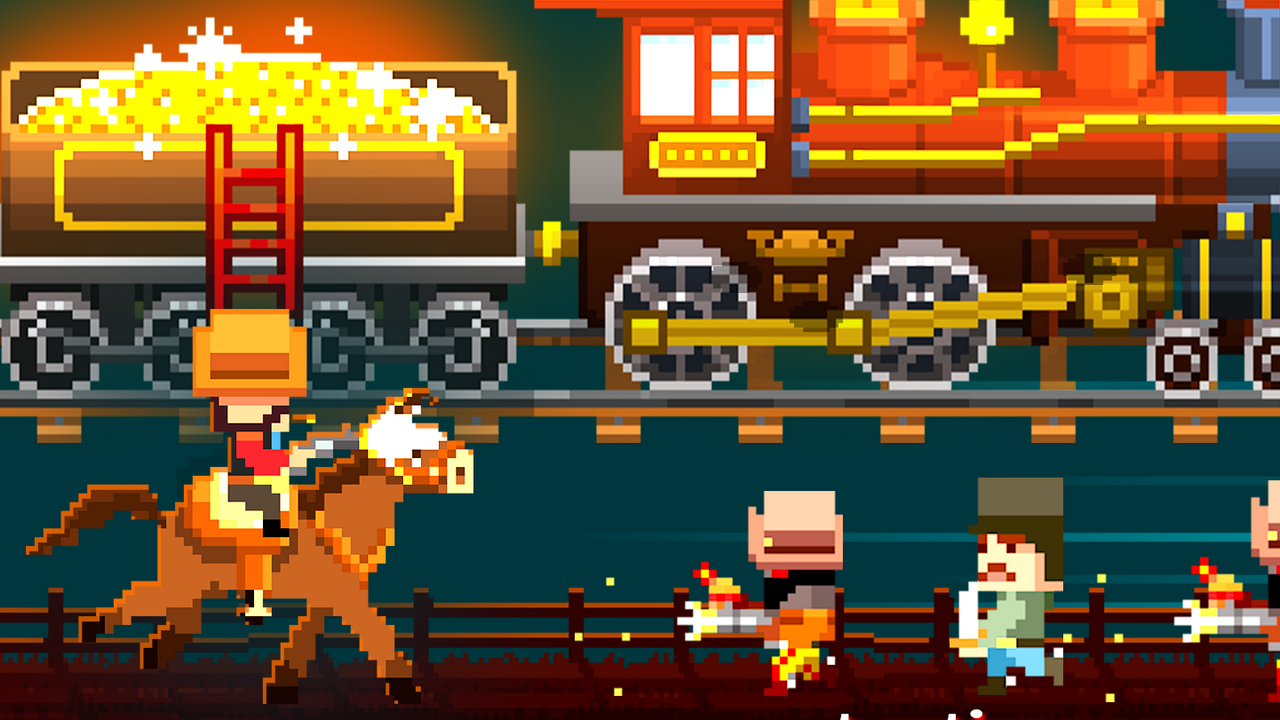 Earn that sheriff star by gunning down all the bandits in this action packed side-scroller. Image: Google Play Games

BrainBaazi is live game show conducted through this app. The questions are contextualised to an Indian audience. If you have fond memories of watching Kaun Banega Crorepati with your entire family as you saw a contestant fight through to a nail-biting finish, you will love this app.

Your phone screen may be smaller than the TV you used to watch KBC on, but the thrill is even greater because you get to play instead of just being a passive audience. The quiz happens at 1 PM every day and is hosted live. The questions are flashed on the screen at the same time for all the viewers and you can monitor how many players are left competing with you in real time. Brush up that general knowledge and play BrainBaazi for a chance to win Rs 50,000!