App Weekly: Loop, Flippy Knife and other interesting apps to keep you busy this weekend

This week, there is a bunch of weird and wonderful apps for you to check out. Read on to get our recommendations for games and other apps you should try out today.

This collection has the newest games and utility apps curated specially for you. Read on for a game where you are a rebel princess, one where you can fling knives around and an app that might help you sleep better!

Once Upon a Tower 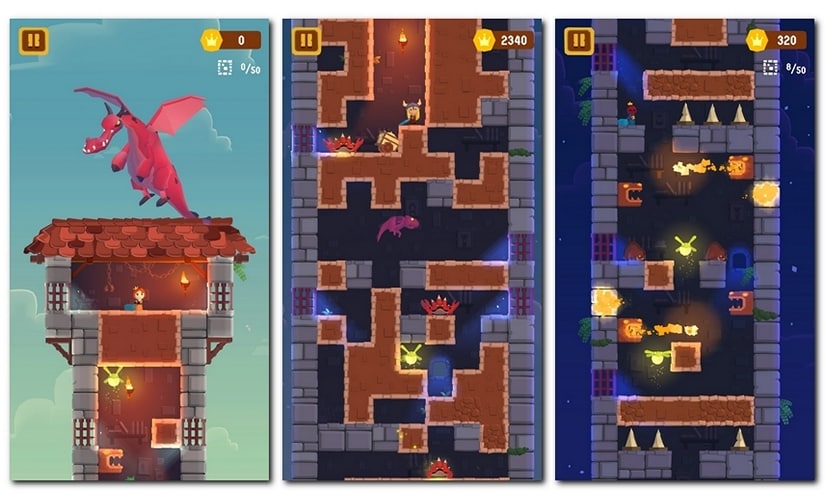 This yet unreleased game is an awesome take on the traditional damsel in distress. You can install it for free from the play store. The game starts with a handsome prince making his way up the tower to free you, a fair princess. Rather unfortunately, he gets gobbled up by the dragon guarding the tower. The silver lining is that the dragon doesn’t eat the prince’s hammer, which falls into the princess’ room. It is now up to you to drag the hammer down, destroying floors and goblins in the process. There are a number of brave princesses to unlock and each of these embarks on her own adventure from the top of the tower. The obstacles are inventive and the game does not bombard you with ads too frequently. It is easy to unlock new characters and after looking at them, you would want to. There is even one called ‘Dany’ who may or may not be based on a certain Khaleesi. Play Once Upon a Tower for a great game of the likes of ‘Daddy was a Thief’, another runner where the objective is to fall.

Loop is a runner based on drawing symbols on the screen, style of gameplay that is still uncommon. In Loop, your objective is to remove the obstacles on the screen so the ball keeps rolling. These obstacles are in the shapes of lines and doodles which you have to recreate on the screen in order to make them disappear. The game keeps it interesting by adding powerups and more complicated doodles as you progress. The art is minimalist and pretty. Play Loop for a unique way to kill time while learning how to squiggle. Always wanted to play with knives but someone in authority prevented you from doing so? Now, with Flippy Knife, you can indulge your fantasies of being heroic like in this video. The game comprises of mini-games based on different things you could do with a knife. What they really got right in this game are the physics. Each knife moves realistically with your swipes and taps. You have a lot of control and can set the angle as well as the strength of the knife’s motion. The graphics are quite similar to what you can see in Crossy Roads. If you haven’t yet played Crossy Roads, we mean that the game has a kind of blocky pixelated design (that somehow all developers decided must be present in games with ‘Crossy’, ‘Smashy’ or the like in their names). Flippy Knife is great for spending a few minutes throwing knives around, which is an activity best performed within the confines of your screen. This platform is fairly standard amongst designers, illustrators and even photographers as a means of putting your work out there. The work here is more professional and has more projects made for actual clients than a platform like DeviantArt which accommodates hobbyists and experts alike. Why should you use the Behance app? For the same reason you would look at Kickstarter, to find out the beauty and innovation creators are capable of. Since a lot of game artists also put up their work here, you can explore what happens behind the scenes of your favourite game. If you are into art and design yourself, you can use this app as a great source of inspiration. Some artists even show you the process behind their work. A lot of the design projects are created for clients and you could get an idea of how to transform your doodling skills into a source of income for yourself. You can follow designers and illustrators and keep in touch with their work.

This app helps you remember how many days are left before that important exam, birthday or anniversary. Now, you won’t really have an excuse when you are brought to task for forgetting to wish someone. The best part about the app is the sleek widget. You can place it anywhere on the screen and it shows up as a threatening or cheerful reminder depending on whether you are using it for an event you dread or one that you would potentially love. It shows up as a simple circle with a number in between with the circle reducing a bit every single day. You can have a number of widgets on your screen and you can customize their colours to match with your wallpaper. If you have trouble sleeping after staring at a screen in the evening or at night, you are not alone. Apparently, the blue light emitted by the screen signals your body to stay awake and hence you might not be able to drift off to dreamland even if you are very tired. The Night Mode app was made to solve this problem. It has different modes which regulate the hue and intensity of the light from your screen to make using devices easier on your eyes. It has the following modes; gaming, reading, aid-sleeping, and night. Welcome easier sleep and refreshed eyes with Night Mode. Another app for the same purpose is Twilight, which has an automatic setting which changes according to the time of the day, becoming darker in time for bed.