This edition of App Weekly brings a bunch of great games like 'Army Men Strike', 'Snowboarding', and 'Prizing' and more for you to try.

This App Weekly collects the best games that popped up on the Play Store in recent times. 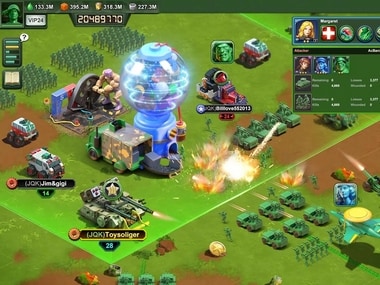 These games span a variety of genres. Experience the magic of cooking with Sara in Sara's Cooking Party or snowboard down a mountain. You could imagine your G.I. Joes alive and fighting with Army Men Strike or have a fast-paced RPG battle in DQ Heroes. Finally, if fantasy is life, delve into the wizardly world of The Magical Typewriter or become a dragon in Dragon Sim. Choose your adventure!

Sara's Cooking Party is a realistic cooking game with fantastic graphics. In this game, you start with helping Sara set up a nice dinner for her guests. The game is a complete portrayal of actual cooking than most such games because it features an entire kitchen plus the dining table (where you are also in charge of tableware). The game is ideal for teaching kids the process of making food before they are old enough to be safe in the kitchen. Each dish involves playing several mini-games in order to prepare the ingredients.

The variety of dishes will make sure you don't get bored. In fact, if you do like to cook, you may just be tempted to try out some of the recipes on your own. The food does look delicious, after all.

Prizefighters is a surprisingly good boxing game. It does not have the realism of Real Boxing but the simplified controls make it a great arcade game. You can target jabs or hooks as well as undercuts with short and long taps.

Dodging is as easy as swiping in the direction you want to go. Prizefighters has a career mode as well as an arcade mode. Set up your character with some cool pixel hair and fancy shorts. The charm of this game lies in its ability to create an engaging gaming experience out of limited controls. The earlier opponents go easy on you and almost let you beat them up. As you move up the leaderboard, you will come across more advanced fighters. Prizefighters is the ideal game to occupy your time because of how easy it is to learn and the sheer variety of opponents you could be against.

Snowboarding: The Fourth Phase is about a snowboarder who fell out of grace after an accident. You play this recovering athlete as he tries to reach the heights of his former glory. Snowboard through the most beautiful mountains you've ever seen. The detail with which the environment has been designed is visible in every tree and rock. The tracks also include plenty of ramps for you practice stunts on.  Learn about the different types of stunts possible using the four controls which allow you to grab different sides of the board. You use a separate joystick to steer the snowboard. Each level has a different objective for you to complete. The game uses different camera angles for different types of levels, giving you the optimum level of control to master stunts or achieve the speeds required. You can brighten your character up with custom suits and snowboards. This is the closest you can get to feeling the ice in your lungs as you snowboard without actually doing it. The toys in Army Men Strike faced a fate similar to those in the legends of Toy Story. However, instead of pining for their human owner, these toys decide they didn’t need a man and set about creating epic battles amongst themselves. In Army Men Strike, fight alongside the brave green plastic soldiers as they fight on historic battlegrounds such as the sofa or the bedroom. Employ sophisticated defence tactics and simply blow up some of the enemies’ base in your quest. Army Men Strike is a game that will take you back to the days where you played with G.I. Joes for hours.

Imagine the typical fantasy RPG. You start off in a small town plagued by an evil of some sort and the town elder asks you for your help in defeating it. Now imagine the entire process fast-forwarded until you're just charging through a never-ending path, vanquishing the monsters in your way. Now, you have a pretty fair idea of what Dash Quest Heroes plays like. Customize your cute pixel character and start on your journey to defeat the evil Goblin Queen. Dash Quest Heroes takes place in Dash Town, where a host of loveable (or tolerable) characters live. Duel with goblins, bees and every manner of unpleasant creature and reap the rewards of being a hero.

If you have always loved JK Rowling's imagination and the world she created with her characters, The Magical Typewriter is the perfect game for you. This is an open world game where muggles would do best to keep out. Explore mysterious castles and forbidden floors in this game which is very reminiscent of Harry Potter but where the lack of an existing storyline allows you to create your own. The controls can get a bit wonky at times and you might find yourself walking through an owl or a skimpily dressed witch. The game displays a great level of complexity for a mobile game and will totally absorb you if you let it. Cast spells, interact with the community through the guest book and witness miracles you never thought possible. All it takes is a little suspension of disbelief.

Always wanted to fly as a beast of the skies and rain terror down on every other living creature? You can do that right now with Dragon Sim! Play a fearsome dragon in this gorgeous game and hunt horses and even human beings. Feast on their flesh as you prepare to duel with other dragons. The controls take a little getting used to because there are so many of them. Some abilities are locked until you reach a particular level. Combine all the potential fun of a flight simulator with the prospect of hunting! Feel what it is like to be Smaug, Saphira, Drogon, Toothless, or any of the countless dragons from pop culture.

App Weekly: Had a tough day? This is a special list of apps that will help you wind down and relax