Thousands and possibly millions of websites hosted by GoDaddy.com went down for several hours on Monday, causing trouble for the mainly small businesses that rely on the service.

New York: Thousands and possibly millions of websites hosted by GoDaddy.com went down for several hours on Monday, causing trouble for the mainly small businesses that rely on the service.

A Twitter feed that claimed to be affiliated with the "Anonymous" hacker group said it was behind the outage, but that couldn't be confirmed. Another Twitter account, known to be associated with Anonymous, suggested the first one was just taking advantage of an outage it had nothing to do with.

GoDaddy spokeswoman Elizabeth Driscoll said the outage began at around 1:25 p.m. EDT (1725 GMT). By around 5:43 p.m. EDT (2143 GMT), the GoDaddy.com website was back up and service was restored for the bulk of its customers. Driscoll said there was no loss of sensitive customer information such as credit card data or passwords and that the company was investigating the cause.

GoDaddy.com hosts more than 5 million websites, mostly for small businesses. Websites that were complaining on Twitter about outages included MixForSale.com, which sells accessories with Japanese animation themes, and YouWatch.org, a video-sharing site. 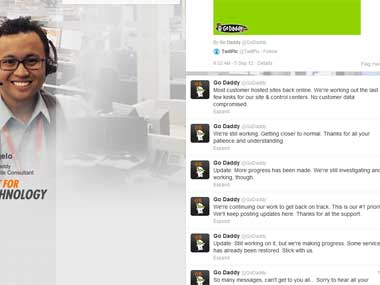 Catherine Grison, an interior designer in San Francisco who operates the site YourFrenchAccent.com, said she had to stop sending emails with her website link in them while the outage was ongoing. The site is where she displays her portfolio of work.

"If I have no visuals I have nothing left except the accent," said Grison, a native of Paris. She said she was already shopping around for another site host because she was unhappy with GoDaddy's customer service.

Earlier, Kenneth Borg, who works in a Long Beach, California, screen printing business, said fresnodogprints.com and two other sites were down. Their email addresses weren't working either.

"We run our entire business through websites and emails," Borg said.

The business even takes orders from its two physical stores through the Web, so clerks had to use their personal email addresses to send in orders to the printing shop, causing an administrative headache, Borg said.

Borg said he could empathize to some extent with the hacker, if one was involved. GoDaddy was a target for "hacktivists" early this year, when it supported a copyright bill, the Stop Online Piracy Act. Movie and music studios had backed the changes, but critics said they would result in censorship and discourage Internet innovation.

"I'm definitely one for upsetting the establishment in some cases, and I understand that if he's going after GoDaddy, he may have had many reasons for doing that," Borg said. "But I don't think he realized that he was affecting so many small businesses, and not just a major company."

How Jeff Bezos' iPhone X was hacked: 14 bytes of 4.4 MB video sent by Saudi crown prince likely to have been malware