By Sankalp Phartiyal NEW DELHI (Reuters) - Violence at a Wistron Corp factory in southern India is likely to stall the company's and its client Apple Inc's drive to expand local manufacturing, while forcing the government to redouble efforts to encourage foreign investors. Thousands of contract workers angry over the alleged non-payment of wages, destroyed equipment and vehicles at a Wistron plant in southern India on Saturday, causing an estimated $60 million in damages. 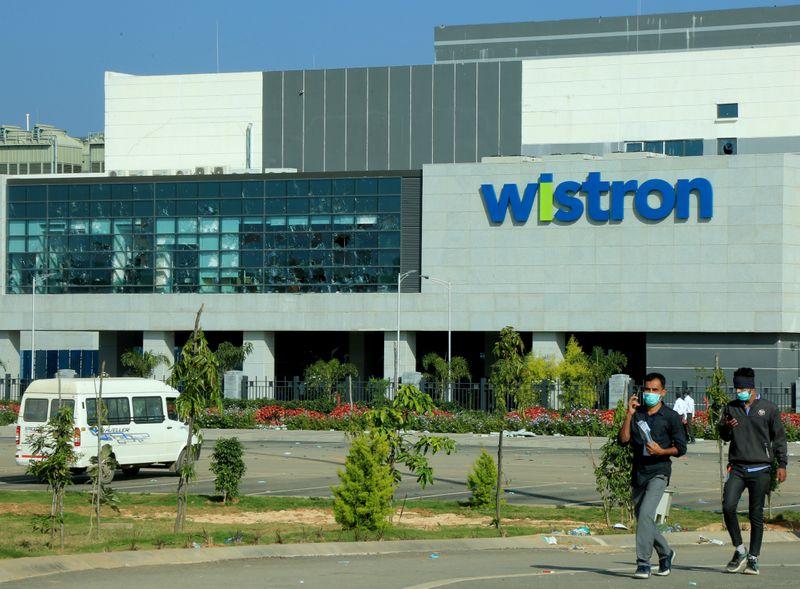 NEW DELHI (Reuters) - Violence at a Wistron Corp factory in southern India is likely to stall the company's and its client Apple Inc's drive to expand local manufacturing, while forcing the government to redouble efforts to encourage foreign investors.

Thousands of contract workers angry over the alleged non-payment of wages, destroyed equipment and vehicles at a Wistron plant in southern India on Saturday, causing an estimated $60 million in damages.

The Taiwanese company, one of Apple's top suppliers, had been hiring in significant numbers at the plant that became operational earlier this year.

It assembled the second-generation iPhone SE there and was expected to start producing newer models, but the violence has led the company to shut the site and file a police complaint against more than 5,000 contract workers for destruction of property.

Wistron has not disclosed details, but one source familiar with the situation, speaking on condition of anonymity, said the area where smartphones are assembled and lines where delicate components, such as printed circuit boards, are mounted, have been damaged.

The company did not respond to a request for comment from Reuters. It said in a regulatory filing in Taiwan that it was doing its best to get the plant running again.

Apple also did not respond to a request for comment.

Two sources close to the situation, who asked not to be named because they were not authorised to speak to the press, said restarting could be difficult.

"It disrupts business for Wistron massively," one of the sources said.

"The company was looking to hire between 15,000 to 20,000 workers over the next one year, had plans to assemble another iPhone device but the company could take several weeks, or even months to get back on its feet again."

Wistron committed earlier this year to invest roughly 13 billion rupees ($176.74 million) for smartphone manufacturing over the next five years to qualify for the government's production-linked incentive plan.

Three sources familiar with the matter said Wistron could lose most of this year's incentives if operations stay suspended, although they did not give figures.

An Apple investigation into whether Wistron flouted supplier guidelines and a labour department enquiry into the alleged non-payment of wages could add to its problems in India.

Wistron's issues are also a setback to Apple, which has in turn committed to expanding manufacturing in India and lobbied for incentives.

Apple has used India as a base to widen assembly beyond China as it adapts to a trade war between Beijing and Washington.

In India, it uses Foxconn's unit in southern Tamil Nadu state as well as Wistron's factory to make smartphones for the domestic market and for export.

Industry executives and tech analysts said Apple may seek to deepen ties with other contract manufacturers in India.

Apart from any inconvenience to the companies, the fall-out from Saturday's violence in the southern Indian hub for automobile and electronics production, is a blow to Prime Minister Narendra Modi's Make In India campaign to lure international manufacturers.

Officials are already working to limit the damage.

The technology ministry said in a statement the Wistron plant was an aberration.

Officials from New Delhi and the government of Karnataka state, where the plant is located, said they have assured Wistron of their support.

"The episode could dent India's potential as a source base for larger corporations, but the overall attractiveness of this market will stand the test," said Abheek Barua, the chief economist at top Indian private lender HDFC Bank.

"I also believe it will induce companies like Apple to take a closer look at their vendors and their policies, instead of driving them to an exodus."