Amazon Echo Spot launches in India for Rs 12,999 bringing in Alexa functionalities on a 2.5-inch display 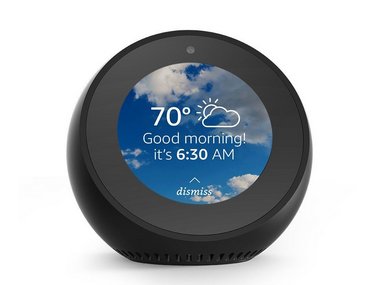 The Echo Spot is a smaller and cuddlier version of the bigger Echos but comes with a circular display that brings the features of the bigger Echo Show with it. It packs in a 2W speaker but you can connect or plug in external speakers to the device.

It comes in two colours — black and white. The design aesthetic of the Echo Spot looks like that of an alarm clock. There is a thick black-coloured bezel running around the 2.5-inch circular LCD screen (with a 480 x 480 pixel resolution) which houses a camera on the top. It weighs in at 419 gram and measures 104 x 96 x 91 mm. It comprises two microphones with far-field voice recognition technology to be able to hear your voice even from afar.

There is a dedicated button on the top to mute the microphone and the camera if you so wish. The button will then have a red afterglow and the display will have a coloured ring along the edge indicating that the Echo Spot is on mute. Unlike the Echo Plus, the Spot will need a smart hub to pair your smart electronics to accept Alexa skill commands to control them. Thanks to the camera on the Echo Spot, you can now make video calls with anyone who has an Alexa app on their phones. Amazon has added a lot of options for you to disable the camera in the way you prefer in the settings. Just like all the other Echo-powered devices, Echo Spot also supports all the Alexa skills with the added advantage of showing you on the display what it's doing. You can get your news updates with the news channels actually playing on the display, the weather updates will also be displayed on the screen, you can even check Amazon store on the display before finalising your purchase decisions and much more. It does everything that the past Echo devices did, along with a visual element added to them. Even if you don't look at the display, the experience will not be very different from a regular Echo device.

Unlike last year, when Amazon had no competition in the smart speaker space in India, this time around Google has released its smart speaker — the Google Home (Rs 9,999) and the Home Mini (Rs 4,499).

From just three options last year, to close to six now, the smart speaker market in India has suddenly become exciting and users have a wider variety of choices.