Amazon Luna will not offer individual titles in a subscription package, instead, its users will have to subscribe to different channels set up by game publishers.

Amazon has launched a new game streaming service, Luna, at its annual Alexa hardware event on Thursday. Luna will directly compete against Google’s Stadia, Sony’s PlayStation Now and Microsoft’s xCloud. Amazon says Luna will work in a similar fashion to the other existing game streaming services that let users stream and play games directly on their TV, computers, and smartphones. Early access to the service is going to be launched to a small group of people in the coming weeks. Usually, there is a monthly subscription system available but different services follow different models.

Amazon Luna will not offer individual titles in a subscription package. Instead, they would have to subscribe to different channels set up by game publishers. So here, Amazon books in different game producers, they open a dedicated channel at a set price and users choose which channel they would like to subscribe to.

Initially, there are two channels on the platform. There is a Luna+ channel which will give subscribers access to several games at $5.99 per month. They have not revealed the whole list of available titles but mentioned that Resident Evil 7, Control and Brothers: A Tale of Two Sons are some of the attractions. 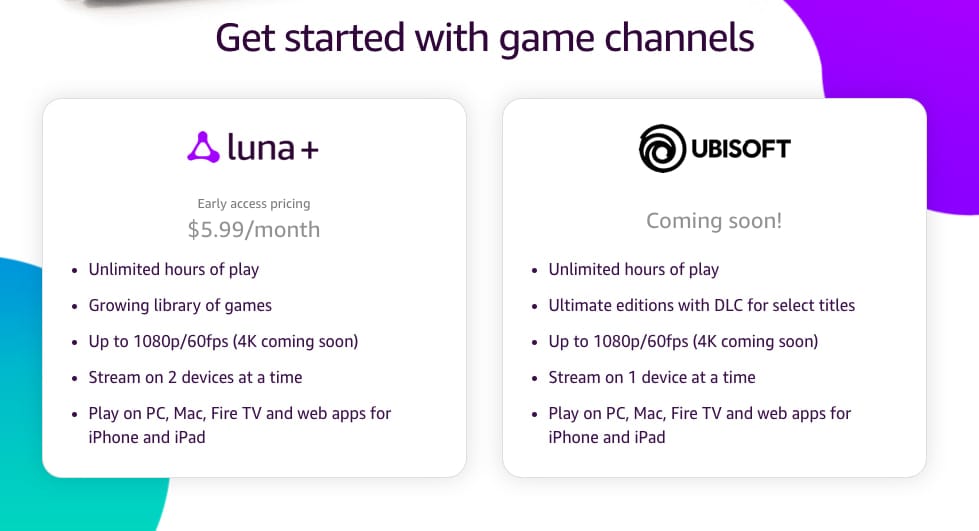 The other channel belongs to popular game developer Ubisoft. This channel will offer access to titles such as Assassins Creed: Valhalla, Far Cry 6 and Immortals Fenyx Rising. The monthly rate of subscription is yet to be announced. The business model is similar to Amazon Channels service, where users could choose to subscribe to a video provider from a wide library.

Also, to avoid Apple’s strict rules and avoid Epic Games’ fate, Luna is launching as a web app on iOS.

Amazon also announced its own Alexa-enabled Luna Controller, which will cost $49.99 during the early access period. As per the Amazon website, the Luna Controller is Alexa-enabled and connects directly to the cloud. It features a multiple-antenna design that prioritises un-interrupted Wi-Fi for lower latency gaming.

Amazon says, "our testing showed a reduction in roundtrip latency when playing Luna Controller with Cloud Direct vs. Luna Controller via Bluetooth, with reductions of between 17 to 30 milliseconds among PC, Fire TV, and Mac."

Additionally, the company says, because the Luna Controller connects directly to cloud servers, players can easily switch between screens — such as Fire TV to mobile phone — without additional pairing or configuration changes.