Alleged BlackBerry KeyONE successor surfaces on Geekbench; to come with Snapdragon 660 and 6 GB of RAM

It was revealed that the upcoming smartphone by BlackBerry houses an octa-core Qualcomm Snapdragon 660 SoC clocked at 1.8 GHz alongside 6 GB of RAM.

An alleged BlackBerry device has been spotted on the benchmarking website Geekbench. According to the listing, the model number of the upcoming device by BlackBerry is stated as QUALCOMM BBF100-1. 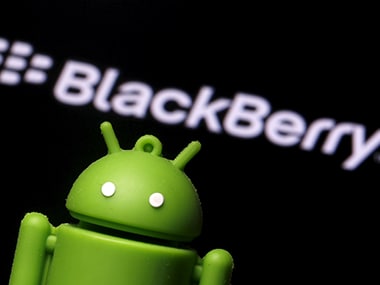 The phone scores 1532 in single core and 4185 in multi-core score. It was also revealed that the phone houses an octa-core Snapdragon 660 SoC clocked at 1.8 GHz alongside 6 GB of RAM. No expected release date or further information is available at this point. 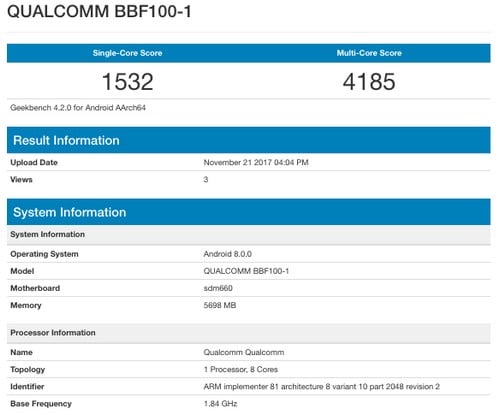 Back in August, BlackBerry launched the KEYone in India in a 'Limited Edition Black' variant at Rs 39,990. However, it was first unveiled at the Mobile World Congress earlier this year. BlackBerry had confirmed that the KEYone was a result of a "signed brand collaboration" between Optiemus and BlackBerry.

The KEYone retained BlackBerry’s iconic four-row physical keyboard along with a host of security features that the company offers. The phone packs a 4.5-inch IPS-grade LCD display at a resolution of 1620 x 1080, which gives it a 3:2 aspect ratio. The touch-enabled physical keyboard here is also backlit and comes with a fingerprint scanner built into the space bar.

BlackBerry KEYone is powered by a Qualcomm Snapdragon 625 octa-core processor clocked at 2.0 GHz and an Adreno 506 GPU. The variant launched in India comes with 4 GB of RAM and 64 GB of storage (3 GB RAM and 32 GB storage), expandable up to 2 TB via a microSD card.

BlackBerry's KeyOne upgrade to be called the Key2, will be launched on 7 June in New York

BlackBerry KEYone first impressions: After Nokia and HTC, this is BlackBerry's comeback

BlackBerry KEYone Limited Edition Black review: Great for BB fans, but others can give it a pass