All things buzzy and viral: The World Wide Web gets its own newspaper

Could you cover the world wide web just as a newspaper would cover a small town somewhere? The Daily Dot plans to do just that. But Bernice Yeung says it doesn't quite work.

The world wide web now has its own "hometown newspaper." That is what the Daily Dot, which launched this week, claims as its brief.

Since word got out earlier this year about its debut, the Daily Dot has befuddled and intrigued. How would the site go about covering the vast and virtual expanse that is the Internet? And if it's a website, then why call it a newspaper?

But the big idea, according to Daily Dot founders, is that the Internet is chock full of vibrant communities that deserve the kind of careful and detailed coverage that newspapers have historically offered.

Instead of towns or cities, the Daily Dot reports on the communities that have formed around social media platforms such as Facebook and Reddit, and the site has dedicated itself to tenaciously covering the back stories to all things buzzy and viral. 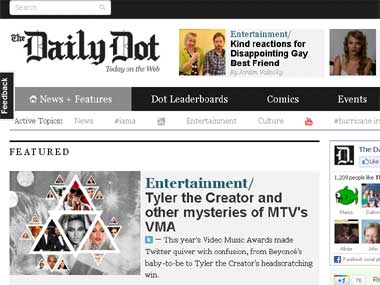 "These online worlds are as much a community as any town, and in some cases, the online version is far more vibrant," Daily Dot CEO Nicholas White told GigaOm. "We want to cover those communities the way the newspapers I grew up with covered their communities."

The problem of course is most of those newspapers are struggling. Some critics, for example, have questioned whether an antiquated and dying medium-the daily newspaper-is the best model for covering a universe as dynamic as the internet.

The internet's purported newspaper of record has received its fair share of scrutiny since its Tuesday launch. Reviewers have generally agreed that the site is "fun," but that's typically where the praise ends. The current quality and mix of content has raised some eyebrows. "On a recent day, four of the 'front page' stories were about photos or videos of cats or other animals," observed GigaOm's Mathew Ingram, who concluded that he did not feel inspired to regularly read the site.

The Daily Dot is indeed a fun read (who knew that there were so many pictures available online of owls that look drunk?), and it's a great one-stop shop for learning about the various internet memes circulating at any given moment. The Dot Leaderboard will even help you locate the most influential users on any social media platform. (FYI: Hello Cute!-where you can see pugs dressed in ice cream sundae costumes-has been crowned the most popular Tumblr log.)

On the day of the Daily Dot's public launch, editor Owen Thomas reflected on the stories the site had published during its April beta launch. "The biggest thing we learned was that our best stories are about people," Thomas, a well-regarded tech journalist who has edited Valleywag and VentureBeat, wrote in a blog post.

Indeed, the site's greatest strength is its ability to humanise online heroes and fads. Cases in point: A thoughtful profile of the gay soldier whocame out on YouTube and an insightful obituary of the online personality Angelica Rayl, widely known as Etsy Bitch.

In those moments, when the Daily Dot chronicles the colorful characters, notable debates, and the entertaining yarns that emerge from online communities, it holds its own as a unique and interesting addition to the media landscape.

Still, in its current iteration, the Daily Dot takes the newspaper metaphor too literally-and to its own detriment.

Not connecting the dots

When the Daily Dot says it will cover the internet like it would say, Smalltown, USA, it does exactly that. It fixates too earnestly on the minutiae-like spats between users on Reddit-that only those entrenched in a niche community would care about (and even then, maybe not).

Most Daily Dot stories also suffer from a lack of cultural or current events context (except for weak ones like, "If Aaliyah were alive, what would she tweet?"). Authors make no effort to connect the day's memes to any bigger picture, larger theme, or grand philosophy. So while Daily Dot stories dutifully answer the "who, why, what, where, and how" questions, they also tend to leave you wondering, "So what?"

Also the Daily Dot while it pretends to be the newspaper for the entire world wide web, is really the American wide web - a collection of reports on American memes and trends.

Despite the millions of Indians active on social networks, especially these days in the middle of the Anna Hazare fast, Daily Dot's coverage of India is limited to a software company called iYogi that spammed Reddit users. There's also a piece about an American Sikh who felt CNN had improperly used his image in relation to 9/11 terrorist coverage.

There are a few global stories thrown in here or there, like the one about two British men who were arrested after inciting a riot on Facebook, or the Chinese taxi driver who asked an American Redditer to help him look for his long-lost child. But the Daily Dot gatekeepers are clearly sitting stateside with American-made blinders on, which begs the question: Can a "newspaper" with global myopia properly cover a worldwide phenomenon?

All things buzzy and viral: The World Wide Web gets its own newspaper

Narendra Modi’s SRCC speech: Why some editors chose to skip it

Mumbai newspaper wars: the battle for the fittest