Airbus SE and Thales SA expect the number of cockpit crew on long-haul flights could be reduced to two.

Airplane manufacturers are working to adapt jets to reduce the number of pilots needed for long-haul flights and to build new cockpits designed for a single aviator in order to ease a global pilot shortage and cut airline costs. 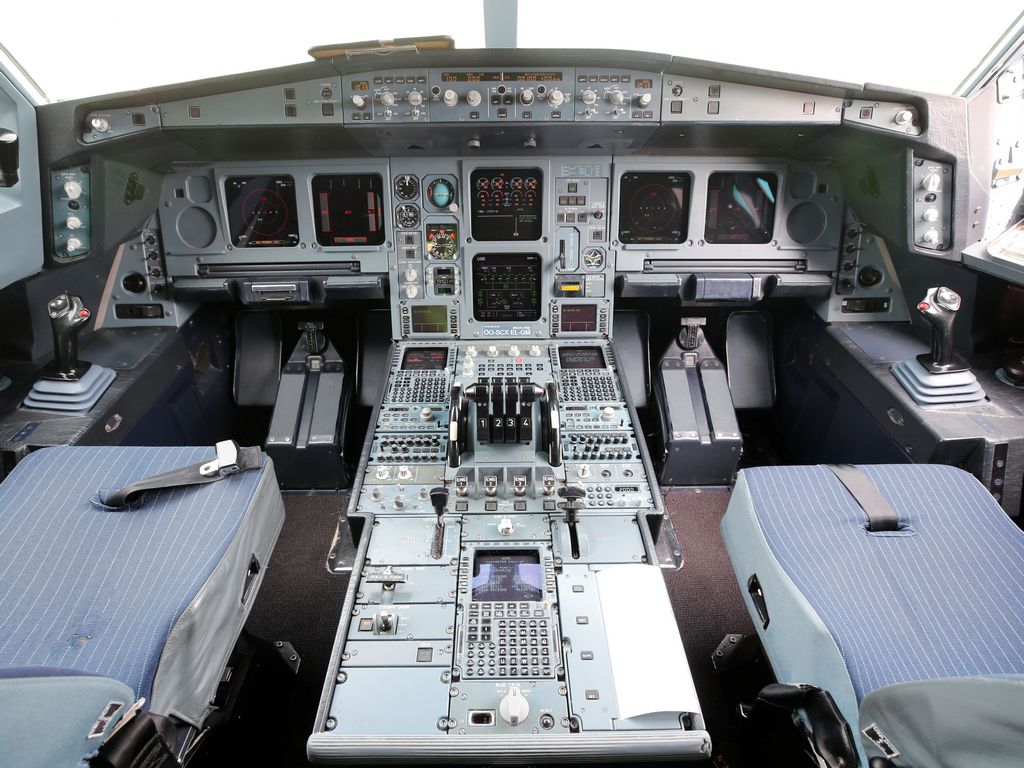 The cockpit of an Airbus A340-300 of Eurowings, a low-cost airline and fully owned subsidiary of German Lufthansa Group, is photographed as Eurowings opens a new route from Duesseldorf to New York, in Duesseldorf, Germany, April 27, 2018. REUTERS/Wolfgang Rattay - RC18FC665630

Airbus SE and Thales SA expect the number of cockpit crew on long-haul flights, typically three or four, could be reduced to two from 2023 thanks to new technology to reduce pilot workload.

“That’s not an absurd date. Reducing crew on long-range looks to be the most accessible step because there is another pilot onboard,” Jean-Brice Dumont, Airbus head of engineering, told Reuters at the Farnborough Airshow.

Boeing Co is examining the possibility of having reduced manning in the cockpit of a proposed mid-sized jet that it aims to have in service by 2025 if it proceeds with a launch decision next year, according to UBS analysts. Boeing did not immediately respond to a request for comment.

“You can see the drivers from both angles,” said Graham Braithwaite, Director of Transport Systems at Britain’s Cranfield University. “The technology to fly an aircraft on automatic is brilliant. The other driver in all this is that we’re really short of pilots. They’re a very expensive resource.”

The proponents of reduced numbers in the cockpit say the move, which could begin with cargo flights, is inevitable, just as pilot numbers were cut from three to two in the 1980s when the flight engineer position was axed due to improved design on new jets like the Boeing 757.

Airlines globally could save around $15 billion a year by going down to a single pilot, UBS said, and at a time of a pilot shortage this would help ensure there are enough aviators to serve a fast-growing industry.

Replacing the vast array of knobs and switches with more digital interfaces familiar to today’s teenagers could also help to shorten the amount of time it takes to train pilots, thus easing the shortage.

Ultimately, the goal would be for a fully autonomous commercial jet along the lines of a driverless car, although that technology, which requires clean-sheet jet designs from the major manufacturers, could take until 2040, according to an estimate from Thales.

“I would compare autonomy to an open-heart surgery of our systems. All of our systems are specified to have permanently two persons in the cockpit,” Airbus’ Dumont said.

Critics, however, say there are good safety reasons for having more than two pilots in the cockpit on long-haul flights and at least two on shorter journeys, with the costs outweighed by the benefits.

For example, reducing cockpit numbers to one in the cruise phase of a long-haul flight could increase fatigue and vulnerability in the event of an unexpected in-flight incident while the other pilot is resting, said three pilots who spoke to Reuters, pointing to the Air France 447 crash in 2009.

Even with three pilots on board, the A330 was not recovered from a high altitude stall. In that case, the two more junior aviators were at the controls and the captain, once retrieved from resting, was unable to intervene in time to save the plane.

“I have experienced the simulation of what they went through and, even being aware that it is about to happen, it is very disconcerting,” said Murray Butt, the president of the Qantas pilots union. “I can’t imagine what it would be like for two low-time pilots in the middle of the night.”

Other concerning scenarios include the deliberate crash of a Germanwings jet by one of its pilots in 2015 and the risk of a single pilot suffering from an in-flight health problem.

Moving to a single pilot would also create training difficulties, said Stuart Beveridge, an Australian commercial pilot and aviation researcher, because the first officer role is considered an apprentice step before taking on the responsibilities of a captain.

The financial benefits of reducing crew numbers could also be marginal, said aviation consultant James Halstead, because airline cost savings would likely be passed through to passengers in the form of lower ticket prices.

“On long-haul, crewing is a tiny proportion of the cost, compared to the fuel and the capital cost of the equipment,” he added. “It outweighs paying the salary of one pilot.”

The flying public also has concerns; a UBS poll found only 13 percent of respondents would take a jet with a single pilot.

Regardless of the concerns, manufacturers are pushing ahead with projects like embedding artificial intelligence into cockpits and connectivity that allows for decision-making on the ground.

In an industry where safety is paramount, reducing cockpit crew numbers won’t occur without significant testing and certification from regulators, though.

In addition, getting airlines to spend money to retrofit their current fleet as well as cultural change to manage the new kind of pilot role will be crucial, said Christine Ourmieres-Widener, CEO of British regional carrier Flybe.

“Most of the time people who are selling solutions don’t realise how complex it can be to manage change and that’s a massive change,” she said. “The technology will definitely be ready at some point but it will be a long process.”

Whether future jets will be designed for a single pilot has yet to be decided, the manufacturers said, with Airbus highlighting that new propulsion technologies also need to be considered.

“I would add that the single pilot operation is not an absolute must,” Dumont said.
“But it may be made a necessity by the fact there is a disconnect between the number of aircraft and the number of pilots.”