The Dewpoint's real novelty is in bringing a rarely-accessible technology to the consumer market, at a starting price of Rs. 49,990.

Technology today confuses me. In a sea of phones, laptops, smart bulbs, speakers of all shapes/sizes and cars that can’t yet fly, there’s a market for pretty much anything you can think of. Modern technology is as much about aesthetics, affordability and brand, as it is about any real value addition. Few products come with the kind of undeniable value that the Airowater water generator does. It makes drinking water from humidity in the surrounding air, making it a real stand-out in a sea of the gadgets and goods that we live with already.

From the outside, the 50kg water generator looks like an oversized water dispenser. It’s made to resemble those large water dispensers you see in school and college campuses or offices. Or maybe I’m just kidding myself and it actually resembles a front-load washing machine, like some friends think. I’d be lying if I said I didn’t see it, with the grill pattern on the front and that control panel in the same place you’d expect it on a washing machine.

But if you, like me, aren’t finicky about appearances or first impressions, you might choose to look beyond its tight, white and ordinary exterior. Because on the inside, this unassuming box has extraordinary, contextually-relevant bones. It’s built with two things that modern technology could desperately use right now: purpose and imagination. 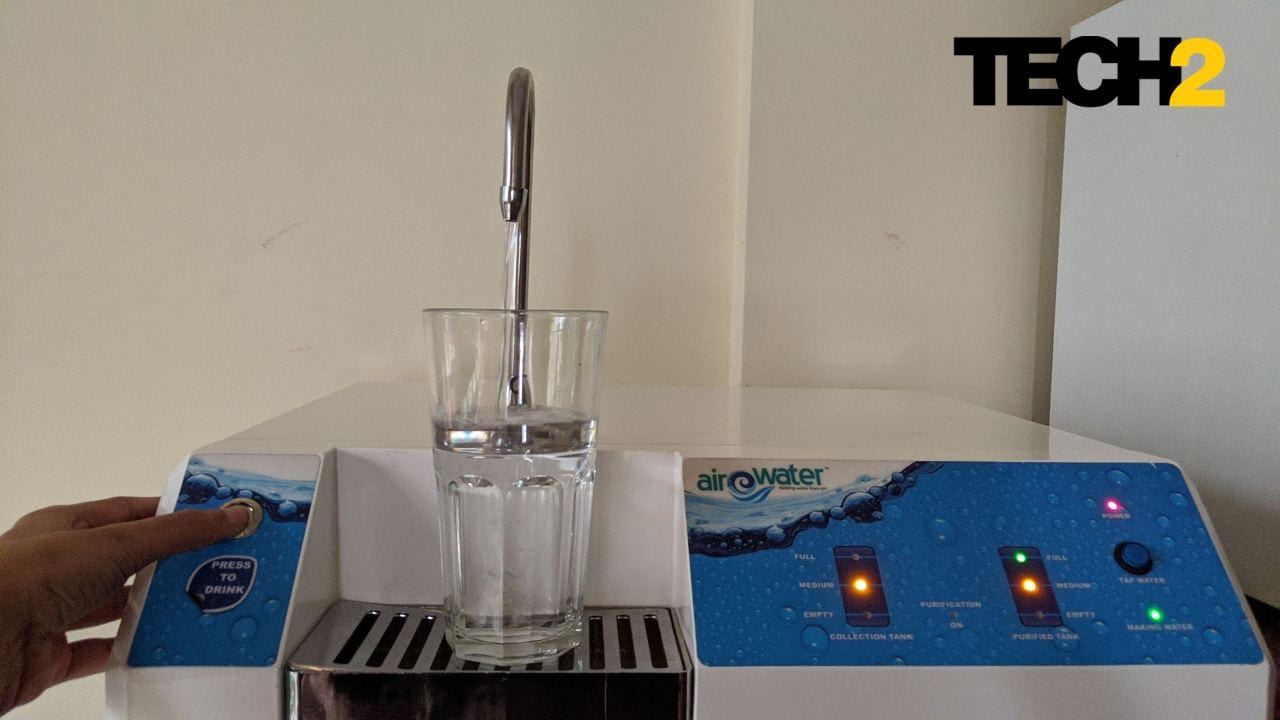 The white-and-blue Dewpoint, the smallest “portable” version of Airowater’s offerings, is a special one. It would invite conversation anywhere in the world for its design and build. And its value? That’s what you’re really paying for. The machine can effortlessly squeeze moisture from the air, pump it with minerals, and pour tasty glassfuls of drinking water at the push of a button. All this, without the fear of contamination and impurities, because it’s made from condensed water, like rain is.

Contamination is simply a non-issue here – which is a big plus for users anywhere – but especially in a country like India, where we are still addressing issues like safety, steady supply of water and electricity. Since it just needs a 230V supply and a roof over its head to work, it can also be useful in remote locations and humanitarian work, provided other logistics for heavy-lifting and transportation.

It makes water, without water

Dewpoint is a truly wonderful idea. It filters ambient air through a patented air filtering process, passing the filtered air into a condensation unit. The humidity in the airflow is evaporated to water vapour and then condensed into distilled water – a process called atmospheric condensation. Once the water is "made" this way, it is put through a 4-step filtration process, and mineralised to make it palatable and safe for consumption.

–ozonation (microorganisms including virii and bacteria).

Effectively, this removes all the usual suspects in polluted air and water. Since it comes with its own air filter, the product also claims to be a dehumidifier and air filter, both of which are technically true. Both processes reduce the risk of mould, mildew and allergens like dust mites in homes. While an added bonus, this is not a feature meaty enough to consider in any cost/benefit analysis you may want to do, to decide if a Dewpoint is for you.

A noticeable feature that’s missing in this water generator is an inlet for water. Simply put, it needs no pipes and no plumbing – just a power supply, 2x2 ft of floor space, and a reasonably humid environment – for it to do its job well. The fact that it doesn’t need any water also happens to be its most remarkable feature – redemption, of sorts, for the minor qualms you might otherwise have with the experience of using it. You’re signing up for a bit of machine hum, bulkiness, and a shiny white top surface that’s bound to become a magnet for “lived-in clutter” that flat surfaces attract over time.

The Dewpoint water generator is an easy decade away from being as user-friendly and portable as today’s air purifiers and dehumidifiers are. But it helps to remember that this appliance is no washing machine or air purifier. It’s no machine we’ve encountered browsing an electronics store, Amazon or Flipkart. It milks the air for water, which gives it a unique, surreal feeling in a sea of the otherwise-mundane appliances you’d find in every home.

If you had an “atmospheric water generator” in your home or office, you’re one of a few tens of thousand people in the world that own one. And who doesn’t like feeling like they’re one-in-a-million?

It’s a statement, and makes a good point

A social, environmentally-conscious person or small workplace could easily position the Dewpoint as a conversation starter – a small investment towards a zero-waste or water-sensitive home/office space. The smallest version of the Airowater is the size of a washing machine (25L/day), and the largest, the size of a pickup truck (1000L/day).

Having the Dewpoint device in your home will, no doubt, invite a few questions starting with, “What *is* that?”. So you might as well commit a few worldly facts to memory if you’re considering owning one.

–Groundwater around the world is drying up gradually, making drinking water harder to source

–Desalination of ocean water is still expensive, opening up possibilities for innovation in drinking water tech

–Drinking water shortages can’t be ruled out in urban areas if the water crisis gets much worse Considering that drinking water could someday soon be a scarce/costly resource, Airowater’s Dewpoint makes a louder statement today than just its utility & novelty. In homes or small workplaces, a water generator says you care enough to spend a chunk of money on "responsible consumption" of water. It is also an investment in a promising technology that is bound to go places, if given the wings (or in this case, the wheels) to. I’ll touch on what I mean about it’s potential towards the end of my review. The Dewpoint has a footprint of about 4 square foot

But there are bigger concerns as far as the drinking water supply goes.

For one, the Dewpoint device was designed to be as compact as possible for home/small office-use. Its capacity is 25 Litres of drinking water in 24 hours, at 75% relative humidity (RH). This drops to 14L/24 hours at 50% RH, and 8L/24 hours at 40% RH [See table for more details]. We’ll have to venture a guess as to how much water it can make in other less-humid conditions, like in a room with an air-conditioner that competes with it for moisture.

There’s also an option for a Tap Water inlet , which allows you to filter tap water through the system.

The sole interactive element in the Dewpoint is an LED-fitted display panel, which isn’t very intuitive. It takes using the appliance for a few cycles (of full and empty tanks) to understand the rules of the game. In the four weeks that Dewpoint has camped in my home, I learned that

–if there’s water in the "Purified" tank, it serves up drinking water on demand

But what if the purified tank indicates both "Medium" and "Full" at the same time? Unless this is a quantum water generator or Schrodinger’s Cat, I don’t get how that’s even possible. The Dewpoint does lose a few points in my book for:

–having an unpredictable water-filling rate AND no indication of time/speed of filling. This rules out the possibility of its use as the main drinking water supply for the average household.

–no child lock, considering it’s accessible to toddlers, dogs and ditzy humans like me.

–making the panel more complicated than it needs to be, considering kids and complete strangers might want a glass of water without asking the machine’s permission.

Apart from some of these design elements, the product is simple to use on a day-to-day basis, where the user only needs to check if the 'Purified' tank is "Medium" or "Full" to dispense water. The current (literal) climate will welcome the engineering and the utility of the product. The technology to distil drinking water from the atmosphere has a long future. It’s already being used on the ground, but has a future in space, too [Watch The Expanse on Primevideo].

For use in the here and now, it has much more appeal that a boring ol’ water purifier will, but doesn’t make for a very steady supply of drinking water for a family of 4, or maybe even 2, depending on where you live. It also takes up a fair bit of space for an appliance with just one function (I’m not counting the air purifier and dehumidifier functions here).

The Dewpoint water generator isn’t for the average Jai. The real novelty here is bringing a rarely-accessible technology to the consumer market, at Rs. 49,990 onwards.

For those that aren’t counting their rupees, have the floor space to spare, and have a backup in case the tank’s water cycle and yours don’t quite match up, I’d say: go for it.

For the others, innovation is bound to bring more compact, efficient and inexpensive Dewpoints to stores in the near future. Let’s you and me bide out time drinking the stuff of silly ol’ water purifiers till then.

For more images of the Airowater Dewpoint, head here.