I would like to add that more cameras do not necessarily mean better image quality.

The number of cameras at the back of smartphones are growing faster than blades in Gillette disposable razors. Irrespective of whether we think it’s necessary or not, three rear cameras will become the new normal by the end of this year, even on lower mid-range phones. If you can’t wait till then, there are already a handful of devices priced well under Rs 20,000 that flaunt three camera lenses at the back. Of course, their output cannot be compared to what you get on flagship phones but they are still more than functional, and you get the flaunt value for a fraction of the cost. So let’s see what you can get today on a budget. 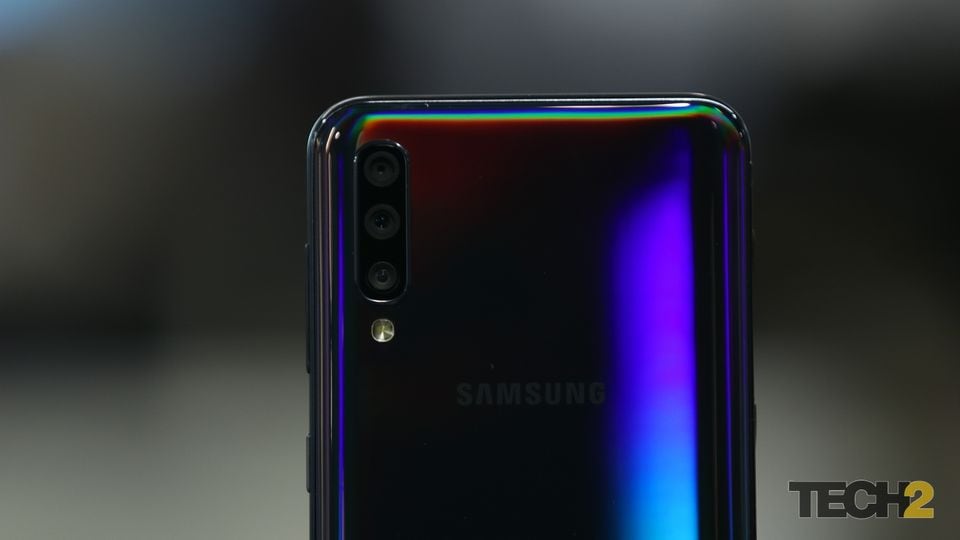 Samsung Galaxy A50 (Review) is a solid all-round mid-range phone in terms of display, design, features and performance. You get one of the best displays in this budget with a 6.4-inch Full HD+ Super AMOLED screen with a tiny drop notch, or Infinity U display as the company likes to call it. It’s not just sharp but the colour accuracy is excellent too. But more importantly, the Galaxy A50 boasts of a triple-camera setup that includes a 25 MP primary sensor, an 8 MP ultra-wide lens and a 5 MP depth sensor. The ultra-wide lens on the phone claims to offer a 123-degree field of view. The camera output is pretty good for the segment in different conditions. But bear in mind that this is an A50 and not S10, so set your expectations accordingly. The refracting back on the Samsung Galaxy A50. Image: tech2

The phone is powered by Samsung’s new mid-range Exynos 9610 SoC, which is comparable to a Snapdragon 660, and you get 4 GB RAM and 64 GB (expandable) storage. The 4,000 mAh battery easily goes beyond a day of moderate usage. You get the latest Android 9 Pie OS with Samsung’s new OneUI on top, which is a big improvement over its predecessor, Experience UI. All and all, Galaxy A50 is a solid offering from Samsung under Rs 20,000.

Huawei has been in the news for all the wrong reasons lately. We will wait and see how the ban plays out. But as of now, they haven’t been banned in India and they do have some good phones around. So no harm in reporting what’s available, right?

The Huawei P30 Lite is a massively stripped down version of its flagship handset, the Huawei P30 Pro, but it sells for a fraction of its price too. Its curved glass design is quite attractive and does feel premium. The triple camera setup here doesn’t have the Leica branded lenses found on the P30 Pro but comprises of a 24 MP primary shooter with f/1.8 aperture, 8 MP ultrawide lens and a 2 MP depth sensor. The images shot in good light are quite punchy with ample detail but the low light performance is average at best. Its 32 MP selfie camera is quite impressive though. 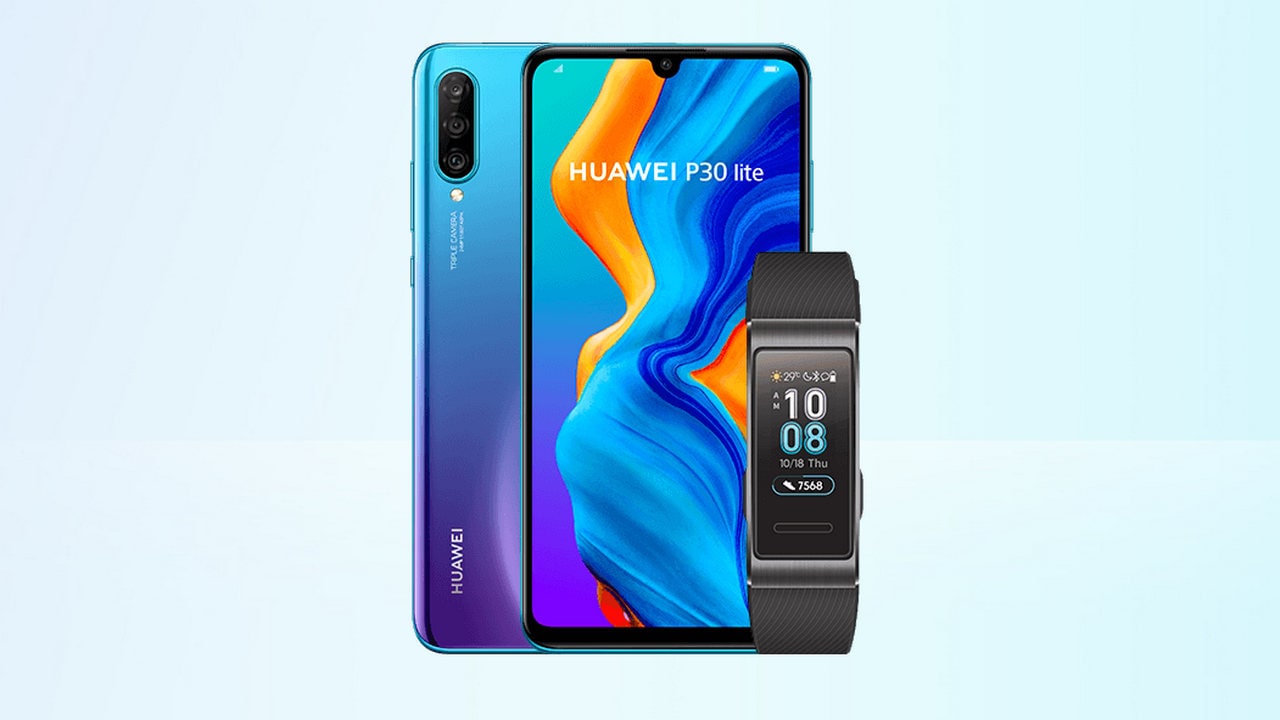 It is powered by a mid-range Kirin 710 SoC with 4 GB of RAM and a generous 128GB storage, which can be further expanded to 1 TB with a microSD card. Its 6.15- inch Full HD+ display with a drop notch is sharp and vivid and feels just the right size. The 3,340 mAh battery lasts a day of moderate usage comfortably. Huawei P30 Lite runs Android 9 Pie with EMUI 9 on top. This lesser-known Vivo phone quietly slots into the sub-20K bracket and offers a few extras over its more popular cousins. The most striking feature is its triple camera setup. You get a 13 MP primary camera with PDAF, an 8 MP ultrawide camera and a 2 MP depth sensor at the back. The overall performance is decent and you get AI support for enhancing the photography experience. The 20 MP front camera with AI face beautification will appeal to the selfie enthusiasts.

As in the case of most Vivo phones, the design is quite attractive, however, the specifications aren’t the most impressive. It is powered by a MediaTek Helio P35 SoC with 4 GB RAM and that puts it in the lower mid-range category. The 128 GB internal storage is a good number in this budget. You don’t get a Full HD display either which is a questionable decision on the company’s part. But the HD+ screen (1,544 x 720 pixels) coupled with a 5,000 mAh battery gives you a battery backup close to two days. It also supports fast charging. The Vivo Y17 runs Android 9 Pie with FunTouch UI on top.

The Samsung Galaxy M30 is similar to the Galaxy A50 in many ways. This too has an excellent 6.4-inch Super AMOLED Full HD+ display with a drop notch, a rarity in the sub-15K budget. And of course, you have triple cameras at the back with 13 MP + 5 MP (ultra-wide) + 5 MP sensors manning the photography department. The photos come out sharp in good lighting conditions and the low light performance is acceptable for this budget. The portrait shots are quite impressive too and so are the selfies clicked with its 16MP front shooter. The Galaxy M30 is one of the first budget phones to feature a triple rear camera setup.

The Samsung Galaxy M30 is powered by a lower mid-range Exynos 7904 SoC which is comparable to a Qualcomm Snapdragon 636 or a MediaTek P60. It is accompanied by 4 GB RAM and 64 GB of internal storage that can be expanded further using a microSD card. Its 5,000 mAh battery is another big plus as it can last for two days on moderate usage. Lastly, like all M series phones currently, it runs Android Oreo 8.1 OS with Experience UI layer on top. It is expected to get Android 9 Pie next month.

Yes, you read that right — triple camera phone under Rs 10,000! The brand new Infinix S4 understandably has modest specifications like MediaTek Helio P22 SoC (found in Xiaomi’s Redmi 6), 3  GB RAM and 32 GB internal storage. But it still manages to have three cameras at the back. Just like the Vivo Y17, it has a combination of 13 MP primary sensor, 8 MP ultrawide and 2 MP depth sensor. If that wasn’t enough, you also get a 32 MP AI assisted selfie camera. You get a 6.21-inch HD+ display with drop notch which is perfectly fine for this budget segment. A 4,000 mAh battery rounds off an impressive package under 9K. The phone runs Android 9 Pie with XOS 5.0 Cheetah UI on top. The phone will be up for grabs on Flipkart starting 28th May.

Before I sign off, I would like to add that more cameras do not necessarily mean better image quality. There are lots of good phones with dual cameras like Redmi Note 7 Pro (Review), Realme 3 Pro (Review) etc. that outperform these triple camera phones hands down. So keep that in mind before making a buying decision.

Samsung Galaxy M30 to launch in India on 27 February: All you need to know