Activision finally releases Call of Duty: WWII for the Xbox One, PlayStation 4 and PC

Call of Duty: WWII has been priced at Rs 3,999 for the PlayStation 4, while Xbox One players can buy it for Rs 4,497 based on the listing on Amazon.

Sledgehammer Games has finally launched Call of Duty: WWII, the trailer for which was first revealed back in April 2017. The game is available for the PlayStation 4, Xbox One as well as for PC gamers. 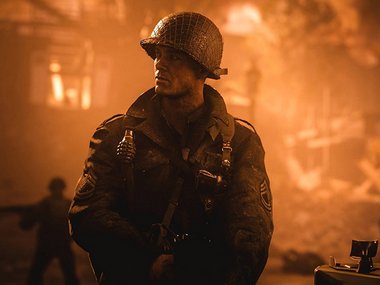 Call of Duty: WWII has been priced at Rs 3,999 for the PlayStation 4, while Xbox One users can buy it for Rs 4,497 based on the listing on Amazon. PC gamer will have to shell out a little lesser in comparison at Rs 3,799 to get a copy of the game.

Call of Duty franchise started back in 2003 and continues to be among the most popular video game titles of Activision, the publisher of the game. The first person shooter title began with the Second World War and has made its way back to the historic event after 17 years. During this period the storyline shifted to the war in Vietnam and even to the future in 2015 with the release of Black Ops.

The new Call of Duty brings in the option of selecting 'Divisions' an addition to the game which involves choosing a team with unique abilities and weapons. These divisions include Airborne, Mountain, Infantry, Armoured and Expeditionary Forces. These are meant to suit the style of the shooter, bringing more flexibility and angles of play.

There is also an in-game social hub this time around called the 'Headquarters'. This is the first time that such a capability has been included in the franchise allowing gamers to compete, earn rewards and showcase their achievements.

Call of Duty Mobile Challenge 2020: Registration dates, prize pool, and everything else you need to know