Google will be aiming for the K-12 market and will have the tablet run the same Chrome OS which is found on Google's other 2-in-1 laptops.

In response to the reportedly growing use of Chromebooks in schools, Google has announced the Acer Chromebook Tab 10 which is Chrome OS-powered tablet. The tablet will be launching in North America this April at a price of $329 and in the European market this May at a price of €329. It can be noted that this almost the same price as that of the Apple's entry-level iPad. 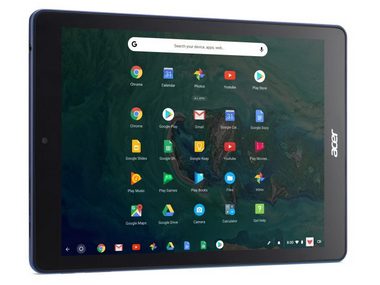 Google will be aiming for the schoolgoing student market and will have the tablet run the same Chrome OS which is found on Google's other 2-in-1 laptops.

As per the 9to5Google report, Acer Chromebook Tab 10 will come with all of Google's existing Chromebook education features along with Play Store and Android apps. In terms of its design, the Chromebook Tab comes with a 9.7-inch LED-backlit display with a resolution of 2048 x 1536 pixels. The Chromebook also includes a Wacom EMR stylus which does not need a battery.

The Chromebook has 2×2 MIMO 802.11ac Wi-Fi, Bluetooth 4.1, 3.5mm headphone jack and USB Type-C port as connectivity options. The tablet also has dual speakers and the battery can provide up to 9 hours per charge as per the report.