45,000 classrooms in Kerela are set to become hi-tech by March-end next year

By March-end next year 60,250 laptops and 43,750 multimedia projectors would be ready for disbursement in Kerela schools.

Forty five thousand classrooms in around 4,775 schools across Kerala are set to turn hi-tech by March-end next year as 60,250 laptops and 43,750 multimedia projectors are ready for disbursement, said an official. 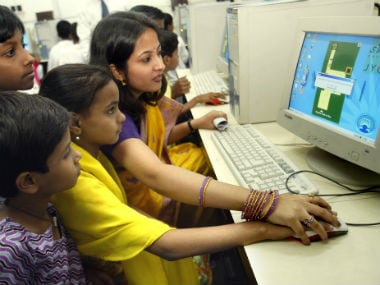 K. Anvar Sadath, Vice Chairman, Kerala Infrastructure and Technology for Education (KITE), told IANS that the purchase orders for 60,250 laptops and 43,750 multimedia projectors has been released to the successful bidders on Thursday.

"These will be distributed in three phases with the first one in January, the second one in February, and by March, each and every of the 45,000 classrooms will turn into a hi-tech one," said Sadath.

He said the estimated cost of this project was Rs 493.50 crore. However, the final price received for the same after the tender is Rs 228.04 crore excluding taxes. The laptops would be pre-loaded with Free and Open Source Software (FOSS) operating system in lieu of proprietary software, where the latter would have cost Rs 1.50 lakh in each machine as an additional expense.

Through this initiative the state exchequer would effectively save up to Rs 900 crore. "For the first time in the country, these laptops and projectors will have a 5 year comprehensive warranty. The schools would not be having any liability towards the maintenance of these machines," said Sadath.

"KITE would set-up the call centre and web portal for addressing the issues reported from schools. If any issue reported from schools remained unresolved within the stipulated time, a penalty of Rs 100 per day would be levied on the respective companies," added Sadath.

Companies Must Adopt And Enforce An OSS Policy: Gartner