2018 Maruti Suzuki Swift first drive review: This third generation design is sure to be a winner

The new Swift looks smarter and retains the shape and proportions of the original, which made it such a loved hatchback.

On 18 January, bookings for the new Maruti Suzuki Swift opened for a sum of Rs 11,000, it will be launched in India at the Auto Expo in February. This is the 3rd generation Swift, and holds out the promise of building on the success of its predecessors and satisfying lakhs of more customers.

The first generation Swift was introduced in India in 2005 and was an instant success. The modern and fashionable Maruti Suzuki Swift also won the inaugural ICOTY (Indian Car of the Year) award in 2006 and the second generation version that was introduced in our country in 2010, was also the ICOTY 2012. The car features an all new design. Image: Maruti Suzuki

Right from its launch, the Swift has featured among the top five best selling cars in India. The new Maruti Suzuki Swift is built on the 5th generation Heartect platform which is also the base for the likes of Baleno, Ignis and Swift Dzire. This platform is not only lighter, but also stronger and more rigid thanks to the significant usage of high tensile steel. While it reduces weight and helps enhance performance, it also aids the driving dynamics.

The new Swift looks smarter and retains the shape and proportions of the original, which made it such a loved hatchback. The biggest difference is the large, hexagonal grille that one has already seen on the new Swift Dzire. This grille, along with the longer and more sharply shaped headlights, dominates the entire design. The projector headlamps on the top end versions also come with eye-catching LED daytime running lights (DRL's).

The designers have kept the earlier Swift's blacked-out pillars that gave it a floating roof look. The difference now is that there is a black plastic trim panel placed on the rear door that extends across the C-pillar and all the way to the rear windscreen. This panel also houses the rear door handle, which is positioned vertically and in such a manner that it is not so visible. While this is an appreciable styling touch, on our drive, I noticed dust collecting inside the handle.

At the rear, the new Swift's LED taillights are different and somewhat similiar-looking to what you find on its sibling, the Baleno. The tailgate is also wider and unlike in the earlier bumper where the license plate was on top, it's now placed on the bottom of the new bumper.

The length of the new Maruti Suzuki Swift is 3,840 mm, width 1,735 mm, height 1,530 mm and wheelbase 2,450 mm.  This makes it 10 mm shorter but 40 mm wider than its predecessor. The height of both is the same, but the wheelbase of the new Swift is 20 mm more and this results in additional cabin space. The capacity of the boot has also increased by 58 litres. The new Swift is also significantly lighter with the petrol version, being 85 kg and the diesel 75 kg less.

The weight loss has significantly helped the Maruti Suzuki Swift improve its fuel efficiency, and as per the ARAI test cycle, the petrol version now delivers 22 kpl (improvement of 7 percent) and the diesel 28.4 kpl (12 percent better).

The Maruti Suzuki Swift has a new interior too, and while it may not be as funky as the Ignis, it is driver focused with a very sensible design and user-friendly controls and instruments. The best part has to be the smartly shaped and nicely bolstered seats that hold you in a welcoming manner and offer a high level of seating comfort. The sporty and chunky, flat-bottomed three-spoke steering wheel feels nice too. The simple instrument cluster is dominated by a large, round tachometer and speedometer. Both are extremely easy to read and emphasize the focus on driving fun and performance. 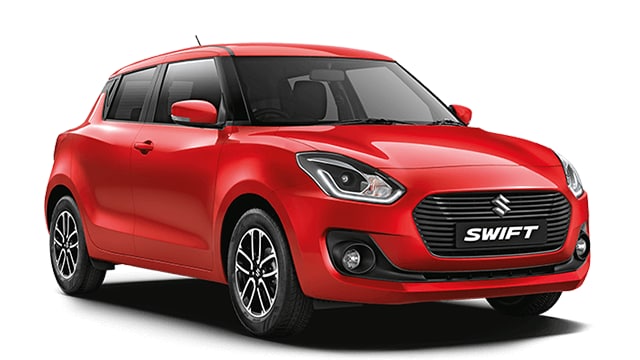 The new car is wider than its predecessor

Though the new Swift continues with the cockpit-style glass house, the view from the rear windows is better and one also feels less claustrophobic. The nozzles of windscreen washer have three sprays each that cover the windscreen with a lot of washer fluid and this helps clean the windscreen in a far better manner.

While the all-black interior is in keeping with the Swift's sporty image, some of the plastics do feel a little hard and cheap. However the new Swift comes packed with a long list of features like dual airbags, ABS with EBD and brake assist, climate control, keyless entry with push-button start-stop, etc. It also has an integrated SmartPlay infotainment system that supports Apple CarPlay, Google's Android Auto and Mirror Link. This system also has inbuilt navigation with Aux-in, USB and Bluetooth connectivity and a rear parking camera with sensors and alerts.

The new Swift continues to be powered by the familiar and proven 1.2-litre, 4-cylinder petrol and 1.3-litre, 4-cylinder diesel engines.  The petrol delivers 81 bhp and 113 Nm of torque and the diesel 74 bhp and 190 Nm, which is the same as before. What is new is that the top-end versions of both now come mated with a 5-speed Auto Gear Shift (AGS) transmission.  On our drive of the new Suzuki Swift from Pune to Lonavala, we felt the AGS has been further fine-tuned from those we have seen in other Marutis. The AGS now is more responsive and eager to shift and appears to have been set up to give a sense of sportier performance in the Swift.

On the road, the new Maruti Suzuki Swift feels eager and responsive with the sweet petrol engine continuing to be a happy revving unit that is not too vocal, even near the limits of its rev range. The diesel motor also feels more refined and silent and the power delivery is more linear too, with some of the turbo lag having been reined in.

The new platform and proper tuning of the suspension has ensured that the ride is more comfortable and complaint now. Fortunately this is not at the cost of handling and the Swift continues to be agile and light on its feet. It turns in smartly and provides appreciable levels of grip. While there is some body roll it is well controlled. The steering, while not as direct as before, still connects the driver quite well with the wheels, and involves him nicely with the driving experience.

While the AGS transmission is certainly the better option for our crowded city conditions, enthusiasts will prefer the 5-speed manual. Its shifter is light and precise but on long drives on the highway, you do feel the need for a 6th gear. The brakes are up to the job and offer fairly good feel.

This third generation version of the Maruti Suzuki Swift is surely set to be a big success and from what we understand, it will be priced marginally higher than the outgoing one. Maruti will also surely launch the new Swift in a big way at the Auto Expo in February, and this should have customers rushing to their showrooms.