The UIDAI on 3rd April published a list of Frequently Asked Questions in national dailies, in an effort to address concerns with Aadhaar.

The UIDAI on 3 April published a list of Frequently Asked Questions in national dailies, in an effort to address concerns with Aadhaar. The issue that arises with some of the statements made in these FAQs are not so much that they are incorrect, but that they present an extremely narrow perspective of Aadhaar, and only portray Aadhaar as it is intended to be on paper, as opposed to the actual situation.

Here, some of the statements of the UIDAI in these FAQs are looked at. 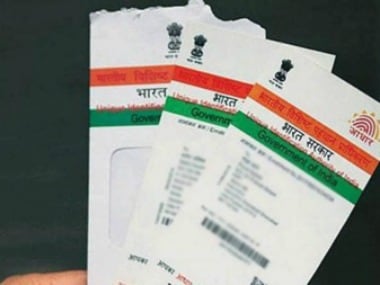 The UIDAI lists the following data as that collected and stored in its database, namely the CIDR — name, address, gender, date of birth, ten fingerprints, two iris scans, photographs, mobile number and e-mail. While this is the list of data specified in the Aadhaar Act to be collected, i.e., biometric and demographic information, the list excludes metadata, the collection of which is authorised by the Aadhaar regulations themselves (Regulation 26 of the Aadhaar (Authentication) Regulations).

Aadhaar is not a profiling tool

This does not, however, take into account related databases like the State Resident Data Hubs (SRDH), which are said to be repositories of UIDAI data. Security researchers have reported SRDHs to provide 360-degree profile of individuals — including all UIDAI data, data like driving license numbers, passport numbers, updates on location based on transactions, family and household information, and so on. A statement that Aadhaar is not a profiling tool needs to take into account such Aadhaar-enabled profiling.

A man goes through the process of eye scanning for the Unique Identification (UID) database system, also known as Aadhaar, at a registration centre. Image: Reuters

The UIDAI further states that Section 32(3) of the Aadhaar Act 2016 specifically prohibits UIDAI from controlling, collecting, keeping or maintaining any information about the purpose of authentication either by itself or through any entity. While this section is true, it still does not take into account how entities like SRDHs were established under the law.

Aadhaar data has never been breached

Secondly, the dangers to Aadhaar data do not arise from a breach of the CIDR only. There are multiple sources of Aadhaar data — be it data with governmental websites, private entities collecting Aadhaar data, or various apps using Aadhaar. The UIDAI, in fact, admitted in yesterday’s hearings that AuAs, KuAs and ASAs are required to log data which includes Aadhaar numbers and other authentication information. The data at all these levels is very much at risk.

For instance, the UIDAI itself admitted to disclosure of Aadhaar data by 200 government websites, and security researchers recently reported flaws in the mAadhaar app which risked the linked databases and user data.

Reports of Aadhaar breaches are misreporting

Further, the UIDAI dismissed many of the news stories on Aadhaar data breaches as misreporting. Given that the UIDAI usually issues statements immediately, dismissing such media reports, it is unlikely that the news reports were first investigated and verified. Even in the Tribune case, the UIDAI had first dismissed the story as misreporting and denied the breach and then went on to file an FIR against the reporters, in the name of investigating the matter.

Moreover, researchers have reported that despite attempts to approach the UIDAI or other authorities to inform them of a vulnerability or breach, no action was taken against it till the report was published in the media (such as the Indane leak).

This is the statement issued by the UIDAI on the advantages of linking Aadhaar to bank accounts — that this will enable fraudsters to be located and punished. It is unclear how exactly this is possible. Several bank accounts have been hacked and emptied through various means, such as this report of several Aadhaar based frauds in public sector banks, or this UPI and Aadhaar based scam conducted on the pretext of Aadhaar-PAN linkage. Many of the fraudsters have not been caught.

Bank accounts are more secure because of Aadhaar linking

This statement is untrue, given that the Aadhaar linking of bank accounts has provided fraudsters with an extremely simple method of hacking into accounts. A simple method revealed by the scams reported is of fraudulently obtaining duplicate sim cards or changing Aadhaar registered mobile numbers, downloading a UPI based app, and simply withdrawing all the money from the linked bank accounts. 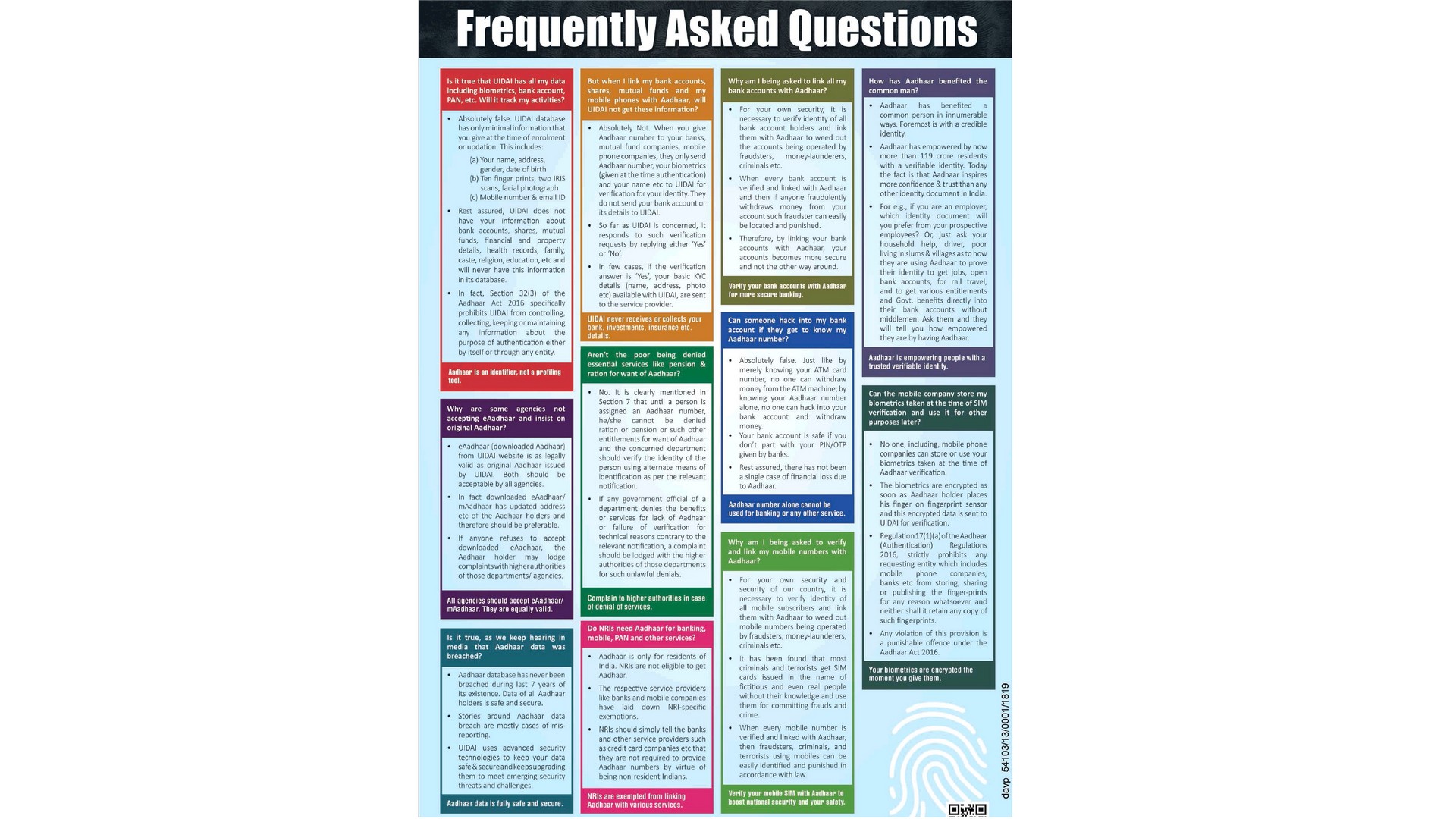 Aadhaar FAQ advert published in national dailies by the UIDAI

No one can hack into bank accounts with Aadhaar number alone

This statement is true, but only to the extent that hacking into a system with an Aadhaar number ALONE, is not possible. This statement does not take into account the risk the Aadhaar number poses in combination with other information so easily available or obtainable.

The example given above, for instance, clearly indicates how the Aadhaar number, in combination with other data, can easily be used to hack into accounts. Moreover, data like passwords, PINs, etc., are easily available with cybercriminals from data dumps on the dark web. These data dumps are also including biometric information, given its increasing significance.

No one is being denied services due to Aadhaar

Even looking at the law itself, Section 7 provides only two options — to get benefits, a person must either have Aadhaar or have applied for Aadhaar. It doesn’t take into account persons who have chosen not to acquire Aadhaar, a right which they have till the Supreme Court passes its final verdict. For instance, in the Aadhaar hearing, one petitioner reported denial of admission to the school for his son because he and his family chose not to enroll in Aadhaar. The Aadhaar enrolment forms themselves, after all, cite that Aadhaar enrolment is ‘voluntary’. In such a case, alternative arrangements need to be made for people choosing not to have Aadhaar.

No one can store or use biometrics

There have been reports proving this statement to be untrue, such as the biometric replay attacks, and the report of shopkeepers swindling rations after reporting authentication failures to the people. There is, additionally, the problem of fraudsters using duplicate software, skimmers and other technical methods to collect biometric data. This is another questionable statement by the UIDAI, which goes on to describe Aadhaar is the most preferred identity document in India. The true statement is probably that, by virtue of Aadhaar being made mandatory under various notifications under Section 7 and Section 57 of the Aadhaar Act, Aadhaar is (or will soon be) the only accepted identity document in India.

It has been pointed out several times that unlike with Aadhaar, for other identity documents such as a passport, there are actual physical verifications that take place, such as of a police visit to verify residence. However, none of these verifications is conducted with Aadhaar. In fact, the petitioners in Tuesday’s Aadhaar hearing questioned whether any verification was done to verify the 182 days residence requirement, or to verify whether a person was an illegal immigrant or no. The UIDAI’s only response to this was that those enrolling signed a declaration that they were so resident. This indicates that no further verification was done.

In the absence of suitable verification, and coupled with the issues of biometric authentication such as probabilistic and inaccurate matching, it is, therefore, unlikely that it is as trustworthy a document as the UIDAI claims. Further, there are also reports of fake and duplicate Aadhaar cards being issued.

Lastly, the FAQs offer filing complaints with higher authorities as a solution to Aadhaar-based problems. In the ongoing Aadhaar hearings, the UIDAI cited the lack of complaints filed with it as a factor in its favour. Given the huge masses of people don’t even have a proper understanding of the digital world, they are unlikely to have the knowledge or the means to approach authorities to complain or resolve their issues. 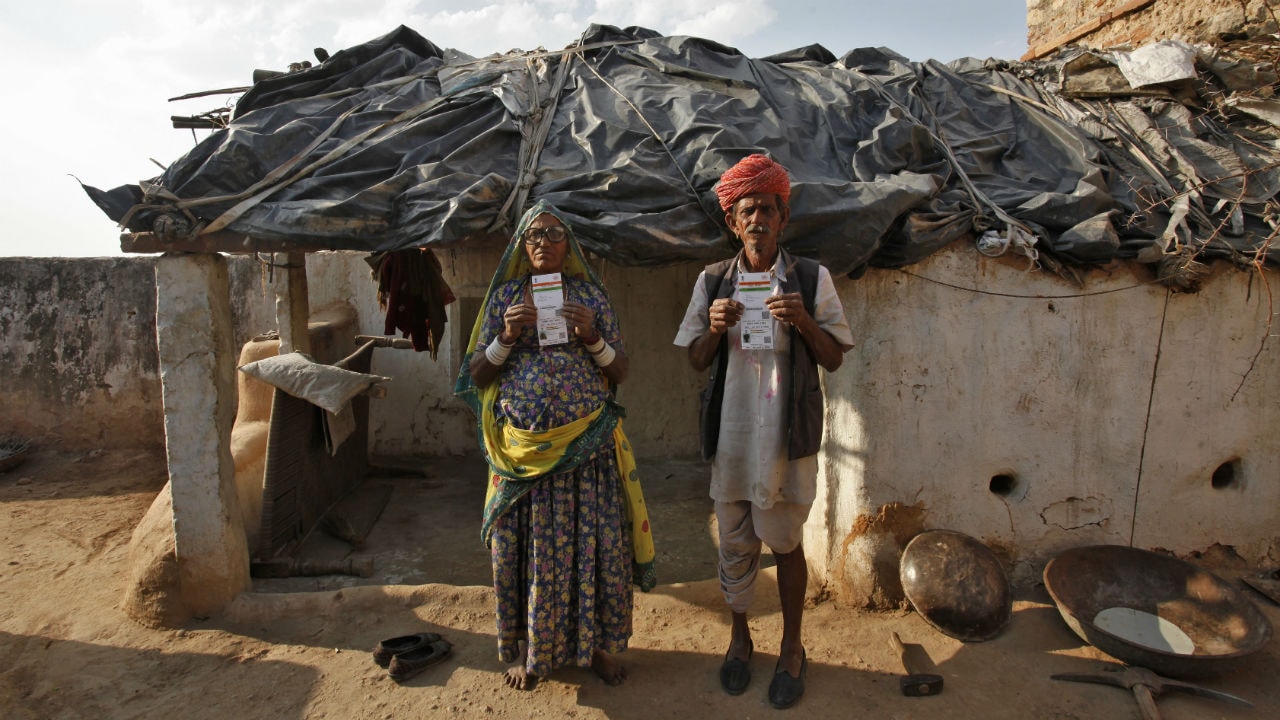 Quoting rules does not alleviate concerns

Such denial of issues with Aadhaar and quoting rules does little to alleviate people’s concerns with Aadhaar. The UIDAI would go much further with inspiring confidence in Aadhaar and its security, by showing an active and ongoing interest in discovering and resolving the issues with the Aadhar ecosystem. Vulnerabilities and risks in a large scale digital system like Aadhaar are inevitable. Instead of working with such issues, to turn a blind eye to them, will not ensure better security.

(Note - The content of the FAQs is the same as that published earlier in January).

Here are the daily reports from the Aadhaar Supreme Court hearing