On 16 March, Prime Minister Narendra Modi inaugurated the 105th Indian Science Congress which will take place till 20 March 2018 at Imphal in Manipur. 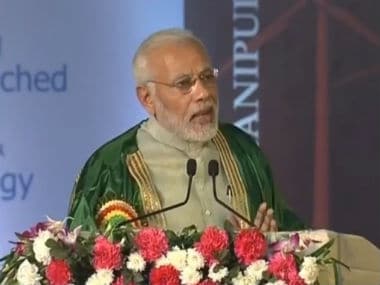 Themed “Reaching the Unreached Through Science and Technology”, the conference will see social sciences and science coming together.

In his inaugural speech, Modi spoke about "scientific social responsibility" through science and technology. He urged an R&D-based approach to solve problems at institutional, corporate or school level.

Organised by the Manipur University, 5,000 delegates from all over the country and 2,000 scientists along with four Nobel Laureates will grace the event.Modi urged people to encourage scientific temper in the youth where every scientist must dedicate “100 hours every year with 100 students”.

Reiterating that India needs to be future-ready, he said that technology will play a vital role in the services such as healthcare, education, and banking. Machine learning, artificial intelligence, e-mobility, 5G telecommunication, data analytics will aid in creating a smart city and industries, said Modi.

Speaking of 5G, he said that the government intends to bring 5G penetration by 2020.

The prime minister encouraged the Indian scientists to work towards affordable healthcare and diseases such as sickle cell anaemia, malaria, Japanese Encephalitis etc.

He urged scientists to work towards achieving their goal of increase in non-fossil fuel capacity share in the electricity mix by 40 percent in 2030 and installation of 100 GW of solar power modules by 2022. He further added, “Our government has already given the go-ahead to establish the third LIGO detector in the country. It will expand our knowledge in basic sciences in the areas of lasers, light waves and computing. I am told that our scientists are working tirelessly to make it a reality.”

In a boost to research in science and technology, Modi also said that the Prime Minister’s Research Fellows’ scheme has been approved.

We have approved a 'Prime Minister’s Research Fellows' scheme. Under this, bright minds from the best Institutions in the country, like IISc,IIT,NIT, IISER & IIIT will be offered direct admission in Ph.D in IIT & IISc. This will help address brain-drain from our country: PM

Students selected from IISc, IIT, NIT, IISER and IIIT will be offered direct admission in PhD in IIT and IISc.

Modi was welcomed by Manipur Governor Najma Heptulla and chief minister N Biren Singh in Imphal. He will also lay the foundation stone for Luwangpokpa Multi-Sports Complex in Luwangsangbam, Rani Gaidinliu Park, and other development projects such as Anganwadi Centres, residential complexes for teachers, doctors and nurses, etc.