India tops the list of countries whose users flagged the most videos on YouTube during the final quarter (October to December) of 2017 for inappropriate content, a transparency report released by Google revealed.

Both flagging mechanisms (automated and human) led to the removal of over 8.28 million videos in the fourth quarter. 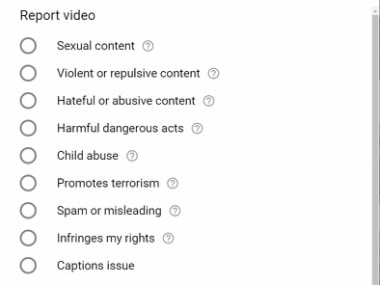 "We rely on teams from around the world to review flagged videos and remove content that violates our terms, restrict videos (for instance, age-restrict content that may not be appropriate for all audiences), or leave the content live when it doesn’t violate our guidelines," the report said.

Of the 82,84,039 videos removed, 6.6 million were pulled down on the basis of automated flagging, the report said.

When flagging a video, human flaggers can select from a list of reasons for reporting the video and leave comments or video timestamps for YouTube's reviewers.

Following are the reasons videos have been reported for by human users:

While the Google-owned company did not disclose details about the number of users from each country flagging content like pornography, incitement to violence, harassment, or hate speech, it ranked India at the top in terms of total volume.

"Flagging a video does not necessarily result in it being removed. Human flagged videos are removed for violations of Community Guidelines once a trained reviewer confirms a policy violation," the report said.

The report also explained that a single video may be flagged multiple times and may be flagged for different reasons. "Reviewers evaluate flagged videos against all of our Community Guidelines and policies, regardless of why they were originally flagged."