Google doodles to celebrate the festive spirit of Holi, marking the end of winter and emergence of spring in India

In the Google Doodle, the illustration has men and women drenched in the colour of festivity.

To mark the festive spirit of Holi, Google has come with a colourful Google Doodle where men and women can be seen playing Holi. 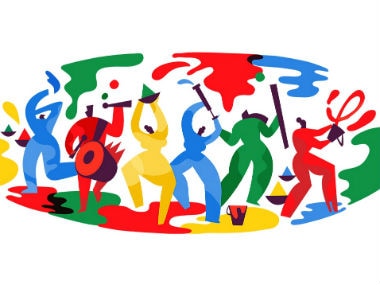 The doodle is an illustration by Amrita Marino, according to the Google Doodle blog post. Here these colourful figures of red, blue, green and yellow are symbolic. Red signifies love and fertility, yellow which is colour of turmeric is a natural remedy for healing.

On the other hand, blue is the colour of Krishna, a Hindu God who is remembered and revered in Holi. Meanwhile, green symbolizes the upcoming spring season. It also marks new beginnings.

The illustration has men and women drenched in the colour of festivity. It shows them in action where they are playing with a plethora of colours. Music plays an important role during festivities, hence men can be seen playing  drums or dhol.

Holi which marks the end of winters and emergence of the spring, sees the year coming full circle.

This is not the first time Amrita Marino has contributed with her doodles. Since the past few years, Marino has been contributing her illustrations that have been appearing for Holi on Google Doodle.