According to Apple, the glass used is a reinforced by an internal laser welded steel and copper structure.

The iPhone 8 and the iPhone 8 Plus both have a glass back, mainly to support wireless charging. According to Apple, the glass used is a reinforced by an internal laser welded steel and copper structure. Apple calls the glass "the most durable ever in a smartphone." It was not clear during the September launch event if Apple was talking about the front or the back glass, but in a drop test conducted by YouTube PhoneBuff, it is clear that the glass on the Samsung Galaxy Note 8 is stronger than the glass used on the iPhone 8 Plus. 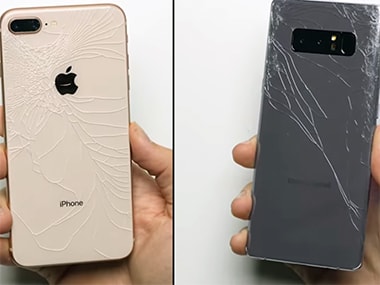 A drop machine was used for the drop tests. There were three kinds of tests conducted, a back drop test, a front face drop test and a corner drop test. Both the devices have a rather fragile back, with the glass shattering in the first drop itself. The damage to the Samsung Galaxy note 8 was more severe than that of the Apple iPhone 8 Plus. Both the phones remained fully functional after the back drop test. In the corner drop test as well, the damage to the Samsung Galaxy Note 8 was a little more than that on the Apple iPhone 8 Plus.

On the face drop tests, the glass shattered near the edges of the screens on both the phones. The curved screen on the Samsung Galaxy Note 8 helped to contain the damage to the corners, while the cracks on the iPhone 8 Plus screen extended into the device. However, both phones were functional. After that, a series of front face drop tests were conducted. The Apple iPhone 8 Plus did perform marginally better in the first two drop tests, but the Samsung Galaxy Note 8 was the clear winner at the end of the tests.

During the course of the repeated front drop tests, the cracks on the back of the devices got exacerbated. The Samsung Galaxy Note 8 was functional even after ten drop tests, but the Apple iPhone 8 Plus was not usable at all after the eighth drop. The cameras on both the phones were not working at the end of the tests. Check out the complete video of the drop test below: