Digital space should not become a playground for terror, says Narendra Modi

Noting that cyber attacks are a significant threat, Prime Minister Narendra Modi on 23 November said it must be ensured that digital space does not become a playground for forces of terror and radicalisation. 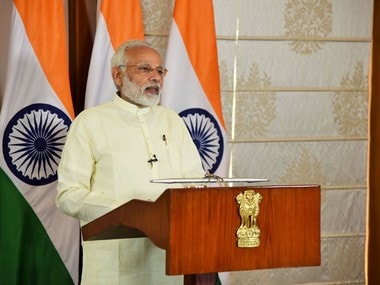 "The quest for an open and accessible Internet often leads to vulnerability. Stories of hacking and defacement of websites are the tip of an iceberg. They suggest that cyber attacks are a significant threat, especially in the democratic world," he said while inaugurating the fifth edition of the Global Conference on Cyber Space (GCCS).

In identical remarks, IT Minister Ravi Shankar Prasad said radical elements and terrorists are abusing social media platforms for perpetuating hate and terror but India is determined to address the misuse of cyber space and thwart them.

"Our government has effectively used social media for giving voice to the unheard but it is equally true that radical elements and terrorists are abusing this medium for perpetuating hate and terror. The radicalisation of young people through tools of social media poses grave threat to humanity," Prasad said during his address to the gathering.

"The world needs to come together to address the misuse and abuse of cyber space by terrorists and hackers," he added.

"Misuse of Internet for child pornography is posing grave threat to childhood. Financial frauds and cyber attacks can eliminate the trust of ordinary citizens in cyber space. Therefore, we all need to speak in one voice against cyber crimes," Prasad stressed.

"We need to ensure that vulnerable sections of our society do not fall prey to the evil designs of cyber criminals. Alertness towards cyber security concerns should become a way of life," he said.

Modi said that one of the major focus areas should be the training of well equipped and capable professionals to counter cyber threats. "The term 'hacking' may have acquired an exciting, even if dubious, overtone. We need to ensure that cyber protection becomes an attractive and viable career option for the youth.

"On a related note, nations must also take responsibility to ensure that the digital space does not become a playground for the dark forces of terrorism and radicalization. Information sharing and coordination among security agencies is essential to counter the ever-changing threat landscape."

Modi said countries can strike a fine balance between privacy and openness on the one hand and national security on the other. The theme of the two-day GCCS conference is "Cyber4All: A Secure and Inclusive Cyberspace for Sustainable Development".

Modi said digital technology had emerged as a great enabler. It had paved the way for efficient service delivery and governance. It was improving access in domains from education to health. It was also helping to shape the future of business and economy.

"Through each of these ways, it provides the less privileged sections a more level playing field. On a macro-scale it has contributed to the emergence of a flat world where a developing nation like India can compete on a level footing with developed nations."

Saying Internet had provided 'ease of living' to Indians, Modi added: "Empowerment through digital access is an objective the government is especially committed to. We believe in mobile power or M-power to empower our citizens."

Modi on Thursday launched the Unified Mobile Application For New-age Governance (UMANG) Mobile App, which will provide over a hundred citizen-centric services.

Thousands of delegates from 131 countries and ministers from 26 countries are in the capital to attend the two-day event. There was also virtual participation from over 2,800 locations globally.