The Supreme Court, in yesterday’s hearings, issued interim orders extending the deadlines for Aadhaar based linking until the disposal of the case. However, it drew an exception for the deadlines for subsidies, benefits, etc. under Section 7 of the Aadhaar Act. Thus, for receiving these subsidies, etc. people will have to acquire an Aadhaar card before 31 March, 2018. The result is that for a large and very vulnerable section of society, Aadhaar has been made mandatory. 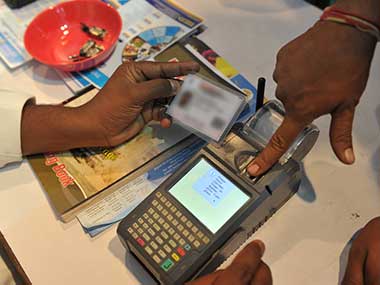 Section 7 of the Aadhaar Act deals with the production of an Aadhaar number/ enrolment ID, or undergoing Aadhaar based authentication to receive benefits, subsidies, etc. under Section 7. This has led to several notifications being issued under Section 7, such as those for the beneficiaries of the mid-day meal schemes, the Atal Pension Yojana or for the Cash Transfer of Food Subsidy under the National Food Security Act. These include several services which are essential for the survival of the very vulnerable sections of society, whether it is the mid-day meals for school children, pensions for the old, food subsidies for the poor, stipends for teachers, scholarships for Adivasis, and so on.

Most of these notifications contain the following, standard instructions:

i) Eligible beneficiaries should furnish proof of Aadhaar / undergo Aadhaar authentication.
ii) Those who have not yet enrolled for Aadhaar are to enroll for Aadhaar by the prescribed deadlines.
iii) Arrangements shall be made for enrolling in Aadhaar.

The impact of the interim order (summarised at the end of this article) is that the last prescribed deadline for enrolling in Aadhaar for receipt of these subsidies, which was 31 March, 2018, will not be extended. After this date, people who don’t have an Aadhaar card will not be able to avail of their benefits or subsidies.

Section 7 is, in effect, upheld

The result of this is that the Supreme Court has, in effect, upheld the validity of Section 7 of the Aadhaar Act, to the extent that it mandates the use of Aadhaar for receipt of subsidies and benefits. Even though this is an interim order and not a final verdict, the repeated extension of deadlines through various interim orders was done in order to avoid a fait accompli. This purpose will be defeated if a large section of society is forced to adhere to these notifications before the outcome of the case.

The importance of waiting for the outcome of the case before mandating Aadhaar is in view of the numerous violations of constitutional rights that could be happening due to Aadhaar. The validity of Section 7, in particular, is a very crucial issue being debated in the Aadhaar case.

The most obvious argument is on the exclusion caused as a result of mandatory Aadhaar. This is first, due to the probabilistic and inaccurate nature of biometric authentication, and second, because people cannot provide an alternate identity document under this Section. The Supreme Court itself had observed that this exclusion could be a violation of the right to equality under the Constitution. The violation of the right to life and liberty due to this exclusion is an even more crucial issue.

The large-scale violation of privacy, be it through the collection of biometrics or of metadata, is yet another issue. The effect on a person’s constitutional right to dignity is also an issue, in terms of treating an entire population to be impersonators merely due to their lack of an Aadhaar card or the failure to successfully authenticate via Aadhaar. Each of these arguments in effect fails if, by 31 March, a large number of people are forced to rely on Aadhaar, regardless of whether or not it violates their constitutional rights (since the Supreme Court is yet to rule on this).

The current order, thus, comes as a huge disappointment to those hoping for relief from their issues with Aadhaar. For those facing authentication and other issues with Aadhaar, the only option will be to rely on the UIDAI’s exception handling mechanisms. Given the extent of exclusion that is being reported, it is unclear to what extent these mechanisms have actually been implemented or are effective in solving people’s issues.

In addition, it is unclear if the exception handling mechanisms accommodate people who choose not to have Aadhaar. Until the Supreme Court rules on this, the people do have a right to choose not to enroll for Aadhaar. The current order, however, in effect takes away this right for a large section of society.

Linking under these Sections

Note that many of these notifications under Section 7 do not deal with linking, meaning that their cards or accounts pertaining to the schemes will not be invalidated. Their right to obtain benefits, however, will definitely be affected.

Where notifications have been issued under Section 7 specifically for such linking, the accounts will be invalidated as well. Aadhaar linking has been prescribed for certain schemes such as MGNREGA and for PRAN cards. However, it is unclear under which law these are prescribed and subject to what deadlines. Where they are prescribed under Section 7, however, these accounts risk being invalidated after 31 March. This is yet another risk to constitutional rights that a large section of people can face before the pronouncement of the final verdict.

The Supreme Court should reconsider its order

There are serious questions of privacy breaches as well as violation of constitutional rights to be decided in this case. It was taking the seriousness of these questions into account that the 2015 order of the Supreme Court, the first interim order, had restricted Aadhaar to six specified schemes only. It is hoped that the Supreme Court will reconsider the exception it has drawn out for subsidies, etc., under Section 7. The use of a system which (possibly) violates people’s constitutional rights should not be made mandatory before the Court decides on its constitutionality. Summary of the SC’s interim order

i) For all schemes of Central and State government ministries or departments (with the exception of those under Section 7, discussed above).
ii) For all existing bank accounts.
iii) For new bank accounts: Linking can be completed by the extended deadline, but either Aadhaar card or proof of enrolment with Aadhaar must mandatorily be furnished with the application for the new account.
iv) For e-KYC for mobile phone linkages.
v) For linking with PAN: Aadhaar-PAN linkages continue to be governed by the Binoy Viswam judgment, i.e., those who do not have an Aadhaar need not link their PAN cards, but those who do need to link it by the extended deadline.

vi) This order will also govern the Passport (1st Amendment) Rules, 2018. These rules say that an Aadhaar card must be produced to apply for a tatkal passport. Now, as per the Supreme Court’s order, an Aadhaar card will not be required for applying for a tatkal passport until the disposal of this case. The rules do not mention Aadhaar linking, nor do they contain any deadline for acquiring an Aadhaar number.
vii) For schemes for which notifications have been issued under Section 7 of the Aadhaar Act, whether for Aadhaar based authentication for receipt of the scheme or for Aadhaar linking or seeding, the deadline of 31 March for enrolling in Aadhaar has been retained. Persons failing to provide an Aadhaar number/ enrolment number will not be entitled to receive benefits after 31 March.