Senior counsel Neeraj Kishan Kaul on behalf of the Digital Lenders Association of India and others also argued that the private sector should be allowed to use Aadhaar.

Editor's Note: This copy was published on 27 April, 2018. It is being republished in light of the Supreme Court's verdict on the constitutionality of Aadhaar likely being pronounced tomorrow.

On Day 34 of the Aadhaar hearings, advocate Gopal Sankaranarayanan continued his arguments for the Centre for Civil Society, an intervenor in the Aadhaar case. He argued that the Aadhaar Act was a valid and balanced law with sufficient safeguards. The exception to this was of a few provisions like Sections 47 and 57 which need to be struck down. He argued that the mandatory use of Aadhaar for anything other than Section 7 is manifestly arbitrary. 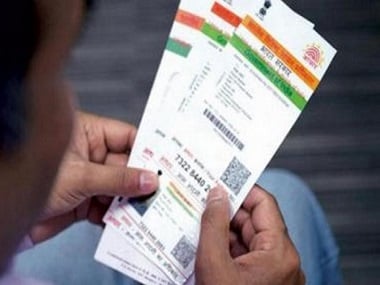 Senior counsel Neeraj Kishan Kaul on behalf of the Digital Lenders Association of India and others also argued that the private sector should be allowed to use Aadhaar.

Aadhaar provides one kind of identification

In the previous hearing, Sankaranarayanan had argued that the Aadhaar Act is a valid law, subject to certain provisions which need to be struck down. The right to identity, he had argued, is an absolute fundamental right, and Aadhaar provides one kind of proof of identification. The Bench now stated that a person does have multiple identities, be it as a father, husband, of citizenship, etc. Aadhaar, however, does not destroy those identities. The counsel, here, described Aadhaar as a number identifying a person as a beneficiary of a particular subsidy, benefit or service.

He argued that he was in support of the Aadhaar Act because of the safeguards and pillars on which it stands, but Section 139AA of the Income Tax Act (Aadhaar PAN linking) takes away those. He argued that there was no mass surveillance through Aadhaar. The privacy concerns with Aadhaar, he argued, were valid, but the Aadhaar Act passes all the tests for privacy and constitutionality that are laid down.

Next, he argued that Section 5 requires the UIDAI to take special measures towards the vulnerable groups such as senior citizens, unskilled workers, etc., and thus indicates a discharge of obligation by the State. Section 7, he argued, is also a beneficial provision. He argued that the even if someone doesn’t have Aadhaar, the State has an obligation to identify the person, which has led to Section 7 being worded the way it has been (the provision of alternatives to Aadhaar numbers). Recognition of the identity of every person, he argued, is an international obligation. He went on to cite several European and US judgments on the issue of the right to identity.

The Bench, here, asked the counsel to deal with the petitioner’s contention on Aadhaar as the only identification mechanism for Section 7 benefits and is thus mandatory. To this, the counsel responded that the answer was in Article 266(3) of the Constitution of India, which states that no funds from the Consolidated Funds can be appropriated except in accordance with the law. The State, he argued, has the onerous obligation of securing public funds, which is why Section 7 is reasonable.

Next, he argued on the issue of Aadhaar being made into a universal identification, and all other identity documents that were used to get Aadhaar were rendered irrelevant. He argued that allowing 18 proofs of identity, and making Aadhaar available for all residents makes the absolutely foolproof identity claim doubtful. Aadhaar, he argued, was only as secure as the proofs of identity provided. These factors, he stated, must be kept in mind while deciding on the issue of proportionality. Aadhaar Act can remain balanced only if uses for all purposes other than Section 7 remains voluntary.

Use of Aadhaar for anything other than Section 7 is arbitrary

The Aadhaar Act, he argued, has a balance because of the limited use under Section 7. Section 139AA, on the other hand, lacks this balance. He argued that mandatory use of Aadhaar for anything other than Section 7 was manifestly arbitrary. The Aadhaar Act can remain balanced only if uses for all purposes other than Section 7 remains voluntary. He further argued that while the Aadhaar Act was in furtherance of the Directive Principles of State Policy, Section 139AA was not.

Only the UIDAI can approach Courts

Next, he turned to the issue of proportionality, arguing that for this, the test of the least restrictive invasion does not apply, and instead the test of whether there was balance was to be applied. The Aadhaar Act, he argued, had sufficient safeguards and prescription of offences for this balance. He, however, challenged Section 47, which gives only the UIDAI the power to approach courts with grievances, as being against natural justice. He further stated that having embedded or smart cards instead of the centralised CIDR would be less secure since people could misplace their cards.

Next, he argued that the authorities were showing hubris with respect to their security levels. This, he argued, was questionable, citing the example of encryption levels, the 2048 bit asymmetric keys, as not the best available. There were huge holes in terms of security, exclusion and authentication failures, which needed to be plugged before everyone was made to use it.

Next, he turned to the issue of informed consent, arguing that the safeguards under the Aadhaar Act were in addition to those under Section 43A of the IT Act and the IT Sensitive Personal Data Rules. The application of these rules, he argued, implied that there must be informed consent whenever Aadhaar was used outside of the Aadhaar Act, and also an opt-out.

‘Any appropriate’ response to the authentication request

He then challenged Section 8(4) of the Aadhaar Act, which allows the UIDAI to respond with ‘any other appropriate response sharing such identity information’, in response to an authentication request. This, he argued, is a privacy violation, which could not be counter-balanced with a state interest. A person’s address, for instance, may be private data.

Lastly, he argued that Section 29(2) of the Aadhaar Act, which states that identity information must be shared only in accordance with the Aadhaar Act and regulations, ignores the compulsory mandate of Section 4(b)(xii) of the Right to Information Act, which requires public authorities to publish details of the manner of execution of subsidy programs.

The private sector should be allowed to use Aadhaar

Next, senior counsel Neeraj Kishan Kaul commenced his arguments on behalf of the Digital Lender’s Association of India, and other associations who have built their businesses around Aadhaar. He argued that the free flow of information is necessary, citing the example of how banking correspondents empowered the poor, women and also migrant labour. When questioned by the Bench on Section 57 of the Aadhaar Act, he stated that Section 57 should be voluntary, and based on consensus. Aadhaar, for instance, was essential for microfinance via kirana shops and banking correspondents.

The Bench, here, questioned why there was a need for Aadhaar based central authentication. To this, he argued that Aadhaar was a powerful tool and an effective and a cost-effective method which already exists, and therefore the private sector should be able to use it. The information that can be collected via Aadhaar, he argued, is collectible even without Aadhaar.

The real issue was unauthorised sharing, which is a problem even outside of Aadhaar, and thus these aren’t grounds to strike down Section 57.

Virtual ID, he argued, was still better, since there could be no storage of Aadhaar numbers. The speculative possibility of identity theft, he argued, will not defeat the statute. Further, location of the AuAs and KuAs is never shared, so there is no question of surveillance.

Next, counsel Zoheb Hossain commenced his submissions for the UIDAI, arguing that social and economic rights were enforceable rights. The positive obligations on the State, such as with respect to food, shelter, etc., were enshrined in Article 21 of the Constitution. He argued that Aadhaar is an infrastructure that helps progressively achieve these positive duties of the State under Article 21.

The arguments will continue on 2 May.

Sources of the arguments include LiveTweeting of the case by SFLC.in and Prasanna S.