This unique Xbox One S responds to music with LED lighting effects: Here’s how you can win it

Microsoft’s Xbox division has partnered with DJ duo The Chainsmokers to create a unique Xbox One S that responds to sounds with an LED light show.

Microsoft’s Xbox division has partnered with DJ duo The Chainsmokers to create a unique Xbox One S that responds to sounds with an LED light show. The console will be given away to one lucky winner later in September. 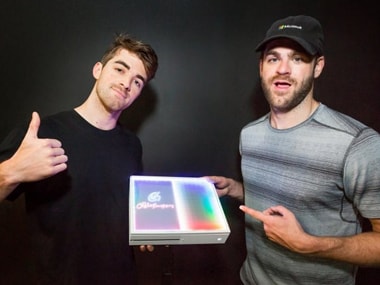 The LED-lit, Chainsmokers edition Xbox One S from Microsoft

The custom Xbox One S is a white console that features a USB-powered microprocessor that converts sound to lighting effects in real-time. An array of 60 pixels illuminate an acrylic display to create a 3D, dynamic light show, says Microsoft.

“We were really pumped to work with Xbox on this project and help bring our music to life in a new way, by combining it with the best gaming console in the world,” said The Chainsmokers in a press release.

There’s only one console to give away and that console will be given to a fan explain why they love this custom Xbox One S in a response to the giveaway announcement on The Chainsmokers’ Twitter page.

We partnered with @Xbox to create this this amazing Xbox One S console. Tell us in a Tweet why you love it so much to win! pic.twitter.com/r3OY1WCqWi

Unfortunately for fans outside the US, the giveaway is not applicable to them. Entry is restricted to US citizens who are over the age of 14 years. Minors will need their parents’ or guardians’ consent.

This won’t be the only custom Xbox One console made available to fans though. Microsoft has promised that new, unique consoles are coming and that they will be made in partnership with “top personalities” in music, sports, television, etc.