"The aim of the gaming platform – Sachin Saga Cricket Champions – is to bring cricket fans together and enable each one of them to ‘experience my journey", Tendulkar said.

Cricket icon Sachin Tendulkar unveiled a digital game featuring him, developed by JetSyntheys, a leading digital entertainment and gaming firm. "The aim of the gaming platform – Sachin Saga Cricket Champions – is to bring cricket fans together and enable each one of them to ‘experience my journey", Tendulkar said. 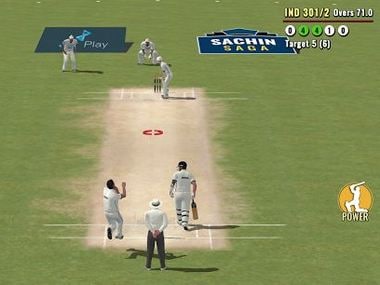 Tendulkar said in his heydays, he used to play video games in parlours. “During my stint with Yorkshire in 1992 and during 2003 World Cup in South Africa, I used to visit video parlours along with team-mates. Even at home, I do this stuff and my son joins in too. I love doing it,” he said.

Tendulkar said the company worked on this project for two years and shot his batting in a high-tech studio in London where a James Bond movie had been filmed.

He said he had to wear a special suit with 26 to 27 receptors on his body, which captured the body movements and footwork while he displayed his batting skills. Thirty-six cameras were used for the shooting. More than anything else, the gaming platform speaks of his important innings than the 100 centuries he scored, Tendulkar said.

“I must give one example – my first Ranji Trophy match was the most important for me at that point of time in my career because there were question marks whether a 15-year-old could perform, and if he doesn’t, his career is destroyed,” he said.

Those were the kind of thoughts running through his mind, but he got a hundred and changed his career, Tendulkar said.

Speaking to PTI on the sidelines of the event, JetSynthesys non-executive chairman Kris Gopalakrishnan said the company expects to get five million downloads in next 60 to 90 days. “The one million pre-registrations clearly indicates great interest shown by people on this platform, and we would like to build and improvise it based on the feedback, we get,” he said.

To a query, he said he has invested in this venture in his personal capacity, but did not reveal the numbers. JetSynthesys vice chairman and managing director Rajan Navani said the platform will feature 23 languages in future. Gopalakrishnan said the company wants to reach out to a large number of people by providing this entertainment to low-end smartphone users. Right now, the company has two studios at Pune and Mumbai for shooting purposes.

“Through this game, the player gets a chance to step into the shoes of Tendulkar and relive his innings from some of the most memorable matches he played for India,” said JetSynthesys Navani.