Sachin Saga Cricket Champions is a celebration of Tendulkar's career, not just another mobile game

“I don't know about cricket but still I watch cricket to see Sachin play... Not because I love his play, it's because I want to know the reason why my country's production goes down by five percent when he's in batting,” former US president Barack Obama is believed to have said once. Legendary cricket journalist Peter Roebuck had noted how the genius could "stop time in India". 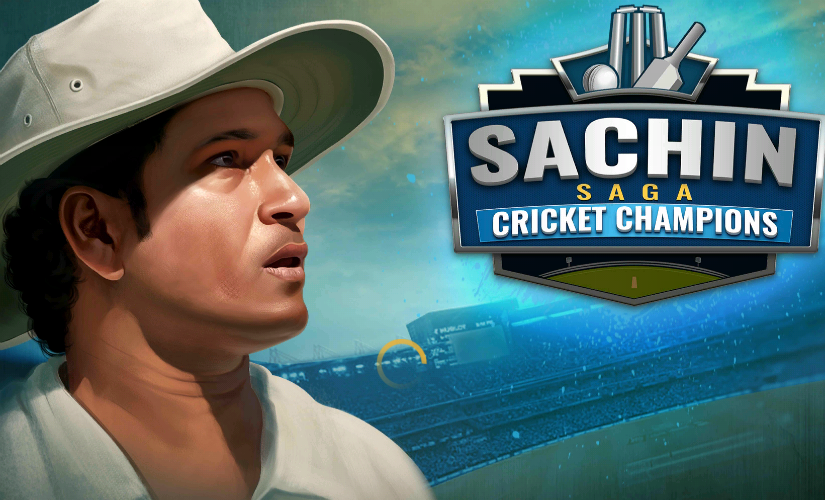 The Sachin saga has now taken the shape on an online mobile game, which promises to leave the millions of Tendulkar fans enthralled. Mobile screenshot

The game, developed by the Pune-based digital entertainment and gaming company JetSynthesys, and aptly called 'Sachin Saga Cricket Champions', is free-to-download and is available to Android and iOS users.

During the launch of the game in Bengaluru last week, Tendulkar gave a sneak-peek in the process that went into preparing and fine-tuning the gaming platform in order to make it a wholesome experience for the users. Care was taken to ensure the animated approximated the real as closely as possible. Tendulkar's batting was filmed in a high-tech London studio, where a James Bond movie had been shot. Thirty-six cameras turned their collective gaze on him, as 26-27 receptors fitted to his body mapped the minutest quirk in his batting style.

And what resulted was something pretty impressive. The game has easy controls, dulcet background music, reasonably good graphics, along with commentary and replays. Indeed the controls are extremely easy, requiring no more than swipes on the screen to play a shot. You swipe left for a shot on the off-side for a right-hander, and swipe right for a shot off the legs. The angle of the swipe determines the kind of shot played. The game works pretty well on an Android 6.0 and doesn't suffer from issues like crashing and getting stuck. Also it takes up a little under 170 MB of space. That's it.

However, there is another reason why you should play the game – and that is perhaps the biggest of them all. Sachin Saga allows users to relive and be a part of some of the most memorable knocks in Tendulkar's career. The 'Legend' mode, which is one of the two modes that the game offers, allows them to share the ecstasy of a 15-year-old scoring a century on his Ranji Trophy debut for Mumbai against Gujarat, on 10 December, 1988.

"My first Ranji Trophy match was the most important for me at that point of time in my career because there were question marks whether a 15-year-old could perform; and if he doesn’t, his career is destroyed,” Tendulkar said during the launch of the game.

Each 'knock' starts with a description of what Tendulkar's contribution was, and why the match was significant for him and his team. A part of what Tendulkar scored in that knock is chosen and a target is set for the gamers to achieve. So essentially, you start at a particular stage in Tendulkar's innings (or on some occasions, play the entire innings), and have to rattle off the remainder of the runs and do it in such a way so as not to overshoot the number of balls that Tendulkar had actually taken. The collection of deliveries are, therefore, chosen from the end of the innings backwards. The stiffness of the target, or in other words, the number of runs that you are needed to score in the given set of deliveries depends on how briskly Tendulkar had scored those runs himself.

For instance, the first match that you encounter, which is a part-replication of Tendulkar's Ranji debut, the last 24 balls off his 129-ball 100 are picked up. You have a situation with Tendulkar batting on 85 off 105 balls. A simple calculation tells you that you require 15 runs off 24 balls. That's your target! 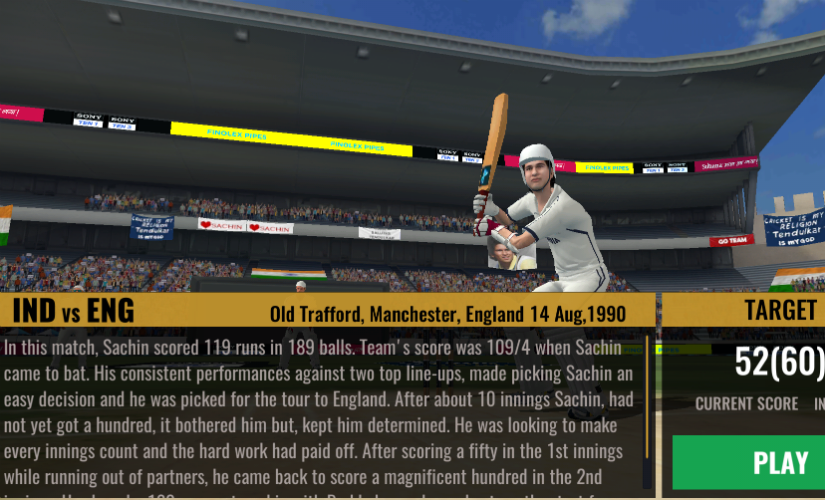 The charm of Sachin Saga stems from it being a trip in history and tying the Tendulkar enthusiast even more closely with his 'Cricket God'. In that sense, Sachin Saga is more than a mobile game.

The bouquet of knocks offered include some of the most iconic ones, both international and domestic — Tendulkar's knocks against a fearsome Pakistan attack as a 16-year-old, his brutal assault on spin legend Abdul Qadir, his first Test century, against England in Manchester in 1990. There are the twin hundreds he scored in Sydney and Perth respectively, in the tour Down Under in 1991-92, which are widely considered two of his best innings ever. There are innings from his county stint with Yorkshire in 1992. Incidentally, he was their first overseas player. There is the Singer World Series innings in 1994 that was his first One-Day International (ODI) hundred, the first of 49.

Then, there are his World Cup hundreds. There is the one he scored at the 1999 World Cup against Kenya after returning from his father's funeral. There is his double ton in a practice match against the visiting Australians in 1998, and the unforgettable 155 in Chennai in the Test series that followed. 'Desert Storm' figures prominently in the list, as does the destruction of Pakistan in the 2003 World Cup. His ODI double ton in 2010, the only one in world cricket at that time, his 100th international century and the last innings for India are there too, as are some of his memorable Indian Premier League (IPL) knocks.

The game will enable fans to "experience my journey", according to Tendulkar, and it does precisely that. Along the way, there are interesting trivia related to Tendulkar's career, which you can unlock by achieving targets. For instance, on the eve of the Harris Shield final, Sunil Gavaskar's nephew had gifted a teenaged Tendulkar a set of pads with blue lining inside, that were used by Gavaskar himself. Tendulkar was overjoyed. It was an incentive for the young boy to do even better. He batted for close to two days and smashed a triple century. The significance of that innings lies in the fact that he was selected as a Mumbai Ranji Trophy probable soon after. The game is sheer nostalgia. It harks back to a day and age when Tendulkar was the mascot of a nation striving hard to make its presence felt on the global stage. Mobile screenshot

The game is sheer nostalgia. It harks back to the day and age when Tendulkar was the mascot of a nation striving hard to make its presence felt on the global stage. In many ways, India's success and failure got inextricably connected to that of Tendulkar.

The 'Event' mode allows the users to choose their team and play tournaments. Players can win 'stronger' players with favourable performances in the 'Legend' mode as well.

There are a few shortcomings, though. The graphics could have been a lot better and the commentary is repetitive. The players other than Tendulkar don't look themselves, nor do their bowling actions and batting styles match those in reality (except for the bowling action of Shane Warne, which has an uncanny similarity with the real). Also there is no bowling option, even in the Events mode, nor can you take more than a single too often while running between the wickets, even if there is a chance to do so. Moreover, it looks like you have been allowed limited control of the movement of the batsman; so you can't seem to be able to make room to play a shot while staying inside the crease, for instance, though you can step out of the crease. The venues where the matches are being 'played' could have been made to look like the stadia where those matches were actually played. It is a feature that is part of some of the other mobile gaming platforms, and that's where Sachin Saga lags behind.

However, notwithstanding these shortcomings, the charm of this game stems from it being a trip in history and tying the Tendulkar enthusiast even more closely with his 'Cricket God'. In that sense, Sachin Saga is more than a mobile game. It is another celebration of the life and career of Tendulkar, and that's why it is a unique and one of the more innovative mobile games to arrive in a long time. The game has a lot to offer that would keep a cricket connoisseur and Tendulkar admirer enthralled. It already has five lakh downloads, which gives an idea of its popularity. All things considered, I would say Sachin Saga warrants a four out of five. What do you say?