Gaming peripheral manufacturer Razer released two new wireless gaming mice including the Basilisk Ultimate and Basilisk X Hyperspeed. Although both the devices are identical, they differ in pricing, features and most importantly, RGB lighting. The two gaming mice come equipped with the company’s wireless technology called Hyperspeed. Claimed to be 25 percent faster than other wireless technologies, it claims high-speed transmission, low click latency, and seamless frequency switching. The mice can connect to a desktop or laptop using a 2.4 GHz dongle. It also supports wireless connectivity over Bluetooth. Both mice have an ergonomic design for right-handed gamers.

There are 11 programmable buttons on the Razer Basilisk Ultimate that can be controlled and remapped using the Razer Synapse 3 utility software for desktop. It comes with a paddle button as well that can be assigned any mouse or keyboard function, generally used for lowering the DPI for precision while sniping in FPS games. The RGB lighting experience is delivered using 14 Razer Chroma lighting zones that again can be controlled using Chroma Studio in the utility software. Gamers can store up to five profiles onto the mouse’s onboard memory. On the bottom, there’s a dial to customise the scroll wheel resistance. Whether gamers prefer a smooth or tactile feel while scrolling the wheel is up to them. 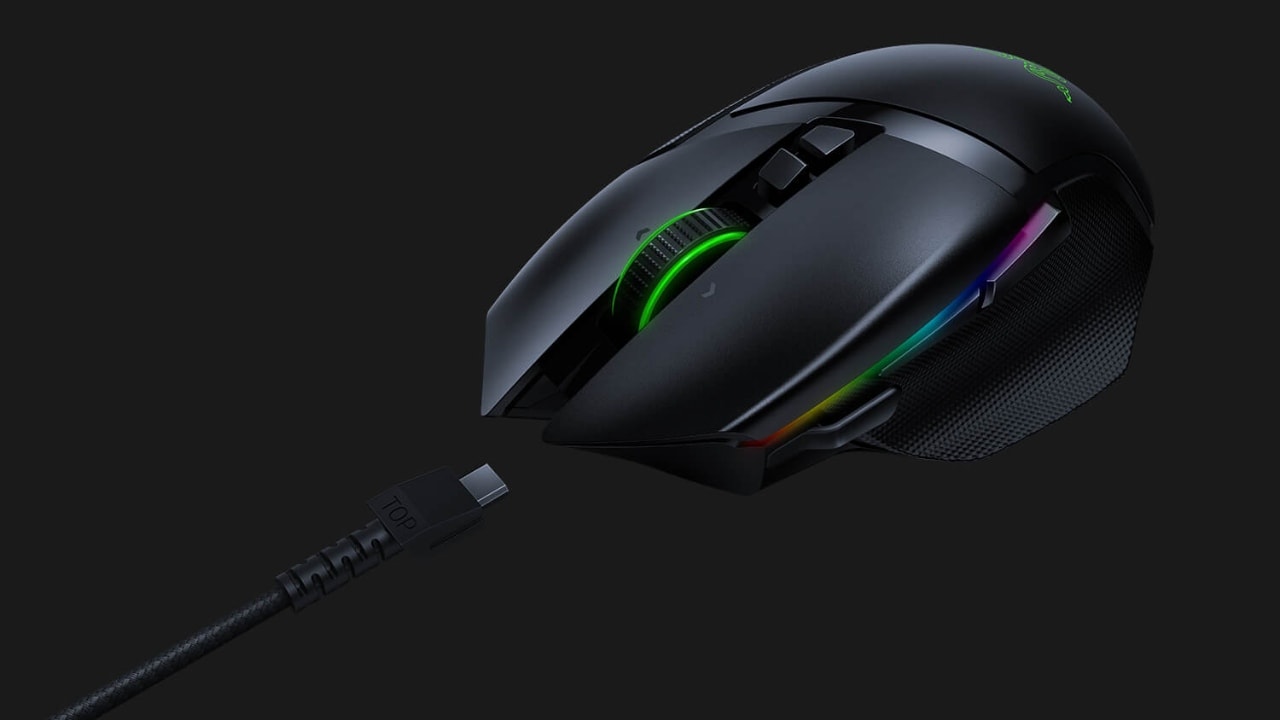 The Razer Basilisk Ultimate offers a battery life of up to 100 hours. Image: Razer

For the internal hardware, Razer teamed up with mouse sensor manufacturer Pixart to develop the Focus+ Optical Sensor. It claims to go up to a resolution of 20,000 DPI and offer a maximum tracking speed of 650 inches per second (IPS). Razer has also designed its own mouse switches called the Razer Optical Mouse Switch. Instead of using a traditional mechanical switch, as seen on others, this switch registers clicks using an infrared light beam. This technology should offer way faster response time than mechanical switches. It boasts up to a 70 million click durability.

It also comes with a charging dock enabled with RGB lighting. The Razer Basilisk Ultimate claims a battery life of up to 100 hours of running at its peak performance and it is priced at $170.

With up to six programmable buttons, the Basilisk X Hyperspeed is a toned-down version of the Basilisk Ultimate carrying almost the same design. It supports the same software utility support via Razer Synapse 3. Up to five custom DPI stages can be stored in its onboard storage. Since it doesn’t carry all the RGB lighting chops, it’s capable of longer battery life. When in the Bluetooth mode, Razer says that the mouse can run for up to 450 hours whereas, in a Hyperspeed wireless connection, it can go up to 285 hours. The Razer Basilisk X Hyperspeed can function for up to 485 hours (Bluetooth mode). Image: Razer

The internal hardware is also different from the Basilisk Ultimate mouse. It packs in Razer’s older 5G Advanced Optical Sensor that’s capable of going up to 16,000 DPI and claims a maximum tracking speed of 450 IPS. The Razer Mechanical Mouse Switches in the mouse boast a 50 million click durability which should be long enough to last for a few years. This is where Razer cut down costs to offer the Basilisk X Hyperspeed at a price of only $60.