'Raising funds for your game is the hardest thing you'll do': Raji developers reflect on how game came to be

Nodding Heads Games' Raji: An Ancient Epic launched on the Nintendo Switch last week, and the game is set for its PlayStation 4, Xbox One and PC launch on 15 October

"So sad this might not fund! The industry needs games like this. Such a totally different perspective that I thought I would never see in popular gaming... at least not this century. I will be here if that happens and you come back. We need this! Kudos to your entire team and working to see this project through."

"I saw this a week ago, it has haunted my dreams every night. I just had to back this project and I hope that it makes the goal because I'm out of good, story driven games to play"

"Dang! This is the second game that I REALLY liked that didn't reach funding. I hope you relist this campaign again! This game has HUGE promise and needs to be made!"

On 13 December, 2017, the Kickstarter campaign for the game Raji: An Ancient Epic (R:AAE) was cancelled, having fallen short by around 45 percent of its target. Undeterred, and strongly motivated by comments from backers (like the ones above), Nodding Heads Games — independent game development studio based in Pune — finally launched its single-player action-adventure title on the Nintendo Switch last week.

"We knew that Nintendo didn't have an office in India, but we didn't know that its consoles aren't officially sold here," confesses Avichal Singh, game designer and co-founder of Nodding Heads Games, adding, "We're happy with the number of downloads on the Switch so far." With one platform out of the way, the game is set for its PlayStation 4, Xbox One and PC launch on 15 October. " And that's not all. There's even a major surprise on the cards for PC gamers that will be announced sometime next month.

But we're getting ahead of ourselves. Who, then, is this Raji? And what's her story?

All caught up? Good.

While the Kickstarter campaign launched late in 2017, the seed for what would eventually become R:AAE was sown on New Year's Eve in 2013 in the city of Jaisalmer. "After a crazy 22-hour bus journey from Pune to Jodhpur and then Jaisalmer, I found myself with this frame in front of me — medieval architecture from the 16th Century. The first question I asked myself was, 'Why is this not a video game?'," says Avichal.

The quest for a marriage of Indian mythology and the action-adventure video-gaming genre saw him reach out to Shruti Ghosh, art director and fellow co-founder of Nodding Heads Games, and after a few preliminary discussions about a possible game, the wheels were in motion, culminating in a set of sketches in 2016. "Shruti put together some black-and-white 2D sketches that we took to some gamer friends and showed it to them without any context. Throwing the images out there, we asked them, 'Would you play this if it was a game?', Avichal reminisces. After receiving an overwhelmingly positive response from their friends, there was no turning back.

"We wrote a story that we thought would be engaging," recalls game veteran video game art designer and the third co-founder of Nodding Heads Games Ian Maude, "We sat around a table for days and weeks deciding on the characters and their stories, making sure to apply the five Ws (who, why, when, what and where, as coincidentally alluded to above) to every aspect — whether character, props, environments etc."

In July that year, programmer Paras Chaudhary climbed aboard the fledgling team, and they began prototyping the game in 2D on the Unity engine. "We realised that if Shruti had to handpaint all the 2D sprites, she would've ended up in hospital," laughs Avichal, "Which is why it was handy that Paras had some experience with the Unreal Engine." By October, Ian and Paras were in Pune and work on bringing Raji's tale to life was underway.

The ill-fated Kickstarter campaign the following year showcased a fully-playable demo. "The gameplay in that teaser was influenced by FromSoftware's Dark Souls, in terms of the animation rather than the series' notoriously high difficulty. The animation was perfect for combat, but it made the gameplay slower," explains Avichal. Screenshot from Raji: An Ancient Epic

The crowdfunding experience would serve both as a sobering wake-up call and a major learning experience. As the team learned, even 2,121 backers and pledges worth over $87,000 wasn't enough. "Unfortunately, we didn't have a PR or marketing agency — which is how you do things on that platform. Sure, we raised $87,461. But it wasn't enough," says Avichal. For those unfamiliar with the workings of Kickstarter, it functions on the all-or-nothing principle (unlike other crowdfunding platforms like Indiegogo). This dictates that unless a campaign is able to raise funds equal to or in excess of its originally-stated target, it receives nothing.

At this point, the financial stress was massive. "Shruti sold off her apartment and we had all eaten into our savings in order to just buy us some more time, because we were pitching R:AAE to publishers. It was a ticking time bomb because if we didn't get hold of a publisher by a certain date, we were done," Avichal explains, adding, "The Kickstarter didn't succeed monetarily, but it got us a great deal of visibility." A look at the comments on the Kickstarter and the sort of praise the demo received in the international media makes it even harder to believe that it was put together in 10 months by a team of six people.

Between 2018 and 2019, Nodding Heads Games' luck began to change, with the award of an Unreal Dev Grant that helped them "survive for a few months". This new lease of life helped the studio stay afloat long enough to seal the deal with publisher Super.com and to expand its team from seven to 13 members. And the rest is history.

"It's great to finally see the game out there and share the Nintendo platform with such indie developers as Supergiant Games and Thunder Lotus," sighs Avichal.

At first glance, the vibrant colour palettes and evocative sound design are a refreshing revelation and certainly make R:AAE seem like an attractive proposition that's well worth your money. But a fact to which most gamers will testify is that no matter how good a game looks and sounds, if it plays like garbage, that's where it's going to end up. Remember Dragon Age II?

It's fortunate, then, if you were planning to check out the game that the gameplay and associated mechanics appear to be receiving praise among the global gaming community. And while Tech2 is presently in the process of reviewing the game, certain elements such as the wall-running and combat already stand out.

"[This sort of] gameplay was territory we were exploring for the first time. I had worked on Farmville and Empires and Allies," acknowledges Avichal, "But I'd never done action-adventure games or combat. And there's so much inspiration out there like Shadow of Mordor, Prince of Persia, God of War, Bastion and others. We all have our favourite games, so we made a list of games and gameplay mechanics we've enjoyed and then began whittling down the list to include those that would work for Raji." 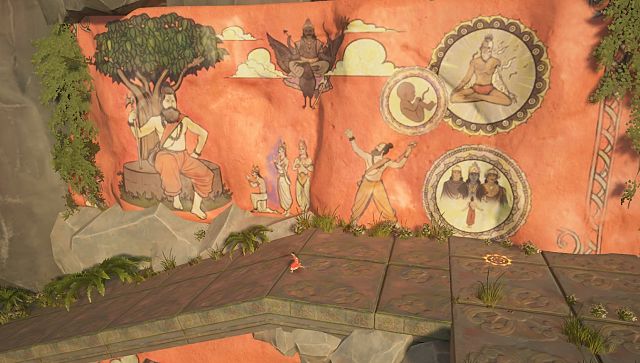 Screenshot from Raji: An Ancient Epic

The aforementioned Kickstarter demo, as mentioned earlier, contained relatively slower gameplay and having found a publisher, ergo funds to complete the game, the team was able to spend a couple of months tweaking it. "We asked ourselves, 'Who is Raji?'. Well, she's an acrobat and the gameplay had to reflect that," he reasons, "The underlying theme was 'movement leads to combat' and so we had to design the moves accordingly. Wall-running, pillar mechanics and stuff like that emerged from there. We also added parkour and the platforming elements of the game that weren't part of the demo."

Adding that the depth in movement mechanics allowed the developers to break up the pacing of the story, Avichal says, "Just 'combat-story-combat-story' would've gotten boring. And level design would've been extremely boring if it was so linear. So we then worked on combining these mechanics — parkour into combat and so on." But the feature about which he expresses most pride is the protagonist's triple dodge mechanic. "Dodge rolls in the [fighting] arena actually make you feel like an acrobat. Finally, it felt like the context of the story caught up with the gameplay: Fluid and acrobatic."

Elsewhere, Nodding Heads Games decided to do away with that most quintessential of game tropes — the health bar that increases over time. "Raji's health purposely doesn't increase from level to level, because while we want the character to be blessed by the gods, we still want her to remain human and fragile. And so, if you don't pay attention for 10 to 15 seconds, you might end up dead," he notes.

Learnings and what comes next

That there was space in the mindsets of international gamers for Hindi and Balinese mythology became clear to Ian "in 2018, when we went to the international expos and people were actually seeing what we were doing". He adds, "Seeing the reactions of people to the game last year, how their faces lit up and how engrossed they were in the story and combat just made it all worthwhile."

With the Switch launch out of the way, Nodding Heads Games is now gearing up for the massive PC, PS4 and Xbox releases of Raji: An Ancient Epic. This seems as good a time as any to look back on the most important lessons the whole experience taught the team. And among the first of these was the challenge programming for the Switch presented. Avichal points out, "It was a technical challenge and an achievement. R:AAE was always meant to go out on all three consoles, but the Switch was where a lot of technical aspects needed to be fine-tuned. We’ve identified a few issues thanks to the community and can patch them."

"The biggest learning, however," he goes on to state, "Was that finding funds for your game is the hardest thing you'll ever do. Some big names were intrigued [by the game], but because we didn’t have a portfolio, nobody was convinced that we would finish it."

In light of what happened with the Kickstarter campaign, the importance of marketing has also been underlined for Avichal, Ian and the rest of the team. "We, as co-founders, have to run the company's finances, but we also have to do our actual jobs. Next time around we definitely want to be free of the financial stress," says Avichal, "We will be hiring and expanding our team. We won't be juggling all the balls ourselves." Another area where Nodding Heads Games will be looking to expand is in pre-production, something he admits was a bit rushed this time around. All in all, very ambitious plans for the future.

"People have been saying how ambitious R:AAE was. And that we've pulled it off to a high standard. Basically, you have to have a very compelling story, very compelling mechanics, whether combat, puzzles etc," says Ian. When asked to indulge in a spot of crystal ball-gazing about Nodding Heads Games, he offers, "Is it the next Blizzard? Who knows? Why not?"

Keep watching this space for the Nintendo Switch review of Raji: An Ancient Epic