The HP Omen X is a high-end gaming laptop that’s packed to the brim with the some of the fastest components around. It’s also priced to match.

HP has announced the OMEN X laptop at an event in Germany on 22 August. The device is a high-end gaming laptop that’s packed to the brim with the some of the fastest components around. It’s also priced to match. 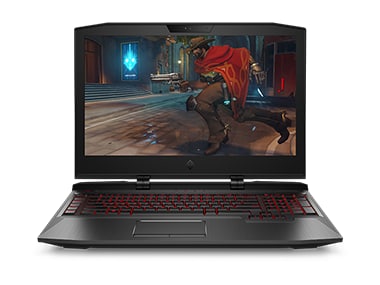 HP says that the hardware on the laptop will be overclockable and that it packs in unlocked Intel 7th generation processors. XMP profiles for RAM are also supported and speeds of up to 2,800 MHz have been tested. On the graphics front, HP has crammed in an Nvidia GeForce GTX 1080 into the device. The GTX 1080 will also be overclockable.

Since HP is using a GTX 1080, the laptop will support VR applications.

On the storage front, you get to choose from a variety of configurations, including 2x SSDs in RAID 0 and 1x SSD + 1x 7,200 rpm HDD options. Since laptop hard drives are smaller, a 7,200 rpm HDD will be consistently faster than a 7,200 desktop HDD.

The laptop is large and houses a 17-inch display. You can pick from either a 4K resolution or a 1080p, 120 Hz display option. Both options fully support NVIDIA G-Sync. The laptop also supports an HDMI 2.0A output which can handle HDR content.

The RAM and storage are accessible from a panel at the bottom and can be expanded as you see fit.

While HP claims that the keyboard uses mechanical key switches with RGB backlighting, these are not Cherry MX keys but rather, seem to use something akin to the butterfly mechanism seen on the new MacBooks.

Considering the price of similarly specced devices in India, we’d estimate that if it comes to India, it’ll be priced in the Rs 3,00,000 range.