The AORUS AD27QD gaming monitor was one of the highlights of the event, dubbed as the world’s first ‘tactical’ monitor by Gigabyte. It has a 27-inch display with a resolution of 2560x1440 and is running at a maximum refresh rate of 144 Hz. The monitor has an IPS panel with a colour space of 95 percent DCI-P3 (for reference, an iMac is at 100 percent and an iPhone at about 110 percent) and a response time of 1 ms. For video input, it has two HDMI 2.0 and one DisplayPort 1.2 ports. It also has two USB ports and audio ports.

Interestingly, the monitor supports Active Noise Cancellation (ANC) using a couple of microphones and an IC embedded in the monitor itself. A 'GameAssist' feature will allow gamers to enable timers right on the screen controlled by customisable hotkeys. This can be incredibly useful in MOBAs to monitor cooldown periods or in battle royale games to monitor the closing circle’s duration.

It consists of a Dashboard as well that will display several bits of system information including temperatures, resource usage, mouse DPI, etc. The OSD Sidekick feature is probably the most useful among the set of features that allows gamers to control the on-screen display’s functions using a mouse and keyboard. Say goodbye to spending a painful time trying to navigate through the monitor’s OSD settings using buttons. Along with all these features, crosshair overlay, black equaliser and aim stabiliser collectively will be helpful for gamers. However, the crosshair overlay might be considered cheating in some games, so use it cautiously.

Gigabyte has implemented RGB lighting on the rear of the display that can be controlled using software. The AORUS AD27QD is priced at Rs 56,500.

Coming to the AORUS Xtreme Waterforce 5G Premium Edition Bundle, liquid cooling enthusiasts and extreme performance fanatics are in for a treat. Falling in their flagship lineup, the motherboard has implemented better heat dissipation and a single monoblock to cool the CPU, VRM and chipset. The motherboard comes bundled with a pre-tested Intel Core i9-9900K that can hit 5.1 GHz on all cores. Apart from these two products, Gigabyte also showcased its AORUS RTX 2080 Ti Xtreme 11G graphics cards. The highlighted features include Gigabyte's unique WINDFORCE 3x 100 mm stacked RGB fan design, RGB ring-light effects on the fans and a staggering seven video output ports, out of which five can be active simultaneously. It has a base clock frequency of 1,770 MHz with 11 GB of GDDR6 memory. 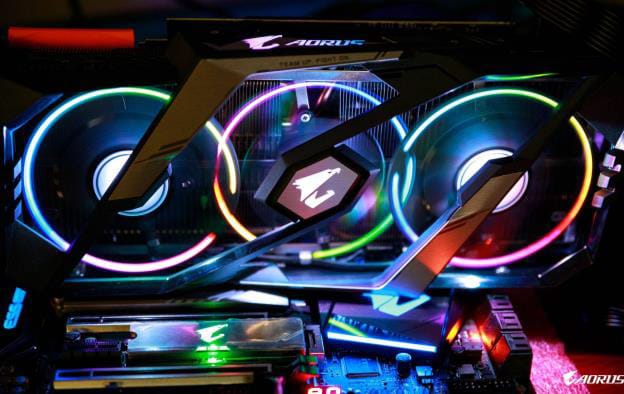 Gigabyte also displayed the AORUS RGB AIC NVMe SSD that comes in two storage capacities including 256 GB and 512 GB. It comes with RGB-lighting enabled and it can sync with all the other RGB-illuminated products using Gigabyte’s RGB Fusion 2.0.

Gigabyte said that all the showcased products are already selling in India.