The grand finals of the Lenovo Legion of Champions Series IV and Legion of Valkyries were hosted in Bangkok.

Lenovo hosted the grand finals of the Legion of Champions (LoC) esports tournament at the Pantip Plaza in Bangkok between 13-15 December. While the tournament entered its fourth edition this year, the company organised its first-ever female-only tournament in the form of the Legion of Valkyries (LoV) for Counter Strike: Global Offensive. Four teams qualified for the finals from all across the eastern hemisphere. One of the teams included GE-Rayne from India which placed second in the esports tournament. The final rounds of LoV were held on 14-15 December in a separate esports arena inside Pantip. It followed the “best of 3” format throughout the tournament, although none of the games went into the third match. Since there were only four teams, the first day saw the semi-finals where Illuminate Esports from Thailand and Global Esports-Rayne won back-to-back rounds to make it to the finals the next day. GE-Rayne gave Illuminate a good fight in the initial few rounds of the match but the latter ended up dominating them until the end. So, as it stands, Illuminate won the Legion of Valkyries and took away the trophy along with the prize money of $5,000. Reaching the semi-finals of LoV was huge, according to GE-Rayne. Most of them have been casually playing CS:GO for years and entered into the competitive scene only a couple of years ago. To bring in inclusivity and support more women in competitive esports, LoV was a good opportunity to prove themselves. However, GE-Rayne faced a major setback just a few days before the tournament.

After qualifying for the semi-finals, one of the players from the team (from Bangladesh) couldn’t get her Visa done in time. GE-Rayne was left with one player short, without any substitute, and they desperately needed another player. And they had only two days to decide. But, Lenovo was kind enough to help them out and suggested a local Thai player to fill the empty slot. So, Pannakarn “Angelica” Udomyart joined the team, which included Saloni “Meow16k” Pawar, Dilraj “COCO” Kaur, Neha “CaspeRR” Sottany, and Mansi “Matka QueeN” Sottany for the final lineup. Even though they had never played together before, the team was able to form a healthy synergy and got through the semi-finals, finally finishing second in the Legion of Valkyries. They received $3,000 as prize money. In a meeting, the team described how they face harassment and toxicity from the community whenever they play, casually or in tournaments. It's quite common for them to be accused of using cheats in-game. Sometimes they have also been accused of someone else playing the game using their accounts in tournaments. Mansi recalled a time when she had bought a knife skin in CS:GO and she was subjected to casual sexism by being told to use it in the kitchen. All the members expressed similar incidents of being heavily abused by other players, which is actually common whether you're a boy or girl. Mansi said that now they're just used to this level of toxicity since they enjoy playing the game more.

The next challenge ahead for GE-Rayne is the Asia-Pacific finals of the World Electronic Sports Games 2019 that will be held between 2-5 January in Kuala Lumpur. Lenovo chose CS:GO for Legion of Valkyries after consulting various female teams. Additionally, it’s a popular game and Lenovo also wanted to test it as a second game in the tournament. Only three teams from the South Asian region participated in the regional qualifiers, out of which GE-Rayne made it through. Since the tournament is fairly new, it’s possible that not many players around the region knew about it. Lenovo needs to ramp up its promotion and marketing so that more women are made aware of such a tournament. Although they are allowed to participate in regular tournaments in mixed teams, we don’t see that happening too often. However, if a female-only tournament exists, it will encourage more women to consider participating in them and maybe even explore an esports career.

To bump up participation, the company assured that it will be working on promoting LoC and LoV in the country through local tournaments like Rise of Legion that was held this year in August.

While Legion of Valkyries was the first-of-its-kind tournament for Lenovo, Legion of Champions has been the primary tournament that entered its fourth year this time. It witnessed 12 teams from across the Asia-Pacific region compete in the finals. After 15 rounds of intense gameplay, knockouts and chicken dinners across all the maps on PlayerUknown's Battlegrounds (PUBG), a winner was finally announced. Aerowolf Pro Team from Indonesia snatched away the Legion of Champions Series IV trophy and the $4,000 in prize money. 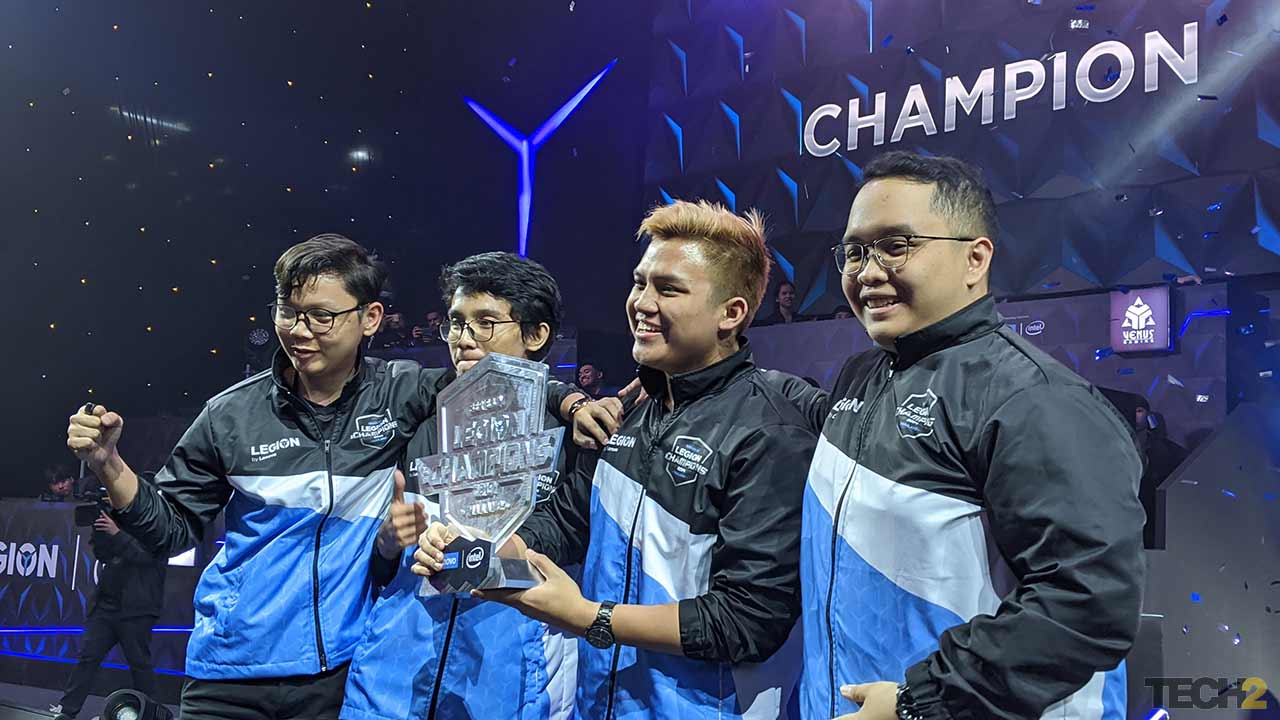 Among the 12 teams was Indian Rivals, a humble squad of four from India that had won the local qualifiers of LoC and made it to the finals. This was their first experience of an international tournament which also meant facing opponents with completely new and different strategies. It took them a few rounds to analyse and understand the gameplay of the other teams, but it was too late. At the end of the tournament, the team, which includes Rohan “HydraFlick” Ledwani, Amit “IR_Amit_Coldzera” Dubey, Dhruv “Axelin” Gupta and Nishant “iFlicks” Murlidharan, placed 12th on the leaderboard. Qualifying for the finals of LoC is already a big achievement for the squad. India isn't really big on PUBG in the esports scene, while PUBG Mobile almost has some tournament happening every other month. Before going to Bangkok for the LoC finals, Indian Rivals had won the local qualifiers of the Acer Predator League 2020 that was organised in Bengaluru.

Indian Rivals doesn't have a manager nor does it have a coach. The team is currently looking for sponsors which they say will allow them to focus on gaming without any distractions. After a year of playing PUBG in tournaments, the team is serious about considering esports as a career option.

Now that they are done with LoC, they are preparing for the Asia-Pacific finals of the Acer tournament in Manila, Philippines scheduled for February next year. The newly gained experience from this tournament and over a month of time to train will surely help them give a tougher competition, according to the team. Since Legion of Champions isn’t restricted to just one game, Tan said that PUBG won't happen next year. Lenovo will announce a different game for the next tournament, which will be the fifth LoC tournament, soon. Legion of Valkyries will also happen next year and although the company didn’t confirm anything, I’m pretty sure they are going to continue CS:GO, to keep the tournament more accessible.

Disclaimer: The correspondent was invited to the Legion of Champions Series IV tournament at Bangkok by Lenovo. All expenses related to travel, food and accommodation were taken care of by Lenovo.