With people from around the world maintaining self-quarantine and social distancing due to the COVID–19 pandemic, Facebook Gaming is hosting a virtual tennis tournament. The online tournament will see sports personalities and Hollywood celebrities compete to raise $1 billion for charity. 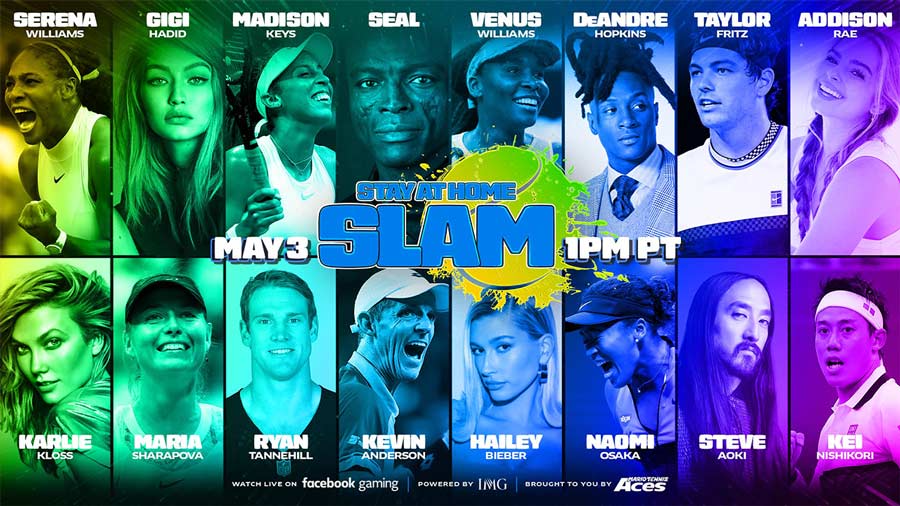 The entire tournament will be streamed online.

The tournament will commence on Sunday, 3 May. Fans in India can watch it on 4 May at 1:30 am at http://fb.gg/facebookgaming.

Facebook Gaming made an announcement on Twitter saying, “The #StayAtHomeSlam is part of #PlayApartTogether, a gaming industry initiative to help people stay safe, informed and connected through games.”

Every competitor will receive a $25K donation to the charity of their choice - with our ultimate winners donating $1M to charity! pic.twitter.com/CNpM3tU85X

Ace tennis players Serena Williams, Venus Williams and Maria Sharapova are among those who will take part in the event. To make the virtual tennis tournament all the more exciting, the commentary will be by former tennis champion John McEnroe and YouTube personality Justine Ezarik.

The #StayAtHomeSlam is part of #PlayApartTogether, a gaming industry initiative to help people stay safe, informed and connected through games. The tournament kicks off Sunday, May 3 at 1PM PST/4PM EST at https://t.co/sqW53VBc7x We’ll see you there! — Facebook Gaming #playaparttogether (@FacebookGaming) April 29, 2020

The biggest names in tennis are grabbing their virtual rackets for the #StayAtHomeSlam, live on Facebook Gaming this Sunday (May 3), in partnership with @IMGTennis.

Kei Nishikori’s competitor will be DJ Steve Aoki while Madison Keys will play against singer Seal.

Taylor Fritz and Maria Sharapova shared the excitement about the upcoming virtual tennis tournament on their respective social media handles.

Let's do this, @karliekloss! Excited to team up for the @IMGTennis #StayAtHomeSlam and to be playing for No Kid Hungry. Check it out this Sunday at 1pm PT on @FacebookGaming. pic.twitter.com/rDqJlRVNYy — Maria Sharapova (@MariaSharapova) April 30, 2020

Last month, Facebook had launched a live gaming mobile app. The app was introduced on Android devices and will be available for iOS users once Apple approves it.

Novak Djokovic, Rafael Nadal, Serena Williams to quarantine in Adelaide ahead of Australian Open instead of Melbourne

Coronavirus News Updates: Less than 50% of beneficiaries turn up for COVID-19 vaccination in Andhra Pradesh today