DIRT 5 has exhilarating, fast-paced gameplay that is bound to have you hooked from the get-go, but its story lacks depth and variety, and you're likely to get a little bored halfway through it

When I was in the ninth grade, there was this one evening where my best friend came over to my house with his PS2, a copy of Burnout 3: Takedown and a battered spare controller he'd borrowed from his cousin. I remember hooking up the console to the television, flipping over to the split-screen mode and playing for what, at the time, felt like six hours straight, but could easily have been all night. Now, as anyone who knows me can attest, I'm not the biggest fan of racing games — mostly since I'm absolutely terrible at it — so I don't have many fond memories of them, but this particular one just came flooding right back to me minutes after I began playing DIRT 5.

Thanks to my ineptitude at this genre of video games, I had no real preconceived notions heading into this review, and I came away from the experience feeling pleasantly surprised. At the heart of it, there is something deeply nostalgic about Codemasters' latest addition to the DIRT series, even if you haven't really played many of these games before.

As soon as you load it up, the bright, colourful title slide and user interface instantly announce what sort of experience you're in for, with a promise of light-hearted fun that the gameplay well and truly delivers on. It's simple, it's straightforward and most of all, it's immensely enjoyable. If you choose to drive with the pre-set controls, there are only three buttons that you really need — the accelerator, the brakes and the handbrake, if you want to pull off a couple of tight turns. However, if you're looking for a slightly more challenging drive, you have the option of using the manual transmission, in which case you will need to shift through the gears like you would in real life.

There are 10 different locations that you can race in, ranging from the snow-capped peaks of the Himalayas in Nepal to the muddy dirt tracks of rural Norway. Every location has a further set of courses that you can choose from, with each being just about different enough to justify their existence. There's also a number of different weather conditions, each of which impact your driving experience in their own unique way. Dynamic changes in weather over the course of races are commonplace, with conditions changing as the race progresses. For example, you can begin a race with beautiful blue skies, only to be hurled into the midst of an impromptu thunderstorm minutes later. The selection of cars is fairly extensive, though not at the level of something like an Asphalt or Gran Turismo. Each vehicle is highly customisable, with a great range of decals, stickers and paint jobs that you can unlock as you progress through the story and other modes. 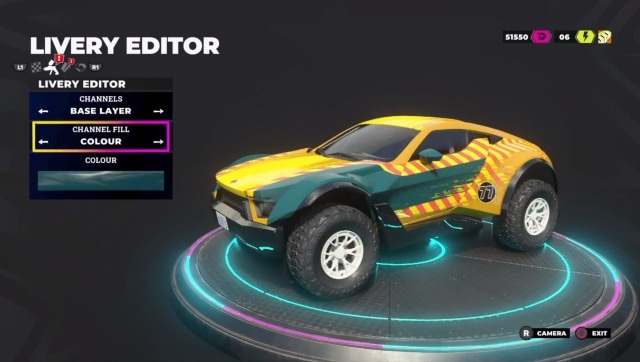 This custom paint job was done in a bit of hurry, while I was recording gameplay footage, and I initially thought it was quite hideous, which it is, but it's growing on me. Screen grab from DIRT 5

The Career mode in DIRT 5 is quite engaging, despite being as minimalistic as possible with a  complete lack of character models and cut-scenes. The story unfolds through the voices of James Pumphrey and Nolan Sykes, two very entertaining real-world podcasters and auto enthusiasts who run an in-game podcast, which acts as a wonderful tool to set the tone, while simultaneously delivering chunks of exposition in neatly packaged audio snippets. The chemistry between Pumphrey and Sykes is immediately evident, and even though I did find the recordings to be a bit laborious at times, there was never an instance where it became outright annoying, in spite of a couple of truly terrible jokes that sounded like they were written by a fourth-grader.

The duo is supported by Troy Baker, who most will know from his iconic role as Joel Miller in The Last of Us, and Nolan North of Uncharted fame. Baker plays Alex “AJ” Janicek, a sort of older brother/sensei who chimes in with useful information from time to time, while North voices Bruno Durand — a rival who lives up to his cartoonishly villainous name. 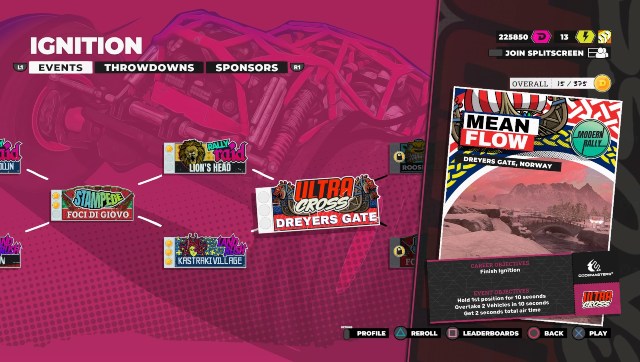 The Career mode consists of a branching series of races that gradually become more difficult, accompanied with a story told in the form of podcast snippets. Screen grab from DIRT 5

Although the accompanying vocals are quite nice, I do have a couple of gripes with the story mode.

First, it's a bit of a grind. I understand that a few levels of grinding should be expected from the game, seeing as it is a hallmark of the genre, but as I got further and further into the story, the game plateaued and there were times when I would begin to zone out a little. A few of the races can be a bit tedious at times, and they come along with a set of objectives that you need to accomplish in order to keep unlocking new branches of the story, meaning you might find yourself playing out the same race time and again. All in all, it's not really a massive turn-off, and if played over a longer duration of time, it could still retain some freshness, but honestly, I think I'd even prefer doing Skyrim's fetch quests to some of these races. Having made the heroic decision of playing on a higher difficulty level despite being terrible at racing games, this is the view I had for most races. Screen grab from DIRT 5

Secondly, some of the race modes don't seem to be all that different from others. After playing the story for hours, a couple of the modes just seemed to blur together into one, and even if you were to put a gun to my head, I'm not sure I could tell the difference between Land Rush, Stampede and Rally Raid based solely on the gameplay. In fact, I was so worried that I was missing something huge that differentiated these modes that I actually went to the game website to read the 100-word descriptions, only to then realise that a few of the modes were only different in spirit, and not in actual mechanics.

Personally, my favourite two modes were Path Finder and Ice Breaker, because they were the most different from their counterparts. Path Finder involved a lot of vertical movement, with courses making you scale steep cliff faces and inclines, before slowing down the pace by throwing in a narrow, winding mountain route skirting a precipitous drop. Ice Breaker, on the other hand, is what it sounds like: A slippery, careening ride across a slick, ice-covered road. There's a lot of drifting involved, and very little control, which makes it really exciting and a bit frustrating. 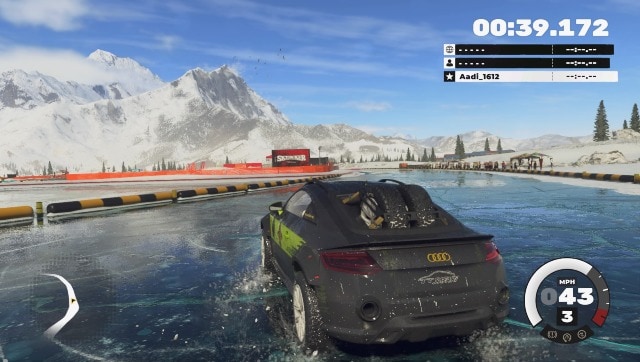 Here I am slipping and sliding my way across icy Nepalese roads in an Audi. Screen grab from DIRT 5

While DIRT 5's career is a fun single-player experience, its Arcade mode is bound to be the highlight of your living room, because it features something that has gone a little out of style for racing games in recent years — offline multiplayer! The split-screen racing mode allows you to pit yourself against three other people, and it is an absolute blast to play. I tried it out with two other players, as you can see in the image, and it was surprisingly easy to follow, even on my tiny television. 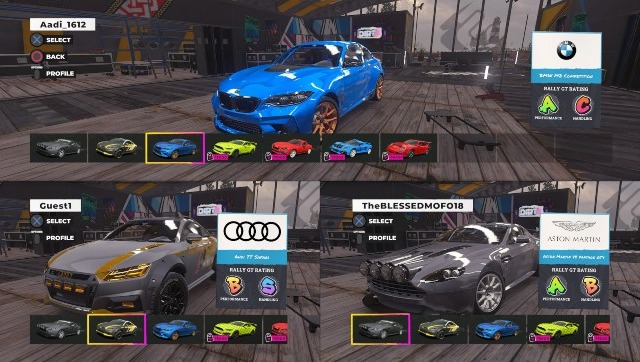 I have three cars active because I just have three controllers, but you can play split-screen with four players. Also, it's my 17-year-old brother whose PSN account is titled theBLESSEDMOFO18, for reasons unbeknownst to me. Screen grab from DIRT 5

Apart from the split-screen, all the modes in the story are available to play across the 70 different routes featured in the game, and if you want to get in a little practice, or just spend some time playing a particular type of race, you can do so in here. With the ability to change the number of laps, the type of event, the time of day and the weather, you can try out almost everything the game has to offer without having to sit through the entire story.

To be honest, I didn't play Online a lot. It's not because I didn't want to, it was because I just could not find anyone to play against. I tried to connect at several different times in the day, and I tried to change the server I was connecting to, but after several days, the best I could manage was a couple of 1v1 races in a mode that was clearly built to accommodate a multitude of players. To give the game the benefit of the doubt, it is quite new, and it's more than likely that as weeks go by, more players will start frequenting the Online mode. For now, all I can say is that the couple of games I played were quite fun, even though it was just against one other player, and I was beaten quite handily both times. If you're wondering why I've been so self-deprecating about my skills behind the virtual wheel, this is what my car looked like after my first race. Screen grab from DIRT 5

Playgrounds is a corner of DIRT 5 in which you can lose yourself for hours on end. It features the ability to create custom tracks, with a surprisingly diverse selection of ramps, barriers and whatever else you need to create your own X-Games style stunt course. There's a lot of standard track components like dirt platforms and tire barriers that you can use to make custom tracks, but there's also some zany stuff you can throw in like flaming rings to jump through and double-decker buses to jump over. There are only two locations which you can create your course in, namely Cape Town and Arizona, but with the plethora of options presented to you, it's easy enough to make something that looks unique in spite of the geographical limitations.

You can also share the tracks you create online, and race on some meticulously crafted tracks made by people with way too much time on their hands. I tried out a couple of the featured courses created by other gamers, and quickly learned that they are incredibly detailed and offer much more of a challenge than any of the game's standard courses. Along with the ability to create custom tracks of your own, you can also try out some meticulously crafted courses made by people with way too much time on their hands. Screen grab from DIRT 5

TL;DR: DIRT 5 has exhilarating, fast-paced gameplay that is bound to have you hooked from the get-go, but its story lacks depth and variety, and you're likely to get a little bored halfway through it. If you've been looking for a light-hearted, arcadey racing experience with thrills by the dozen, this is the game for you. If you're on the hunt for something a little deeper, maybe search elsewhere.

Game reviewed on PS4. Review code provided by the publisher.