CarryMinati opens up about life, his career plans, and what it means to be a streamer at Tech2 Innovate

CarryMinati also talks about facing depression and shares what he did to combat it.

Ajey Nagar aka CarryMinati is one of the most popular YouTubers in India, with over 10 million subscribers on YouTube. TIME Magazine named the 20-year-old ‘Next Generation Leader’ in 2019, and this young streamer also regularly makes videos on roasting and rapping. At Tech2 Innovate, he spoke to Network18 Digital Videos Head Ragini Verma about handling fame at a young age, his rap career and what he does to avoid getting mentally saturated. He also opens up about facing depression and shares what he did to combat it. Below is the entire exchange:

Editor’s note: Some responses have been edited for brevity. Ragini: It is wonderful to see the excitement in this room. Thank you so much for joining us at Tech2 Innovate. As you all know, 2018 and 2019, we have seen how technology has led to the rise of gaming in India. With the availability of affordable smartphones, cheap data and the Battle Royale game that you all love. What that has meant is we see in reports, that this could become a billion dollar industry, with about 350 million users by 2021.

There is a thriving gaming community which is present here today, a very engaged audience, hoards of players and some very big gaming stars. It is my pleasure to welcome them at Tech2 Innovate today. Ladies and gentleman, in fact boys and girls, this is Ajey Nagar aka CarryMinati. Thank you for joining us today.

Ok Ajey, let me begin by asking you, you started the CarryMinati channel in 2014. But, very few people know that you’ve been into content creation much before that. Having done that for much more than a decade, how does it feel to be this close to 10 million?

Carry: I would say till last year, I was very excited for 10 million, it is a big number. But, when we struggle for one thing for a longer period of time, then if one gets it, you feel like you have done it, so what after that? In my mind, I’m thinking about what to do next. I have to set a new benchmark.

Ragini: While we are on the subject, how many zeros are there in 10 million? (audience laughs).

Ragini: You became very popular and successful at a very young age. As a teenager, when you experienced such fame, what was it like? Tell us about the good and the bad of the experience.

Carry: Good things are obviously the love of the people. I have got love from my parents, but this is a different sort of love. It is a good thing, this is a kind of an addiction. When people send those lovely messages, my ego gets a boost. Being a teenager, your ego gets a super boost, that is a very good thing.

The downside I would say, is you have to work a lot for it. I have sacrificed a lot of things for it, like I didn't go to college.

Ragini: We all know that.

Carry: What do you mean we all know that (audience laughs)?

Ragini: It took you some time to figure out how many zeros there are in 10 million. So I just made a broad guess.

Carry: No, no. The audience was cheering, I was just letting them have it. That’s the big difference. So as I was saying, I didn’t go to college. I don’t even know how to drive a car.

Ragini: Happy to teach you. In real life I drive very well

Ragini: Once you become part of the PUBG universe, you are automatically plugged into a thriving community, and we can see it here (waves at audience).

Carry: I will tell you an interesting fact, ma’am. When you play the game with your friends. Suppose you’re playing with four people, and when you take a breath, all 4 of you take a breath simultaneously. Your breathing gets synchronized when you game together. Your gaming friends become your hardcore friends, because you bond with them on a different level. So if you want to get a girlfriend, you should play a game with her.

Ragini: You are too young to say such deep things. How old are you?

Ragini: At your age is when most people start evaluating career options. You have a decade behind you, a profession already. Do you feel you are stuck with it now? Would you have chosen differently if you had to pick options at this point of time?

Carry: I would in this industry when I joined, I was always the youngest. Everyone else was older than me. I would call them ‘Bhaiyya’ or ‘Sir’. I think they have a lot of wisdom. You learn when they share their wisdom with you. When I see a 20-year-old guy or girl, I still see them as children because they still have a lot to figure out.

Ragini: You are diversifying into music. We saw the song Zindagi, and it received an overwhelming response. Are you serious about rapping?

Carry: Yes, the things which I can’t say directly, I can express through music. Music is such a good thing and everybody listens to it. Through music, one can express so many things, which one would normally not feel comfortable doing. I had written Zindagi in September while I was going through hard times. My depression, anxiety was at its peak. I faced a lot of difficulties in my personal life, I faced a lot of difficulties in my career. I couldn’t show people my problems, but internally there were a lot of things happening. At that time, the song was an outlet to all that pain and grief.

Ragini: You know from the outside, it is difficult to imagine somebody so successful going through the frustration you’re talking about. Do you want to share more about it? Could you share it with a larger audience? If that’s something they’re grappling with, maybe there’s a lesson they can take away.

Carry: How many here are depressed? No one? (laughs)

Ragini: Everybody is happy looking at you...

Carry: It will happen someday or the other. Look, depression or anxiety are not things to be joked about. These things are very important. If you listen to it now, it would be beneficial, if not, it is your life. This phase will come at least once in your life, where you will experience anxiety, depression. Where you come to a low point in your life. But it’s very important that you experience it because these low points will make you stronger. It’s like a game level. What’s the first PUBG level? Bronze. You go from bronze to silver and to gold. If you are playing against gold level players daily, you will get used to it.

Then you shift to the platinum category, that’s where the challenge begins. So before you go to the platinum level, you need to have been in the gold level. In the same way, the more you deal with more problems in life, the stronger you become, and move ahead. So don’t be afraid of problems. Challenge them, say “ok come at me”, I’ll face you too and both will fight. Look, there’s always a happy ending. Remember this. It might seem fake, but there are always happy endings. You need to face your problems. I don’t know why I sometimes turn into Sandeep Maheshwari.

Ragini: To sustain one channel is a lot of work. In 2017, you started Carry is Live, and now you are also doing music. Has roasting taken a backseat?

Carry: Everything has a flow. That depends. For example, I made a video and I reached a saturation point on making roast videos. Then I decided I won’t make such videos for a week. In that week I make videos on streaming or music. When I get saturated with that I go back to videos. I keep playing between the three.

Ragini: It’s fun to visualise that. Carry finishes one roast, goes here and there and makes something else.

Carry: Yes, because those things are fun for me. But it’s also my job. So I’m having fun and doing my job at the same time and it’s a good feeling.

Ragini: You not only like PUBG but also like to play other games. Do you think the Indian gaming community is synonymous with the PUBG gaming community? Do you see that changing?

Carry: I would say that a lot more people are interested in PUBG because everybody has a smartphone, it’s more accessible. Not everybody has a PC or laptop. PUBG has its own community, other games also have their own communities, Lots of games older than PUBG like Counter-Strike, DOTA 2, have their own communities, but they are smaller than PUBG. Slowly, these games are catching up to the popularity of PUBG. People are taking interest in games, because of PUBG.

Ragini: You do it (play games) as a job. What do you do to unwind?

Carry: That is a good question. Because whatever is fun to you, is work for me. Gaming for you is pastime, a way to work out your frustration. But that’s my job. So I need to do old-people stuff like yoga, meditation to feel good from within. 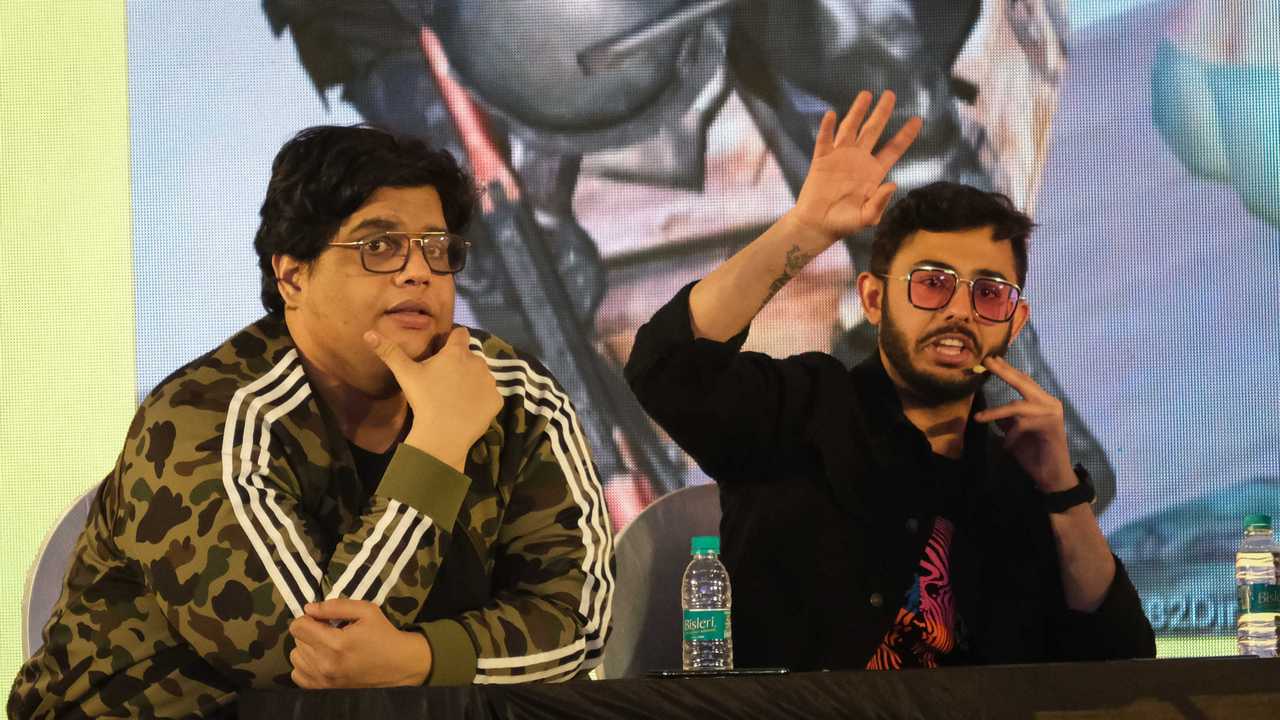 Ragini: You both [CarryMinati and Tanmay Bhatt] have one thing in common. A decade long career in what you are doing, in spite of the age difference. So, why don’t you share tips to people who aspire to become streamers, content creators?

Carry: How many people want to do YouTube?? (Audience raises hands) You should do it.

Ragini: Don’t stop at that.

Carry: You can learn just by observing streaming. Don’t observe it like an audience, rather do it as if it’s your job. Observe the little things, then you will understand how someone does that stuff, then your mind will open up. Even if you are watching a streamer or a normal YouTube video, think about what went behind its making. What was the thought process, how did they shoot it? Observe all that. When you start a YouTube channel, don’t think you can make a million subscribers in one day or even a million subscribers in 100 days. That’s really hard. The main thing is to keep doing it.

If you stop working on the channel, it will get finished. But instead, keep doing it as your hobby and wait it out. Do new things and try to evolve. Change is the only constant in life. Evolve the content, figure out what works and figure new things in life. Observe things.

Ragini: Basically, to sum it up. Uniqueness, your own style, self train, be consistent.

Carry: You just have to be yourself, because nobody can be you.

Ragini: Carry, how long do you think you will continue doing this?

Carry: I want to do it for the rest of my life. But, honestly I don’t know. Whatever plans I had two years ago, they have changed drastically and I think my current plans will change after two years. I think that every year I discover something new and it alters my view and my thinking. Rather than having a five year plan, I try to make a one year plan. But I really want to do music, gaming and roasting.

Ragini: You want to take it as it goes?