If you don’t mind investing in an external display, or already have access to a good one, you can get away with buying the A15.

I’m not entirely sold on the idea of the ASUS TUF Gaming A15 FA566IU.

Superficially, it’s a great laptop and it ticks all the right boxes. At just under a lakh, you’re getting a powerful AMD Ryzen 7 CPU (the first of its kind in India), an excellent mid-range GPU, a ‘fast’ 144 Hz display, a thermal design that won’t roast your palms or thighs, good battery life, and a very decent aesthetic.

Sadly, odd pricing and a couple of rather unusual design decisions means I just can’t recommend this specific model outright. The A15's Achiles Heel is its display.

This is a good config for the price, but there are three issues here:

First, that Ryzen 7 4800H is overkill. It’s one of the most powerful mobile CPUs you can buy today. In fact, it’ll put many mid-range desktop PCs to shame. The problem is that it’s paired with a mid-range graphics card — the 1660 Ti — which is simply never going to push that CPU to its limits. I’d have preferred a mid-range CPU with a more powerful GPU…

… which brings me neatly to issue #2.

For Rs 5,000 more, you can get a similar config with the more powerful, and feature-rich, Nvidia RTX 2060 GPU. That’s a 5 percent increase in price for dramatically improved performance in certain scenarios.

The third, and I believe the most egregious flaw, is the display. Sure, it’s a 144 Hz panel with Adaptive Sync (that translates to no visual tearing in games), but the panel is rated at 45 percent NTSC, which means its colour accuracy is garbage. To add to this, this specific panel has a pixel response time of 18-22 ms, nullifying any advantage that 144 Hz refresh rate brings. More on that later.

A fourth potential issue is thermal management, but it’s a relatively minor issue compared to the three aforementioned ones. I like the look and feel of the laptop. It feels rugged.

When it comes to gaming laptops, the purpose of a CPU is to not bottleneck the GPU. Gaming performance is almost always determined purely by the GPU, especially in budget systems.

A good CPU has its uses of course. If you’re a programmer or content creator, having additional cores or a faster CPU will significantly speed up your work, but we’re talking gaming laptops here, and in that regard, the FA566IU is just so much wasted potential. 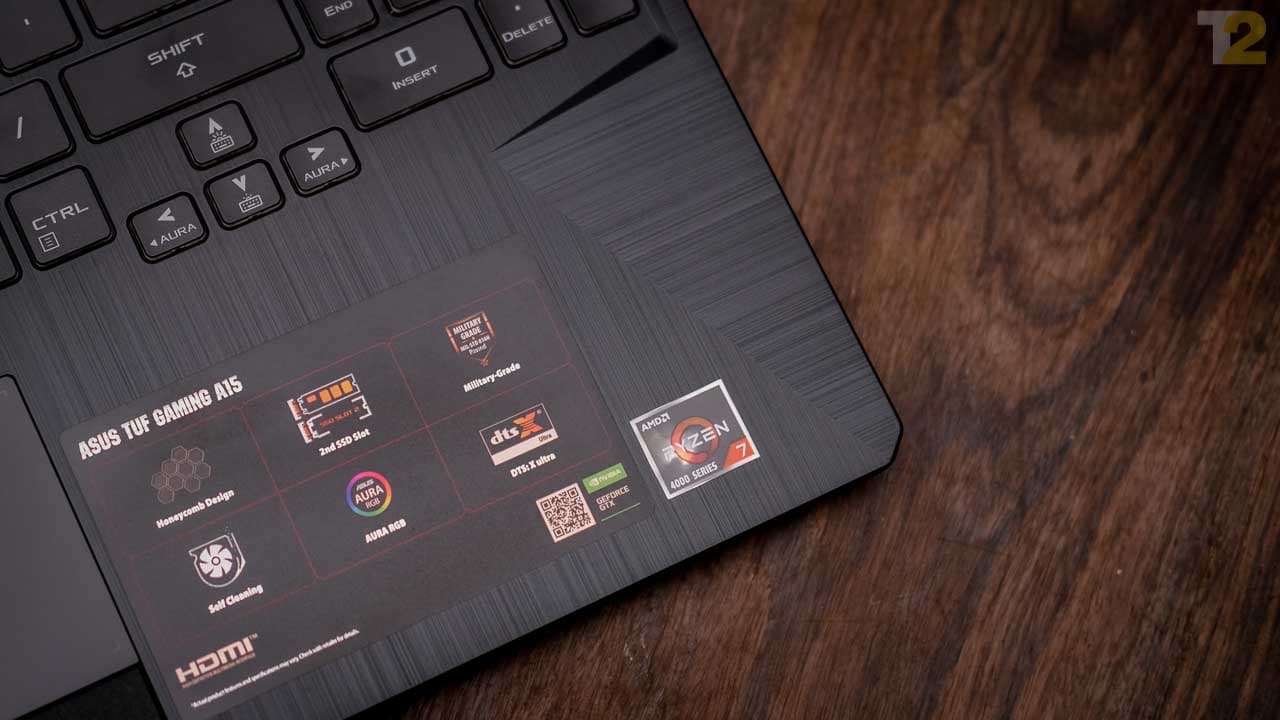 This is the first Ryzen 7-powered laptop in India

See, the CPU in this laptop is fantastic. It’s a game-changer. Looking at my data, the 4800H’s performance is only challenged by the MSI GT76 Titan, a beast of a machine that costs Rs 4 lakh, and which, with its fans running at full tilt, sounds like it’s preparing for lift-off.

The Mozilla Firefox compile test is relatively new, and the 4800H managed 31 minutes here, which is more than twice as fast as the average Ultrabook. The AMD Ryzen 7 4800H is seriously impressive. It's too bad that the GPU just can't keep up.

Every game I tested was bottle-necked at the GPU level. In fact, I never saw CPU load exceed 83 percent in any title. In most titles, the load was limited to under 70 percent.

To top it off, the 1660 Ti lacks proper support for ray-tracing features (i.e. RTX) and DLSS (Deep Learning Super-Sampling).

RTX is Nvidia-speak for a graphics rendering technique that generates realistic lighting in games. Once you’ve seen a game running with RTX enabled, you can’t go back.

DLSS is an Nvidia RTX-specific feature that intelligently and dynamically upscales graphics resolution to give you better performance at little to no perceivable loss in quality. Combined, these features make for a fantastic gaming experience. 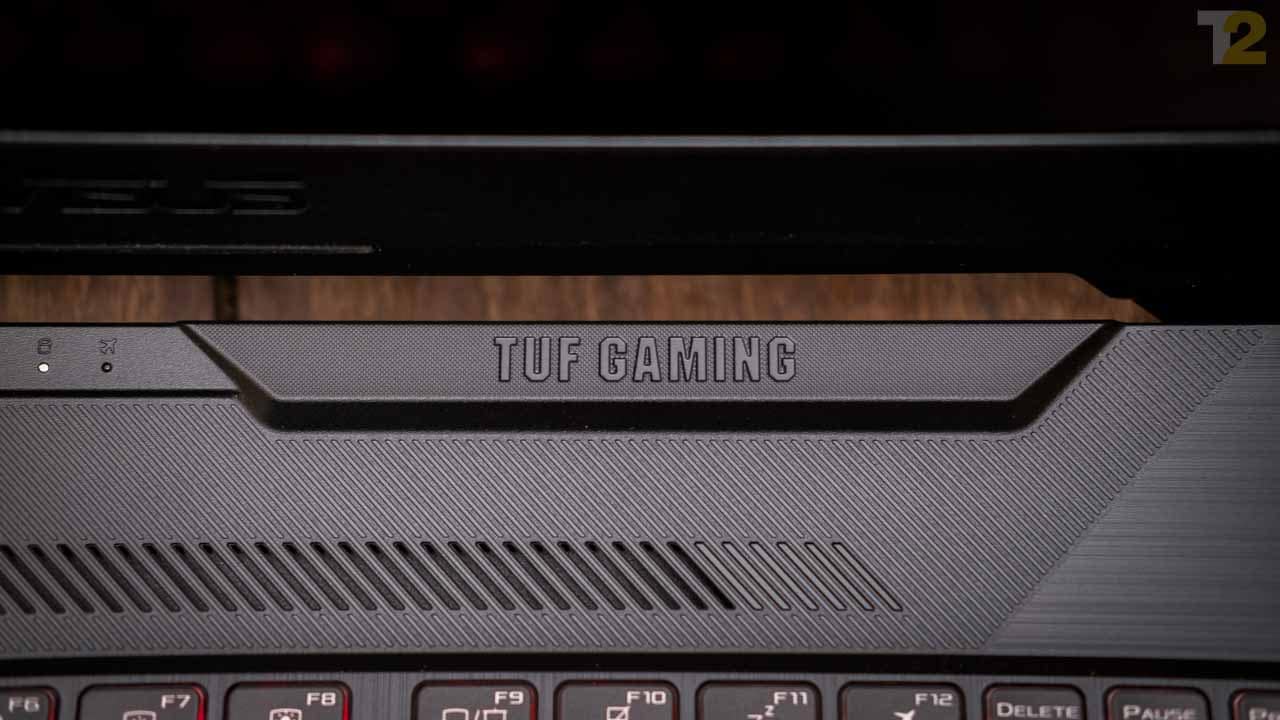 While this particular model didn't make the cut, the rest of the TUF line is certainly worth looking at.

Nvidia’s GTX cards like the 1660 do support RTX in some games, but at a tremendous performance penalty that makes the feature useless for anything but a demo. For instance, turning RTX on dropped Metro Exodus performance to sub-20 fps with the 1660 Ti. An RTX 2060 manages 40+ fps at the same settings.

Benchmark figures are otherwise quite nice. You’re getting 50 fps in Shadow of the Tomb Raider at max settings, 70+ in Metro Exodus at the ‘normal’ preset with RTX off, 52 fps in The Division 2 at Ultra, 60 fps in Borderlands 3 at high, 60 fps in Red Dead Redemption 2 using the ‘quality’ preset, and so on. It could even manage 60 fps at med-high settings in Call of Duty Modern Warfare with RTX off.

This is good stuff and I’d normally be happy with these scores, but the lack of RTX does sting when you know the feature can be had for just Rs 5,000 more. As a gamer, I see no reason to subject myself to a less than ideal experience.

Clearly, this config is unbalanced for gaming. ASUS should have offered a cheaper Ryzen 3 or 5 with the 1660 Ti and RTX 2060, and used the savings to offer a better display.

The movie-watching experience is passable, and you just can’t edit photos and videos without worrying about colour accuracy. 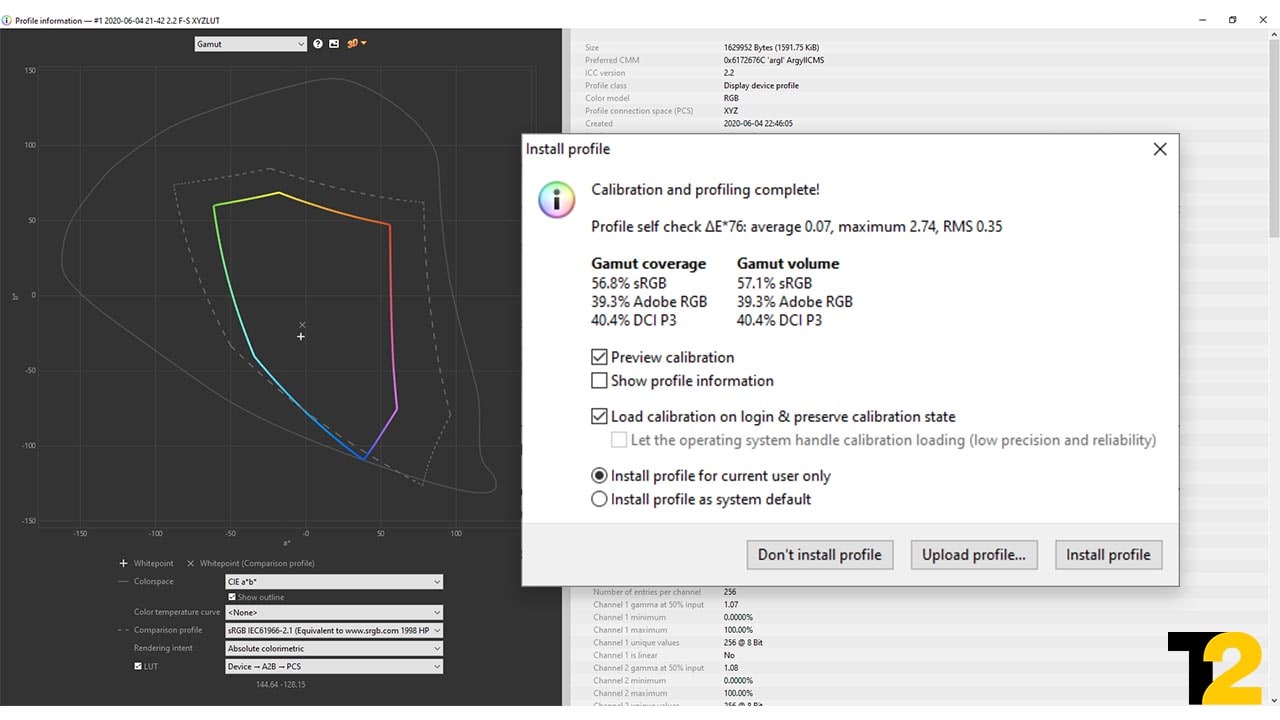 It's 2020, we should be demanding higher quality displays in our laptops.

Many laptop displays in this price range have the same awful colour gamut, however, so it’s not like we gamers are spoilt for choice in this segment.

Anyway, the laptop’s 144 Hz display does sound good on paper, but then the monitor’s response time is a terrible 18 ms. At 144 Hz, you can’t settle for anything less than 10 ms. 5 ms or lower would be ideal.

The refresh rate is the number of times per second that your monitor can update the image.

The response time is the amount of time it takes a single pixel on your monitor to transition from one colour to another. Usually, this is measured as the time taken for a pixel to go from grey to white to grey again.

While an image can refresh faster than the response time of a pixel, those images you’re seeing will not have accurate colours. And you’ll see ghosting.

The images below should illustrate why this is a problem. The first is an image shot on this review laptop while the UFO is scrolling horizontally at 144 fps and 7 pixels per frame. The panel claims to be 144 Hz but with a response time this bad, there's really no point.

As you can see, the ASUS shows significantly longer trailing ‘ghosts’ behind the UFO. This ghosting, as the phenomenon is aptly titled, is the bane of gamers everywhere. Heavier ghosting means blurrier movement, which means it’s that much harder to track and hit moving targets.

The rest of the spec is fine. Speakers are louder than what I’ve heard on gaming laptops in this price range, and the fan isn’t so loud as to drown out the speakers, even when running at max speed. 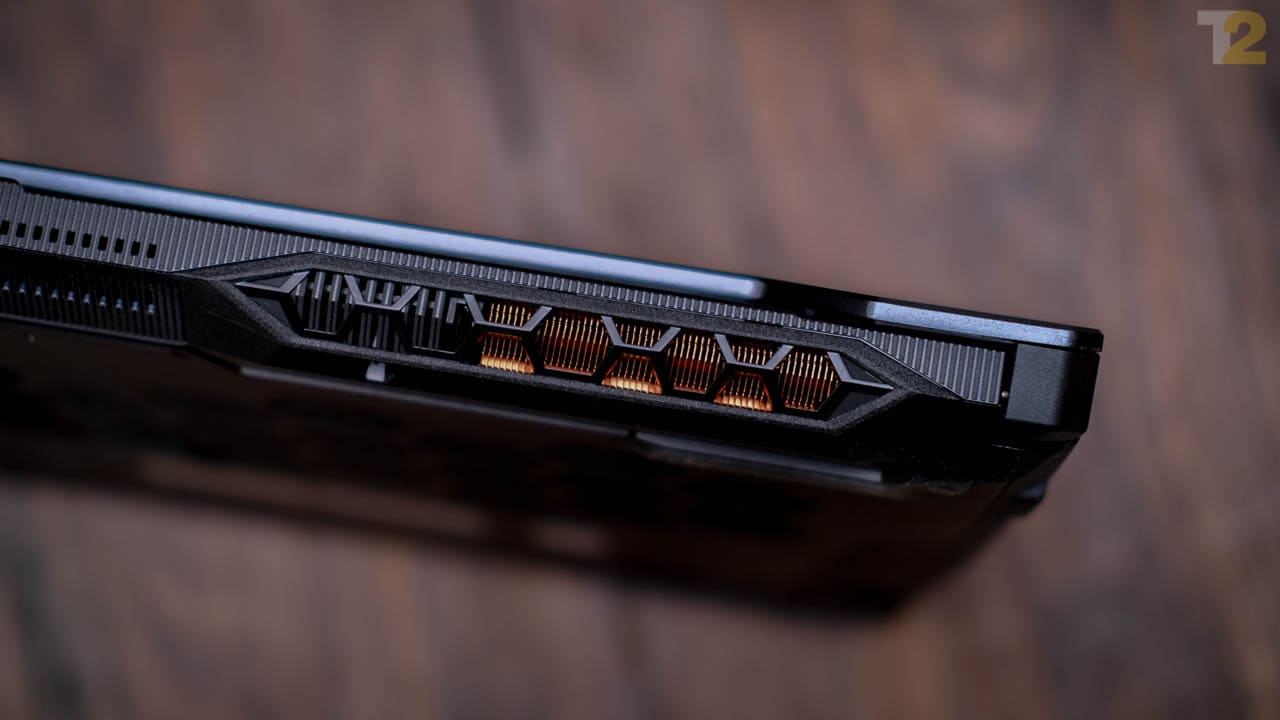 The cooling system isn't ideal, but it does the job.

The thermal design of this laptop has attracted some amount of controversy for allegedly being inadequate. Personally, I think the design, while not ideal (no heat sinks on VRMs, SSD placed directly under a heat pipe), does the job well enough to not need to worry about thermals. 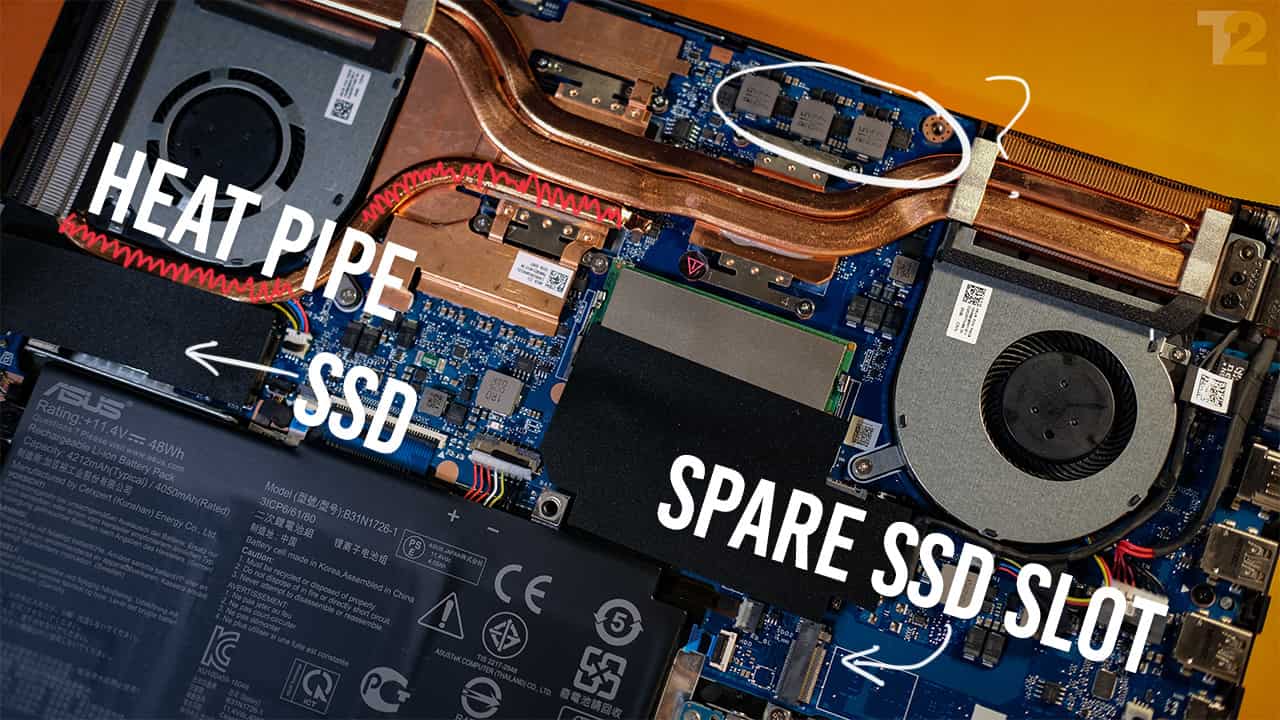 In my testing, the laptop routinely hit 85° C on the CPU and GPU, but in both cases, the components were power limited and not thermally throttled. The temps are indeed high, but no higher than what I’ve experienced on many gaming laptops in this form factor. The NVMe SSD in the TUF-A15 is quite capable. it does run a bit hot though, most likely owing to its placement under the heat pipes.

Maybe I was lucky, or maybe ASUS did some tweaking on the initial design that went out to reviewers. I honestly don’t know. I just know that thermally speaking, my unit performed at par or better than laptops in a similar form factor.

Honestly, I think the poor-quality display is a bigger issue than thermal management.

Verdict: To game or not to game

This brings me to my biggest issue with the machine: I don’t know who it’s for.

For gamers, the configuration isn’t good value. The CPU is overkill and the more powerful and capable RTX 2060 GPU option is just five percent more expensive. The display is also a problem because it lacks in both colour gamut and response time. Given the number of reports I’m seeing about thermal issues with the design, I also can’t blindly recommend the RTX 2060 option (which should run hotter) without thoroughly examining its performance. This 1660 Ti model is already nearing its thermal design limit.

For content creators, performance is excellent, but the display is a poor choice. There’s absolutely no way you can edit anything on this machine without wondering if you’ve screwed up the colours.

If you don’t mind investing in an external display, or already have access to a good one, you can get away with buying the A15. And even then, I’d very strongly suggest you skip this model and go for the Rs 1,00,000 RTX 2060 model instead.

Personally, I’m waiting on MSI, Dell, Lenovo, and the like, to refresh their gaming line-up to see if they have a better-specced machine on offer. ASUS’s own updated Zephyrus range should also be arriving soon. If you can wait, wait.

Note: ASUS tells us that COVID-19 issues have affected logistics, which is why we don’t have the RTX 2060 model for review yet.