The Gladius II is an impressive gaming mouse from ASUS and you can’t go wrong with a purchase. It's precise and accurate and comes with RGB lighting

Over a period of 20 years of gaming, I’ve testing my fair share of gaming mice, ranging from pseudo-gaming mice selling for Rs 500 to high-end, customisable mice costing in excess of Rs 15,000. Of all the mice I’ve used, only two stand out, the Razer DeathAdder and the Logitech G502 Proteus Core. I like the DeathAdder for its simplicity and unmatched ergonomics, and the G502 for its great ergonomics, freewheeling scroll wheel and plethora of accessible buttons.

The ASUS ROG Gladius II needs to convince me to give up one of these mice. Did it succeed? 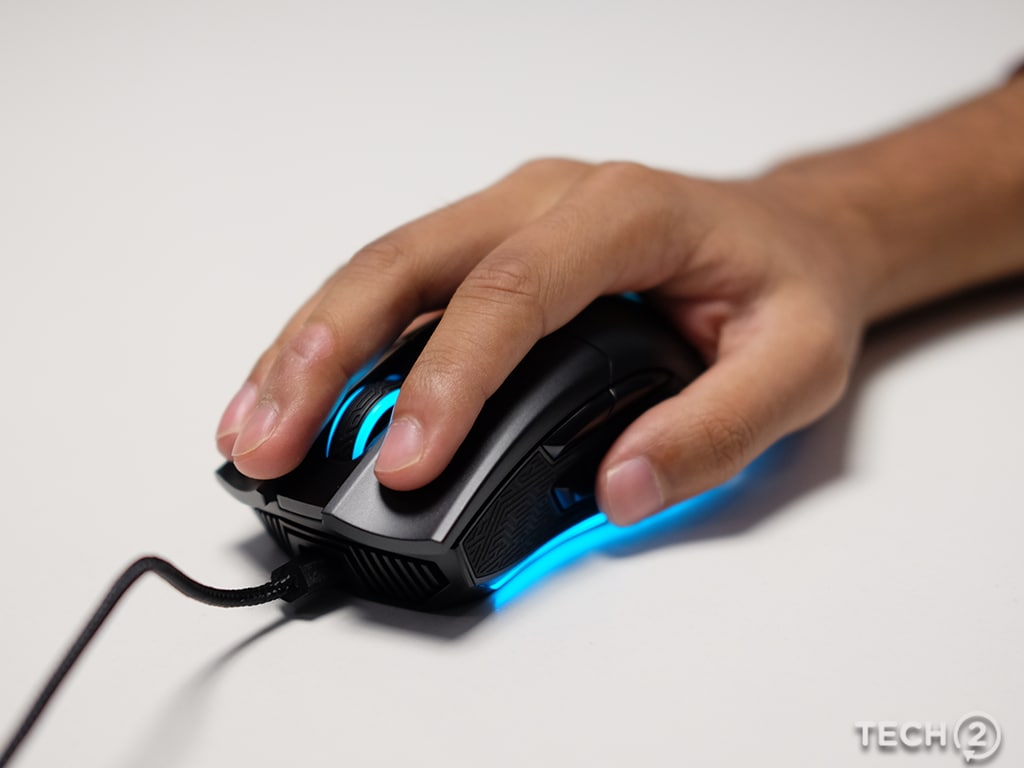 The mouse is very comfortable to use

In terms of specifications, the Gladius II offers a sensor capable of handling 12,000 DPI and 50 g of acceleration. The device also supports a 1,000 Hz polling rate over USB and offers Omron mechanical key switches with a rated durability of 50 million keystrokes. Better yet, the mouse comes with an extra pair of Omron switches so you can adjust the click resistance. The USB cable is detachable and you get the option of using a short cable or a longer, braided cable. The option is nice to have as having a shorter cable for laptop use is a blessing. The included pouch is another nice addition to the package. The mouse is designed for right-handed gamers

For buttons, you have the usual left and right-click buttons, a standard scroll wheel with middle-click, two thumb buttons on the left and a third “sniper” button on the left as well. A button placed behind the scroll wheel can be used to adjust the mouse DPI or profile as necessary. Oh, and the mouse supports RGB lighting.

In terms of ergonomics, the mouse feels great. I still think that the DeathAdder offers the better grip, but I’ve used that mouse for over four years and it’s unlikely that my hand will fall naturally on any other mouse, in the short term anyway. Ignoring my bias, I think the mouse feels great and that users will not have anything to complain about. The buttons fell naturally to my fingers and thumb and are ergonomically contoured, so they’re easy to access. The mouse also feels very sturdy. The lighting is very bright

After fine-tuning the DPI in the ROG Armoury software, I played a few games, including PUBG, Battlefield 1 and Starcraft II. The mouse felt precise and accurate everywhere. The sniper button, which reduces sensitivity while the button is depressed, responded instantly when used.

The buttons are ergonomically placed and responsive

The RGB lighting on this mouse is, I think, particularly well done. On the default setting, it cycles through various RGB shades at a rather alarming rate, but you can adjust this in the settings. The lighting is also much brighter than I was expecting and I quite liked it like that. At night, the psychedelic colour show can keep you awake, however. The top view of the mouse

ASUS says that the mouse comes with a feature called Aura Sync, where it’ll sync lighting profiles with Aura Sync compatible keyboards and motherboards. Not having either of the two, I can’t really comment on this feature.

Either way, this is a great mouse with excellent RGB lighting. However, it’s pricing pits it against some rather stiff competition. The bottom view of the mouse

While the MRP is higher, the mouse can be had for Rs 5,200 and it comes with a one-year warranty.

At this price, the mouse is competing directly with Razer’s stellar DeathAdder and Logitech’s G502.

Versus the Razer DeathAdder:

While I’m biased towards the DeathAdder’s ergonomics, the model I bought cost me Rs 3,000. Today, however, you can buy the DeathAdder Elite for Rs 5,300. The Elite offers a higher resolution sensor (16,000 DPI) and a better tracking rate of 450 IPS (vs 250 on the Gladius II). You also get Omron switches, though you don’t get spare ones. The Elite supports RGB lighting.

In this comparison, I think the Gladius II sneaks ahead, but only by a hair. Unless you know that you need 16,000 DPI and 450 IPS, the Gladius II is perfectly fine. The replaceable Omron switches and detachable cables also tip the balance ever so slightly in the Gladius II’s favour.

Versus the Logitech G502 Proteus Spectrum:

The G502 retails for around Rs 5,800. It offers more buttons, mechanical switches, RGB lighting, tuneable weights, a freewheeling scroll-wheel and killer ergonomics. The sensor offers the same DPI as the Gladius II.

Here, there’s no arguing with the feature-set on offer. The G502 is just as capable as the Gladius II, is more customisable and once you get used to it, you can’t live without that freewheeling scroll wheel. The G502 is more expensive, but it’s also offering a lot more.

The Gladius II is an impressive gaming mouse from ASUS and you can’t go wrong with a purchase. It’s precise and accurate and heavy gamers should have no complaints on that front. Given the pricing, however, I do think it’s worth spending that Rs 600 more and getting the G502.