Implementing our tips pertaining to these three key areas of the game should lay down a solid foundation for success.

Whether you’re new to the Battle Royale genre or just wondering if your skills from PUBG or Fortnite can be carried over to Respawn Entertainment’s hot new game Apex legends, this is the first thing you should read before leading two of your friends to what would otherwise be guaranteed slaughter. This guide works even if you’re fairly experienced with the Battle Royale genre. Getting acquainted with the many new genius-level gameplay and balance-driven tweaks employed by the good lads at Respawn could prove to be the magic ingredient that takes your game to the next level. Sit down and make a mental note of these tips and tricks that will give you the decisive edge in Apex Legends.

Although Apex Legends adheres to the quintessential quad-based Battle Royale formula, it breaks the mould by borrowing the concept of heroes with unique abilities from Overwatch. That means, stubbornly sticking to one character is just as bad as randomly choosing one without the intention to strategise its perks and abilities. If you’re playing with friends, make sure you plan out Legend selection to complement each other to fill in any gaps between your legends.

This is also important when you’re depending on online matchmaking to squad up with complete strangers. You can place your mouse cursor on the Legend you want while waiting for your turn to choose one in the lobby. This highlights the legend you prefer to your teammates, so each one can pick accordingly to balance out the team. All without having to use the microphone. The first one to choose can technically pick any Legend, so the onus lies on the second and third players to choose their legends tactically. In other words, it would be wise to choose a healer if your team hasn’t chosen one. 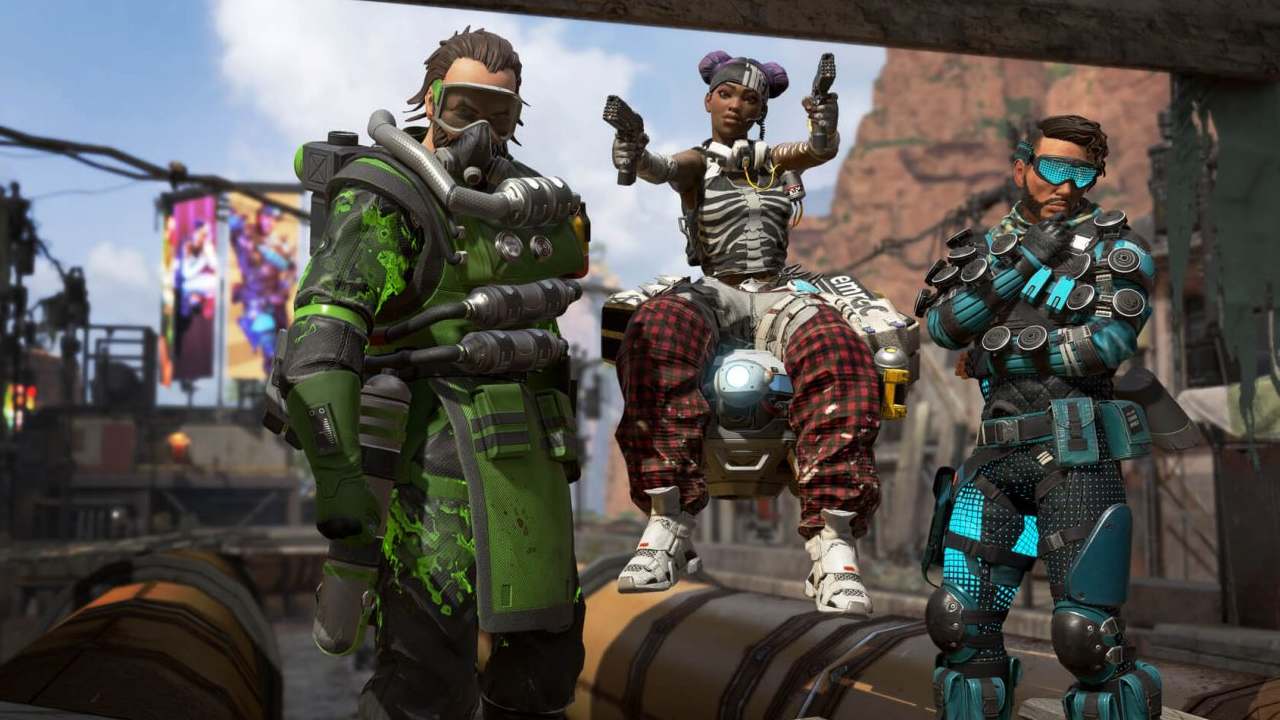 Here’s a brief summary of the key abilities of each legend:

The legend Bloodhound is primarily a tracker. He can not only spot tracks left behind by enemies but also reveal traps and clues for both you and your teammates.

Similar to Overwatch’s Reinhardt, Gibraltar is the quintessential tank class. He automatically deploys a gun shield that absorbs enemy fire when aiming down the sights, in addition to creating a 15-second dome shield and calling in mortar strikes.

Lifeline is a combat medic that heals and revives knocked down enemies faster. She can also call in high-quality defensive gear for the team once per match.

Pathfinder is a forward scout that can zip around the map or reel in enemies with the grappling hook and even create ziplines for quick traversal.

Wraith can phase shift into an alternate dimension to avoid damage and link two locations with portals for a limited time.

Bangalore can move fast when taking damage, use smoke for cover and escape, and call in artillery strikes against enemies.

Caustic is an unlockable Legend that can create confusion and deal poison damage to enemies by deploying gas traps. His ultimate ability lets him saturate a large area with poison gas that allows him to spot enemies caught within while they take increasing amounts of damage.

Mirage is another unlockable Legend that can cloak and drop decoys to confuse enemies and reveal their position. 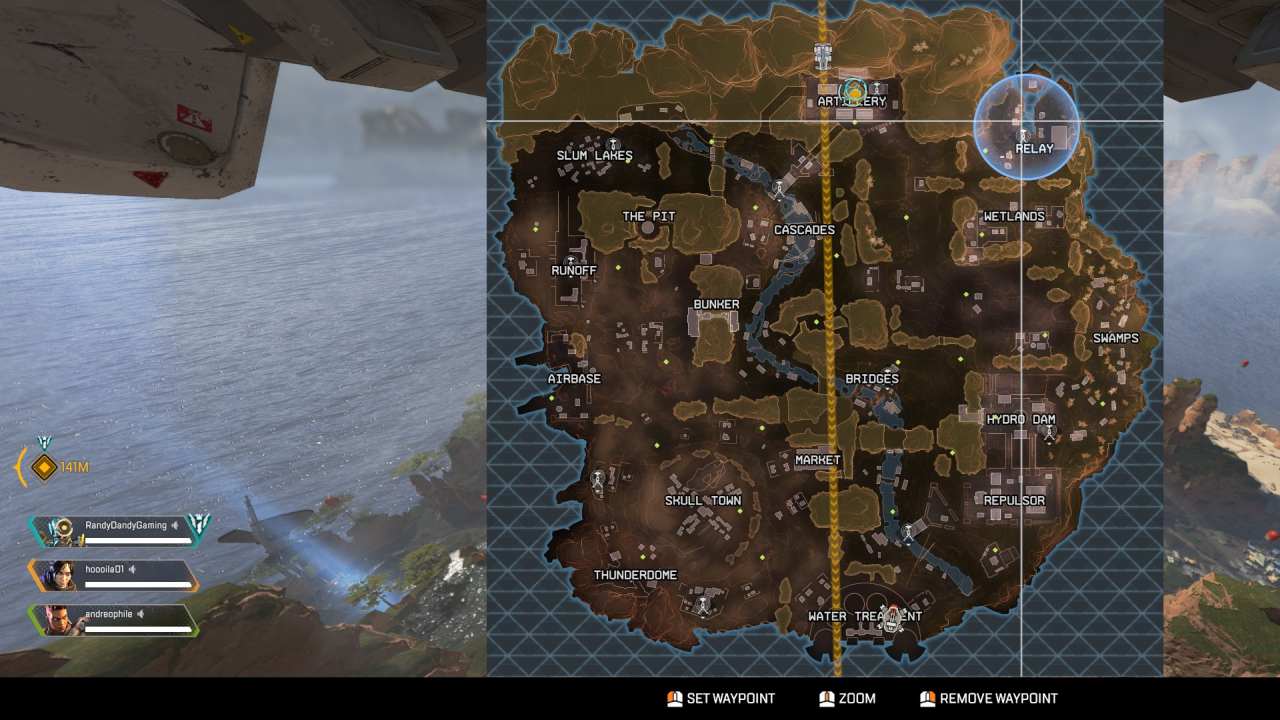 Apex legends’ only map — Kings Canyon — can be an unforgiving place. Respawn Entertainment, however, have designed it wisely to accommodate both aggressive as well as defensive players. The entire map is a cohesive amalgamation of several smaller zones. These zones work like interconnected mini-levels — these include a water treatment facility, hydroelectric dam, air base and bunker – with each one of these not only appearing distinct but also favouring different gameplay styles.

As a defensive player, your primary goal would be to land near structures where you can find decent loot, while also avoiding busy areas which invariably turn into killing grounds for anyone unlucky enough to encounter an enemy with better guns and gear. A good way to do that is to wait (along with your team, of course) for most other teams to disembark the Drop Ship. Doing so allows you to observe the colour trails of enemy teams and estimate where everyone is headed.

Defensive players should also study the map before jumping off the Drop Ship with the express intention to avoid Hot Zones. As the name suggests, these areas marked by blue circles on the map have better quality as well as quantity of loot. These are also the only places on the map where you can find weapons already outfitted with all possible attachments. 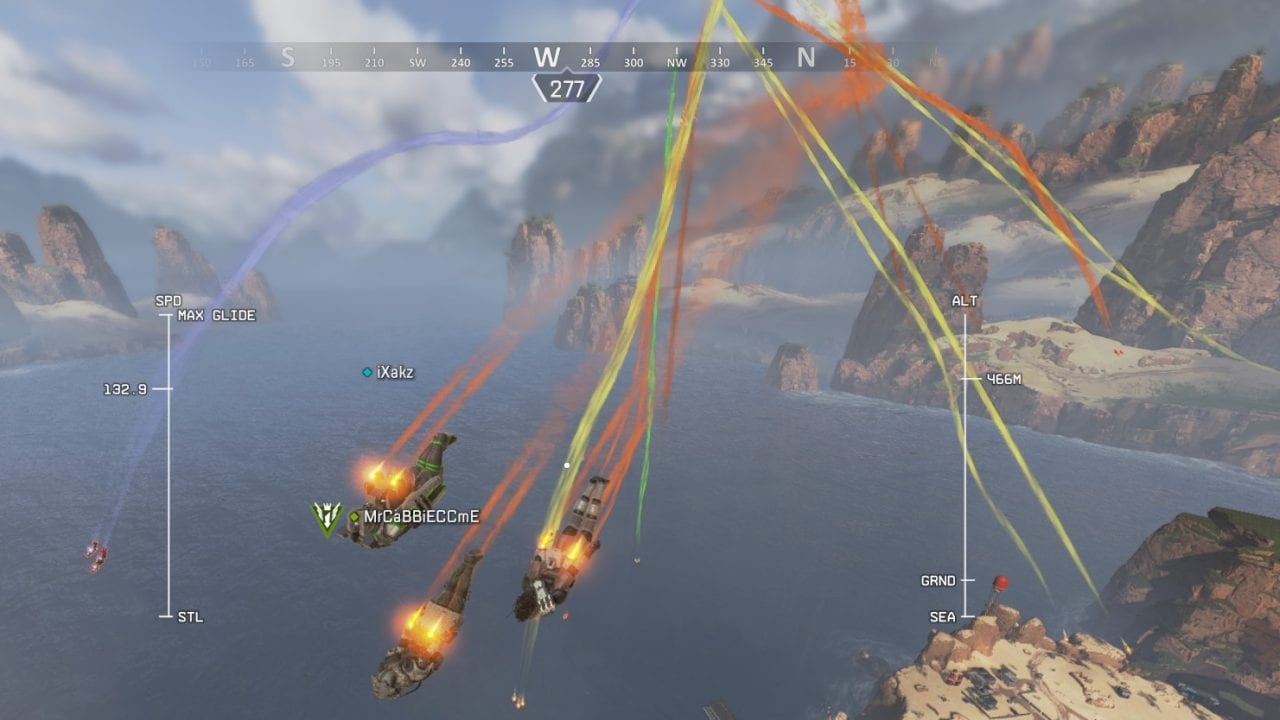 Watch where rival teams are headed and plan accordingly

Aggressive players have yet another avenue for quick loot and early skirmishes in the form of the Supply Ship. These are huge aircraft similar to Drop Ships but containing a good quantity of high-quality loot. You can either jump onto them immediately from your Drop Ship or later in the game by taking a randomly generated zipline from the ground. The former option will get you the best loot provided the Supply Ship has spawned close enough to the Drop Ship. Just don’t forget that others have the same idea too. However, you can always jump ship without taking falling damage, just in case the enemy manages to grab the high-powered weapons before you.

Planning where you want to land beforehand makes sense if you’re playing with your squad. Those who choose to match up with random players can use the context-sensitive ping features to suggest a landing location to the jumpmaster either directly or from the map. Whatever you do, make sure you stick with your team for obvious reasons. You can, however, disengage from the team moments prior to landing. Doing so is great to avoid raiding the same building, which can deprive either one of you of good weapons and equipment.

Knowing Your Weapons and Attachments

Like any well-designed game, Apex Legends stands out with its well-balanced weapons and strategic use of attachments. The firepower might not feature licensed real-world guns, but it is nonetheless classified according to real-world weapons categories. This includes pistols, submachine guns, shotguns, assault rifles, light machine guns and sniper rifles. The standard weapon strategies also apply here. It’s smart to re-distribute weapons within your team for a more balanced team weapon loadout. A three-man team packing shotguns and SMGs is nowhere near as effective as one with shotguns, submachine guns, and assault/sniper rifles. It is smarter to reserve pistols only as makeshift weapons for defensive usage until you find more powerful alternatives. Submachine guns have a higher rate of fire and more controllable recoil/muzzle climb, thereby making them suitable for short to medium range engagements. Shotguns are incredibly powerful in this game and should be an indispensable part of your two-gun loadout, unless you’re partial to sniping and prefer an assault rifle as the backup weapon.

There are a few exceptions to these rules, especially when you factor in weapon attachments. The Wingman pistol, for example, has a very high damage rating. The pistol becomes even more deadly when you pair it with the Skullpiercer attachment for headshots. The Prowler submachine gun’s 5-round burst might be limiting, but slap on the Select-fire receiver attachment and the weapon becomes a full-auto powerhouse. The Hemlock burst assault rifle can be similarly converted to an overpowered single-shot rifle.

Being on the lookout for good attachments can improve your weapon considerably. While optical sights allow you to upgrade from standard iron sights and tune your weapon for better close, medium and long-range target acquisition, there are plenty of other attachments that improve weapon traits such as lethality, accuracy, rate of fire and spread patterns. Shotgun specific attachments such as precision chokes and bolts concentrate shot spread and improve rate of fire. Barrel stabilisers and upgrade stocks, on the other hand, improve the accuracy, recoil, and handling of rifles and submachine guns. The weapon hierarchy is also disrupted by rare weapons such as the Mastiff shotgun and Kraber 0.50-cal sniper rifle. These weapons cannot be reloaded and come with limited ammunition, but they more than make up for these shortcomings by virtually guaranteeing one-shot kills. Needless to say, don’t hesitate to grab one if you are lucky enough to come across either one of these. As a rule of thumb, spend some time in the training range to familiarise yourself with the weapons. Most rapid-fire weapons (with the exception of the light machineguns) exhibit predictable muzzle climb, which is easy to compensate for with enough practice.

Follow these basic survival tips and achieving success becomes that much easier. Combining these guidelines with some amount of practice and familiarisation should get you up-to-speed and racking kills quicker than you otherwise would. Good luck and happy hunting.

Apex Legends Guide: How to nail your first victory within hours of starting out